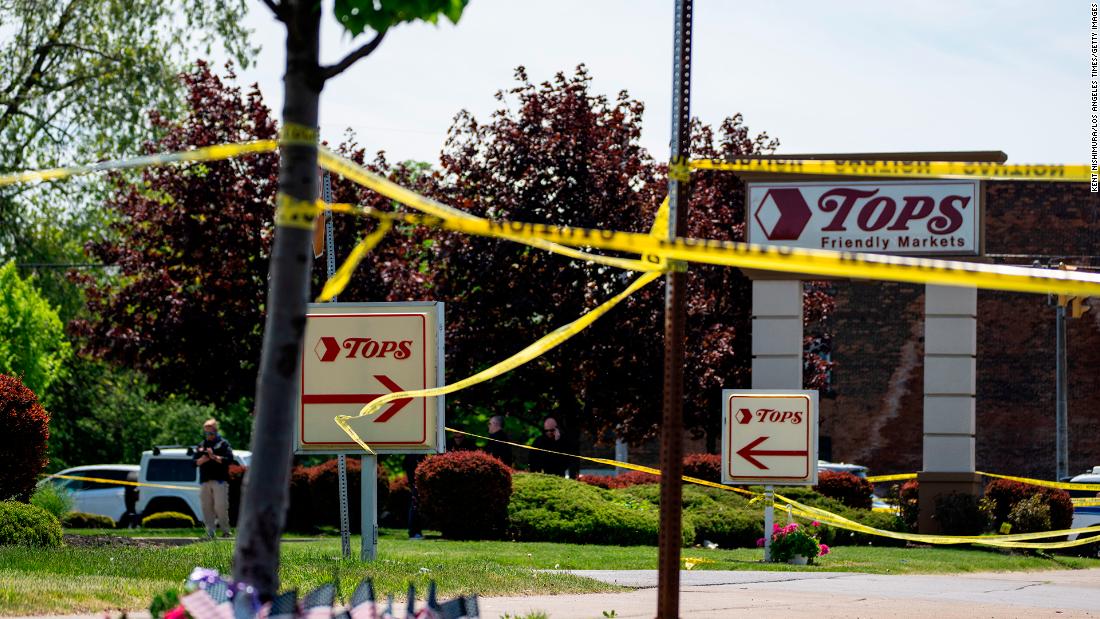 The hate-filled forum 4chan, where all users post anonymously, appears to be at the center of the made-for-the-internet massacre that took place in a Buffalo supermarket on Saturday — from discussion on the platform apparently helping inspire the alleged attacker to spreading the gruesome video of the shooting.
A 180-page document that has been attributed to the man suspected of the shooting, in which 10 people were killed, references how he was influenced by what he saw on 4chan, including how he was inspired by watching a video of the 2019 mass shootings in Christchurch, New Zealand — which were also streamed live.
Ben Decker, the CEO of Memetica, a threat analysis company, told CNN, “this is a step-by-step copycat attack of Christchurch, in both the real-world attack; planning and selecting the target, and online; coordinating the livestream and manifesto dissemination across fringe message boards.”

4chan, which was created in 2003, claims it receives 22 million unique visitors a month, half of whom it says are in the United States.

While the site hosts forums on a variety of topics — including video games, memes and anime — and says it has rules against racism, its lax approach to content moderation means that hate speech not allowed by more mainstream platforms spreads more freely on 4chan.

4chan is part of the internet’s Wild West. While Big Tech platforms like Facebook and Twitter at least try to police their sites, almost anything goes on 4Chan. Some parts of its forums are almost exclusively dedicated to the sharing of racist and antisemitic memes and tropes.

A similar site, 8kun — which was originally called 8chan, and was spun out of 4chan when that forum banned the movement known as Gamergate — has been linked to other atrocities.

Immediately following the Buffalo shooting, some users on 4chan did not discuss the horrific loss of human life but instead shared methods for reuploading the shooting video so it could be seen by more people.

Twitch, the Amazon-owned service on which the shooter had livestreamed part of the attack, said it removed the video for violating its policies two minutes after the violence in the video began. The actual live stream itself had only been seen by a small number of people, perhaps as few as 20 or so, according to screenshots that have circulated of the stream.

4channers who had apparently screen-recorded the live stream discussed tactics for re-uploading the video to other sites, and services that could be used to hide their identity as they did so.

By Sunday, copies of the video were circulating across the internet. Some of those copies were reportedly viewed millions of times.

We don’t have statistics for the Buffalo video yet, but in the 24 hours after the Christchurch shooting, Facebook said it removed 1.5 million copies of the shooter’s video.

The preservation and sharing of these videos by far-right communities on 4chan and other fringe message boards can help inspire further bloodshed, according to Decker, as evidenced by what the Buffalo suspect wrote in his alleged document.