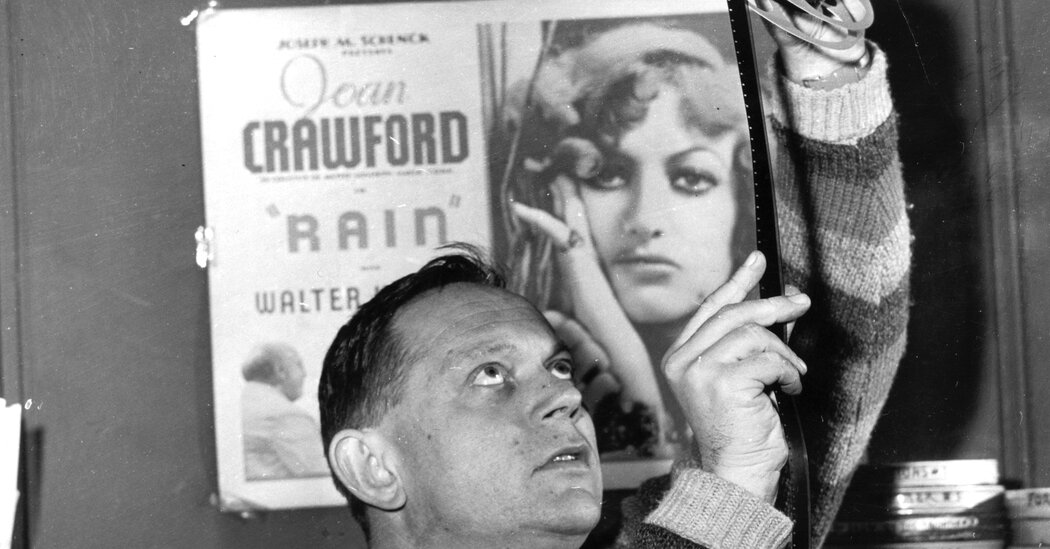 Vogel was America’s seminal film programmer, and so it’s fitting that for his centenary he’s the subject of a citywide tribute now at the New York Film Festival and moving to other theaters later in the season. His New York Times obituary from 2012 begins with the blunt statement that he “exerted an influence on the history of film that few other non-filmmakers can claim.” In 1947, he and his wife, Marcia Vogel, founded Cinema 16, the most important membership film society in American history; after its demise, he directed the New York Film Festival for the first five years of its existence.

After being forced out or resigning (accounts vary), Vogel then wrote a book, “Film as a Subversive Art,” an encyclopedic cinematic cabinet of wonders that — with chapters like “The Power of the Visual Taboo” and a still from Dusan Makavejev’s outrageous “WR: Mysteries of the Organism” on the cover — is something like the programmer’s bible. (A revised edition will be available next month from Film Desk Books.) The book is “inexhaustible,” the New York Film Festival’s current director of programming, Dennis Lim, told me via email. “It’s an endless source of ideas but also a reminder of the possibilities of film exhibition and curation.”

A child of Vienna’s ninth district — the neighborhood of Freud and Schoenberg — Amos Vogelbaum was one of the many cultural gifts thrust upon America when the Nazis took power in Central Europe. Vogel and his parents lived for six months under Nazi rule before escaping Vienna for New York, by way of Cuba.

His initial impulse was to study agriculture and move to a kibbutz. Disillusionment with Israel’s development prompted him to stay in the United States and found another sort of utopian society, Cinema 16. Inspired by the example of the avant-garde filmmaker Maya Deren, the Vogels began exhibiting a range of movies — experimental psychodramas, poetic documentaries, abstract animations, banned French bedroom farces and forgotten classics, complete with notes. Cinema 16 originally charged admission but switched to yearly subscriptions so as to avoid New York State’s draconian censorship laws.

At its height, in the late 1950s, Cinema 16 had some 7,000 members and regularly filled a 1,600-seat auditorium. It also doubled as a distributor for filmmakers as difficult as Kenneth Anger and Stan Brakhage. In addition to promoting the “beat” cinema of “Pull My Daisy” and “The Flower Thief,” Cinema 16 provided American premieres for Jean Renoir’s “The Rules of the Game” (introduced by Renoir), several of Luis Buñuel’s Mexican films, and movies by the great Japanese directors Yasujiro Ozu and Nagisa Oshima. Cinema 16 also showed the first short films by Agnès Varda and Melvin Van Peebles, among many others.

As a programmer, Vogel was a master of the mix and match. One particularly great show included Carl Theodor Dreyer’s expressionist horror film “Vampyr” (1932), Kenneth Anger’s homoerotic home movie “Fireworks” (1947) and George Franju’s surreal abattoir documentary “Blood of the Beasts” (1949). Vogel’s programs typically juxtaposed avant-garde work and short documentaries with scientific fare. (As befits his Viennese roots, he had a fondness for psychiatric shorts like “Experimental Masochism” or “Unconscious Motivation.”)

When I met Amos, some 20 years after the Voice article, he was less combative than amiably avuncular. Gently, he reprimanded me for having written a purposelessly contentious piece about a long-ago contretemps occasioned by his refusal to show Brakhage’s “Anticipation of the Night” at Cinema 16. “One decision should not define a career,” he told me, words that might serve as a film critic’s motto.

He had a profound sense of mission. During his time at the festival, he fought budget cuts and strove to create something like the American Film Institute at Lincoln Center. He was opposed to any sort of commercialization, genuinely shocked that what was then known as the Film Society of Lincoln Center might accept money from Philip Morris, aghast that the year he quit, the opening film was a trendy Hollywood comedy, “Bob & Carol & Ted & Alice.”

Upon joining the festival selection committee, I naïvely suggested distributing free tickets to avant-garde filmmakers and other needy types. “Amos used to do that” came the disapproving answer. The Vogel festival was generous. It was ridiculously easy to crash the press screenings and there were dozens of sidebar screenings and discussions at the New York Public Library for the Performing Arts that, if memory serves, were virtually free.

“We show what can be done if certain cultural elements and the serious art or documentary are brought together,” Vogel had told the Voice in 1961. “There lies the basis for a film culture. But who knows in America if such a condition will ever spread and really take hold?”

If it has, the esteem in which Vogel is held by his successors can be gauged by the unprecedented attention paid his centennial. The festival has been presenting a seven-part “Spotlight” series dedicated to Vogel’s programming, recreating specific shows and presenting favorite movies. Later this month, Anthology Film Archives will show eight reconstructed Cinema 16 bills, and the Museum of Modern Art will screen five programs with a science and nature theme. In November, Film Forum is reprising a tribute to Cinema 16 shown in 1986. The Museum of the Moving Image, Metrograph and Light Industry are also taking part, drawing on “Film as a Subversive Art.” Outside New York, the Arsenal in Berlin and the Austrian Film Museum in Vienna have organized similar multipart events.

“Vogel” is German for “bird.” With due respect to Charlie Parker, the message this season is Vogel Lebt, “Bird Lives!”