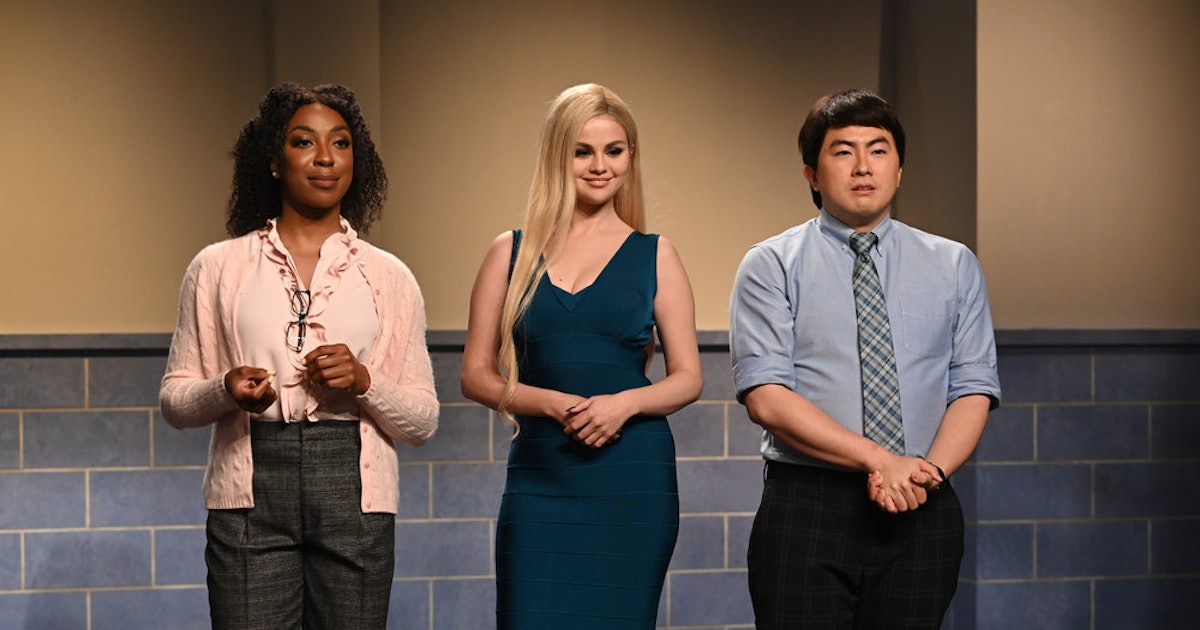 Hosting Saturday Night Live for the first time was a big deal for Selena Gomez, but she made it look easy. The Only Murders in the Building star wowed fans as she embodied very different characters — and even pulled off a whole range of wigs. In fact, tweets about her SNL debut raved about the many high points of the night, from her Barney sing-along to her versatility as an actor.

Leading up to the show, Gomez had quipped on Instagram, “Mom…I think I’ve made it,” about getting the chance to host. She added that she was “so grateful and excited” for the gig, and then went on to expand upon that feeling in her monologue. “I’m so excited to be here,” she began. “Growing up, I used to watch SNL every Saturday with my mom. … This is a big moment for me.”

It was a big moment for her fans, too, especially those who remember her as one of the kids on Barney. She embraced her first role in her monologue, calling the purple dinosaur one of “Hollywood’s icons.” Other gems included Gomez’s jokes about her love life, her Miley Cyrus impression, and her careful comments about her Only Murders co-stars.

To really get people nostalgic, Gomez circled back to Barney at the end of her monologue and got the audience to sing the show’s theme song with her. Viewers loved it, including one fan who called it “amazing.”

All Those Wigs And Characters

Gomez had more than one trick up her sleeve, and fans loved how she got to display her versatility on SNL. Many were obsessed with her distinct looks for each character, too. “Selena acted in 9 different characters and smashed in all of them,” one viewer tweeted.

A lot of the tweets celebrated the multihyphenate’s acting skills, especially her comedic chops. “Of course Selena Gomez is doing well on SNL,” one fan wrote. “She’s genuinely funny. Did y’all forget that or…?”

Countless people gushed over how Gomez did as host. One referred to her SNL episode as they best they’ve seen “in a minnnnute” and another suggested that the show needed her more than the other way around.

There’s just one episode left in Saturday Night Live Season 47 and Natasha Lyonne is already set to host. If SNL were to bring Gomez back next season, though, fans would definitely be on board. In the words of one, “Selena needs to host SNL every week and SNL should be renamed to ‘Selena Night Live.’”

Let it be known that fans would love to see Gomez follow in the footsteps of her Only Murders co-stars Steve Martin and Martin Short and turn her first time as SNL host into one of many appearances.

Get Even More From Bustle — Sign Up For The Newsletter