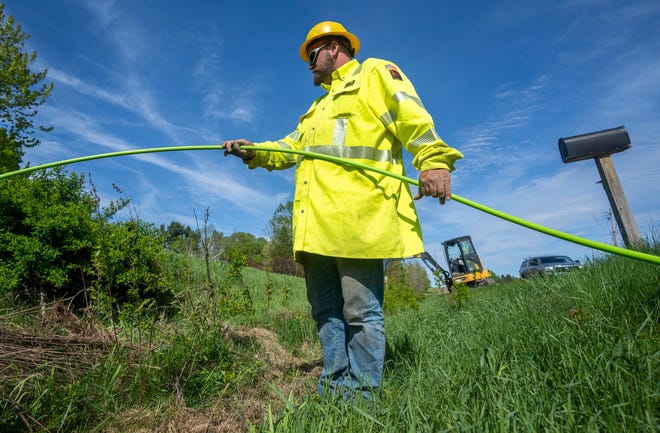 The number of Wisconsin families without high-speed internet could be much higher than was known earlier even as hundreds of millions of dollars have been spent addressing the problem.

Only a year ago it was estimated that around 400,000 people, mostly in rural areas, lacked broadband access. But that figure relied on a flawed Federal Communications Commission mapping system that across the nation underestimated coverage gaps.

The Wisconsin Public Service Commission has since gathered its own data, through crowdsourcing and other means, and came up with the higher estimate.

“We can’t wait on the FCC to fix its maps,” said PSC Chairwoman Rebecca Cameron Valcq.

The new figures come as state and federal agencies have already spent hundreds of millions of dollars on expanding broadband in Wisconsin. More than $100 million is coming through 95 projects under the American Rescue Plan Act, and this summer the Public Service Commission is expected to award $100 million in 94 state grants requesting a total of nearly $500 million.

Considering what’s been spent since 2014, and what’s been allocated for new projects, more than $1.4 billion in government funding will have gone toward broadband expansion in the state. Yet in many places it’s still painfully difficult to work from home or even upload a video because internet speeds are so slow and unreliable.

Our reliance on the internet quadrupled during the pandemic, said Barry Orton, professor emeritus of telecommunications at the University of Wisconsin-Madison.

Problem is solvable, but at what price?

With more accurate and detailed data on where broadband is lacking, state officials say the problem is much more solvable.

Previously, it was like throwing darts in a dimly lit tavern, according to Valcq.

“It’s a heck of a lot easier for me to hit the bull’s-eye if you turn the lights on,” she said.

In broadband planning, that’s included public surveys and getting more granular data from service providers previously unwilling to share the information with state and federal agencies.

“Are we always in 100 percent agreement with the service providers? No, but I think by and large they’re doing a good job of holding up their end of the bargain,” Valcq said.

The Public Service Commission says its goal is to make sure that everyone has access to at least 25 Mbps downloads and 3 Mbps uploads, and that most people have much higher speeds, in the next five years.

“I think if we can continue to strategically leverage both the state and federal dollars, we should be able to get this done,” Valcq said.

More:For the U.S. to fully realize the economic and cultural benefits of broadband, it must reach everyone and be built to last

Areas with little or no available service are the first priority, according to the PSC, followed by upgrades in other places.

There are “pockets of need” in all 72 counties of the state, Valcq said, and a mix of technologies including wireless transmitters and fiber-optic cable, will be needed to address them.

How much would it cost to get broadband to everyone in Wisconsin?

“Nobody really knows,” Valcq said. “Everything is really just a very educated guess because of things like the supply chain, labor shortages, all sorts of obstacles.”

The FCC has said nationwide around 14 million people lacked broadband access. However, the firm Broadband Now, which helps consumers find service, estimated it was closer to 42 million. Microsoft Corp., through measuring the speed that people use the internet for software downloads, has put the number at 120 million.

“Nobody has spent the money necessary to get accurate numbers,” Orton said, and the current minimum standard for broadband, of 25 Mbps downloads and 3 Mbps uploads, is outdated anyway.

The FCC maps are largely flawed because if even one home or business in a census block has access to minimum speeds, the agency considers the entire block served. In rural areas some of those blocks, not to be confused with the larger census tracts, cover hundreds of square miles. Many places are shown as having broadband when, in reality, they don’t.

Two years ago, Congress gave the FCC nearly $100 million to improve its mapping system. The agency has said the process is underway but has not disclosed when the task will be completed.

“Few expect the FCC to publish more accurate maps of where broadband is until 2023,” said Christopher Mitchell, director of the Community Broadband Networks Program at the Institute for Local Self Reliance in Minneapolis.

Earlier this month, the FCC suggested raising the minimum broadband speed to 100 Mbps downloads and 20 Mbps uploads for service providers seeking money under a grant program aimed at difficult-to-serve areas. The agency has also considered creating a cybersecurity requirement.

“Networks that are subsidized and built with federal funds must be secure,” said FCC Commissioner Geoffrey Starks. “This is evident in the constant barrage of attacks on American networks from hostile state and nonstate actors.”

Mediocre upgrades for some

Some people have waited years for usable internet service, only to realize that it’s a modest upgrade when it finally arrives.

Patricia Voermans is one of them. She lives on a narrow peninsula that separates Lake Mary and Lake Buteau, in Lincoln County. Homes in the forested area, called Gleason, are popular with summer residents.

Voermans, a former county supervisor, said broadband always seemed just out of reach. Then one day last summer it finally arrived at her doorstep — sort of.

The new service is over copper telephone lines rather than fiber-optic cable that would provide much faster speeds. It’s better than what she had before, which was satellite internet, but not by a wide margin.

“I can stream videos with what I’m getting … but the speeds are not consistently good,” Voermans said.

She’s helped get speed testing in the area so that local officials can make better decisions when working with broadband service providers, but it’s only part of the solution.

Some places only a few miles outside of Chippewa Falls, a city of 15,000 in Chippewa County, have just received broadband from a local telephone company, according to state Sen. Rob Summerfield, a Republican from the area.

He’s proposed giving funding preference to projects pledging speeds of 900 Mbps or higher, a move that would help level the playing field between rural areas and cities for many years to come.

“If we’re going to be spending the public’s money, we should make sure it’s for high-quality service,” Summerfield said.

In the last three years, more than 300,000 people have gotten broadband access as a result of state grants, according to the Public Service Commission.

Yet state and federal funding could be needed for years to come because complete rural broadband coverage, like the electrification of rural America nearly a century ago, can’t be achieved through private investments alone.

“But until everyone is connected, we really can’t say we are connected as we should be … it’s a lot like electricity,” he said.

Partnerships matter to get this done

It would cost billions to address all the broadband coverage gaps in the state, according to Steve Schneider, president and CEO of Bug Tussel, a rural internet service provider based in Green Bay.

Partnerships with local governments are also essential, according to Schneider.

Last year, for instance, Bug Tussel completed a $70 million municipal bond issuance to fund projects in Calumet, Fond du Lac, Jackson, Waushara and Marathon counties. Proceeds from the sale of the bonds will fund the deployment of several hundred miles of fiber cable and more than 50 wireless towers.

That’s the kind of comprehensive planning needed for ubiquitous coverage, according to Schneider, and it will be done in stages starting with 25 Mbps service and ramping up to higher speeds with the adoption of better technologies.

Companies could work together to reach some areas, according to Schneider.

Marathon County, the largest county in the state by land mass, has worked with Bug Tussel and a handful of other service providers to get coverage in thinly populated areas. It’s tough work in places with thick forests, steep hills and rocky terrain that breaks equipment installing fiber cable.

In the past, Marathon County officials allowed the companies to take the lead on where they’d provide service. But that’s changing, said John Robinson, chairman of the county’s broadband task force.

“I think what we’re going to do in the future is look at some of the speed test data,” he said, and use it to target specific areas.

In Sawyer County, in northwest Wisconsin, there are areas where nothing other than inadequate and expensive satellite internet is available.

“For me, it’s barely usable,” said Steve Beining in the Town of Draper.

He’s been frustrated with the county’s attempts to get broadband through state grants. At one point, he considered protesting the applications because he felt there were conflicts of interest with one of the service providers and questions regarding the proposed coverage areas.

But he’s tried to remain optimistic as the next round of state funding is announced this summer. “There’s a part of me that thinks this is going to get this done,” Beining said. “We have a lot of elected officials who say it’s important. Now we’re waiting for them to back up their words with some results.”

« Whirlwind I Shut Down 75 Years Ago

The Impact of A.I. on Search Engine Optimization »