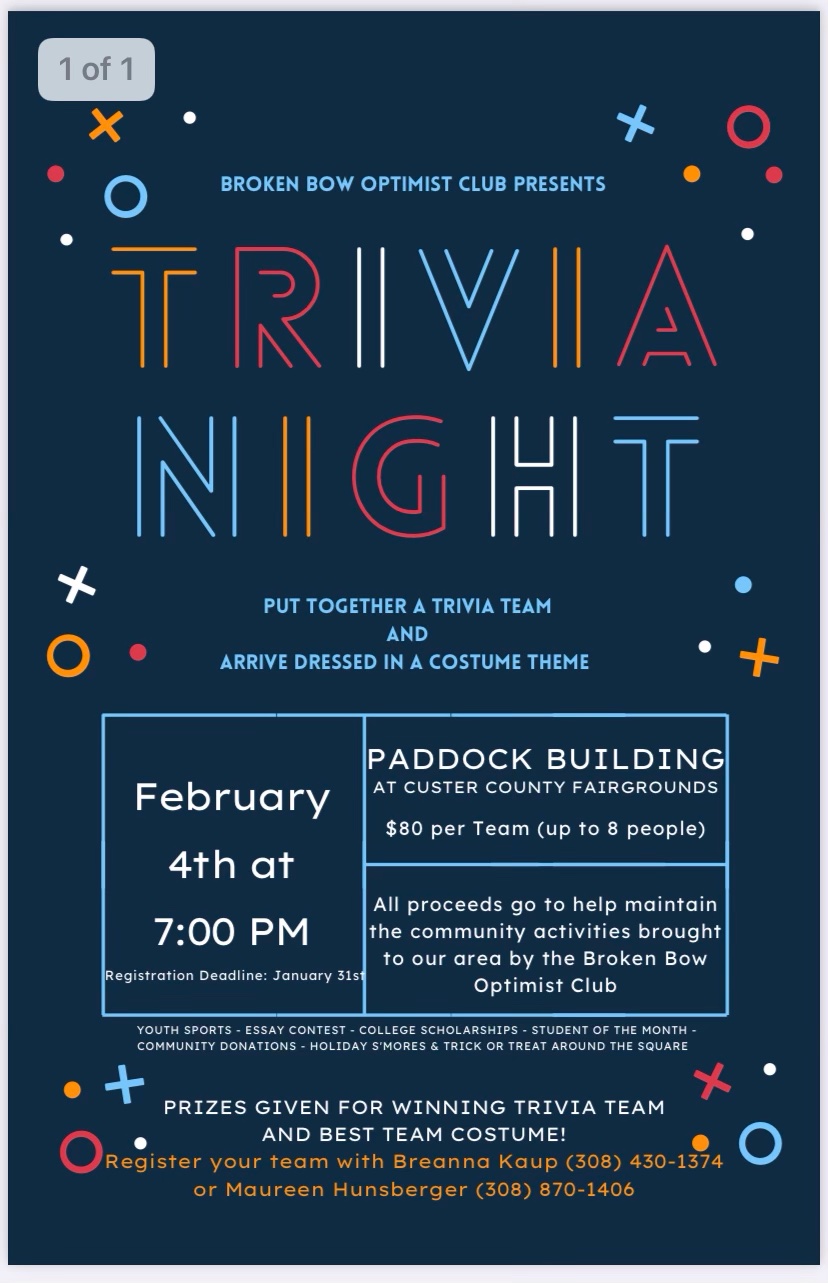 BROKEN BOW—If you have raised young children in the Broken Bow area you are probably familiar with youth soccer and other sports for the youngest members of our community. The dedicated organizers behind the scenes are members of the Broken Bow Optimist Club.

Optimist Club member Breanna Kaup said the club has been talking about wanting to get more people involved by hosting a Trivia Night fundraiser on Friday, February 4. The event will take place at 7 p.m. at the Paddock Building (Building 18) at the Custer County Fairgrounds. The cost is $80 per team of up to eight people.

All proceeds from the trivia night will help maintain the community activities sponsored by the Broken Bow Optimist Club. 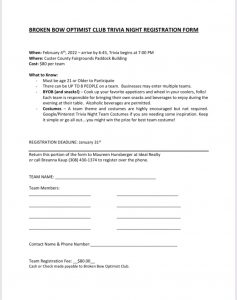 “The Optimist Club is involved with a lot of really great activities around the community. We do youth soccer, youth volleyball, youth football, scholarships, essay contests, a lot of that sort of stuff,” Kaup told KCNI/KBBN.

The club also sponsors Student of the Month recognition, community donations, and brings holiday s’mores and trick or treating to the city square in addition to youth sports.

“First of all we need obviously funds to keep supporting those events in our community but the other thing is a lot of those events are kind of focused on children and we’d like to offer something to the adults too just to get more people involved with Optimist Club and raise some awareness about what we do,” Kaup continued.

Trivia teams are asked to arrive by 6:45 p.m. at the Paddock Building with trivia beginning at 7 p.m. Participants must be age 21 or older, up to eight people on a team, businesses may enter multiple teams. Teams are invited to bring their own appetizers and drinks—alcoholic beverages are permitted. Team costume themes are also encouraged but not required.

“You can have up to eight people on your team. It’s pretty casual. You can bring your own snacks, bring your own beverages. We’re going to have eight rounds of trivia and you can also do a costume theme for your team which is really fun. We’re going to give out prizes for the winning trivia team and the team who is voted best costume,” Kaup said.

The trivia topics and questions are all kept secret until the night of the event. Kaup told KCNI/KBBN she hopes people have fun as they raise money for the Optimist Club programs and said the club also welcomes new members and volunteers.

“Really it’s just to go out and have a fun night out with your friends and our community and just have a good time,” Kaup said.