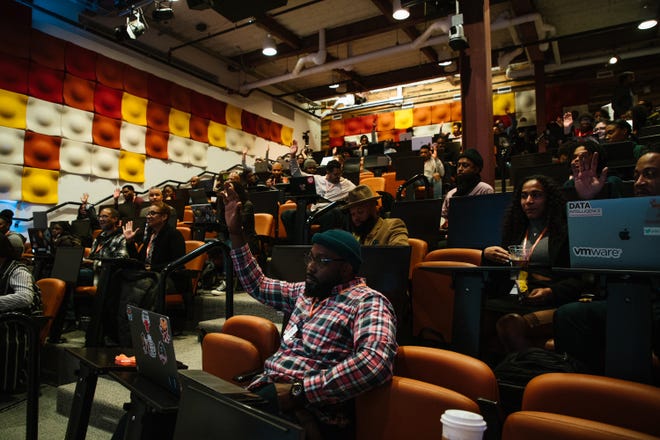 The Hacking with the Homies virtual conference is coming to Detroit Friday and Saturday for the third year in a row, gathering Black coders, programmers, developers, and techies for two days of networking and learning new technical concepts — this year, about NFTs.

The conference is organized by Mack Hendricks and Jeseekia Vaughn, software engineers and computer scientists from Detroit who also co-founded the nonprofit hosting the conference, Detroit Black Tech (DBT).

One of the primary reasons the conference exists is to help “future-proof” the careers of Detroit’s Black tech community. Vaughn said she watched her colleagues advance their skillsets, but wasn’t seeing the same progress among the Black community.

“It felt like there was certain topics … newer, fresher, technical concepts that we felt like everyone wasn’t getting exposed to — especially people in the Black community,” Vaughn said.

This year’s fresh technical concept is non-fungible tokens (NFTs), the interesting — and confusing — topic that advocates claim to make it possible to point to the singular owner of digital files, art, or audio. As NFTs combine the audio and visual worlds with technology, businesses are trying to cash in on the trend.

For $100, or a discounted rate in certain circumstances, attendees can learn the basics of how to use NFTs. Hendrick wants Black programmers to have the confidence to raise their hand in business meetings when their team manager asks who in the room knows how to use NFTs or cryptocurrency.

“Let’s see if we can try and get people up to speed on what it means to have a (crypto) wallet and connect it to your website and kind of showing what they need to do,” Hendricks said.

‘None of this fluff stuff’

The conference caters to hands-on learning. Presenters are only allowed three slides and the rest of their presentation must be code. Attendees get the chance to dive into the details of the concepts by watching or coding along with the presenters.

“None of this fluff stuff” you might find at other conferences, Hendricks said. “That’s really the core thing that differentiates us.”

DBT grew from the gap Hendricks and Vaughn noticed in Detroit’s technology scene. Detroit was becoming a tech hub, but Black developers were not part of it.

So, in 2018, they gathered their network together for a photo shoot at the Charles H. Wright Museum of African American History, which Hendricks admits was a funny first step. But their goal was just to show the tech world that Black people were there, too.

DeWayne Williams has attended Hacking with the Homies for years now. Even though he’s not a software developer per se, he said the speakers and breakout sessions made the topics approachable.

“There was high level, engaging conversation where, if you’re not in the tech field, you can understand the content,” Williams said. “It was something that got people excited about the whole software development field as a whole.”

For Williams, the connection with peers was just as important as learning new topics. Williams said Black techies experience isolation from two forces, often being the only Black person in their company, and being naturally introverted or shy — a stereotype of programmers Williams said he finds to be generally true.

Williams hopes the community can grow to encompass Black students yet to enter tech careers.

“My goal is to make sure that we’re building a pipeline and we’re getting the youth excited about careers in technology,” Williams said. “The youth is already born into technology and they’re doing so many things with technology, but not necessarily thinking about, ‘I can make a career out of this.’ “

Similarly, Vaughn’s focus is on mentorship and accessibility to programming. She was a musician, then engineer, who did not click with computer science while she was a student.

“It was a very painful process, honestly,” Vaughn said. “Even though I passed those classes, I didn’t feel confident in what I had learned or anything like that.”

It was not until she got involved with Grand Circus, a Detroit-based company that runs virtual coding boot camps, that she learned to appreciate computer programming. She started as an intern through Grow Detroit’s Young Talent program, took a Grand Circus coding boot camp, and returned to teach full time at Grand Circus after a number of years working for start-ups.

“My passion is around exposure to tech,” Vaughn said. “I was one of those people where I was well into my adulthood before I knew that I could study engineering or science. I just want people to feel like they that is an option for them.”

Hendricks, who studied computer science for his bachelor’s degree, said more than half of the participants at the 2021 conference were boot campers, like Vaughn. He said many of them see the Hacking with the Homies conference as a chance to broaden their skills beyond what they learned at coding boot camps.

In fact, DBT can trace its origins to mentoring college students when Hendricks and Vaughn met their other co-founders at Wayne State University’s Hacker Nights, a community coding workshop series that ran out of WSU’s Innovation Warrior’s office in the past. The name of the conference, and hands-on presentation style, is a tribute to DBT’s starting place.

This year, Hacking with the Homies is also focusing on making programming and tech accessible to an older audience, as well as a younger one. AARP’s Innovation Labs — an accelerator program seeking to fund start-ups in the age-tech space — is one of the main sponsors.

Detroit is the place to be

Regardless of the focus, Hendricks wants to see his fellow Detroiters launch more start-ups in town, and hopes DBT can serve as a connection point for finding co-founders and employees.

Additionally, he hopes the conference serves as a gateway for Black programmers around the world to become familiar with what is offered in Detroit. Hendricks said several California-based programmers attended their in-person conference in early 2020 and brought new ideas and perspectives.

“This year, we purposely were trying to get people from other places,” Hendricks said. “As people think about the great resignation with people leaving and relocating, they’ll think about Detroit as being a tech hub with a community that they can come to.”

More: How to spot scam surveys

And Vaughn hopes that Detroit can retain its Black programmer and software developer talent.

“There were a lot of people that felt that they had to leave Michigan or leave Detroit in order to find those software roles and that tech startup experience,” Vaughn said. “Now, folks can realize that you don’t have to go to the Bay (area) just have a great software engineering career.”

The Hacking with the Homies conference will be held Feb. 25 and 26, 2022. Find more information at https://www.hackingwiththehomies.org.