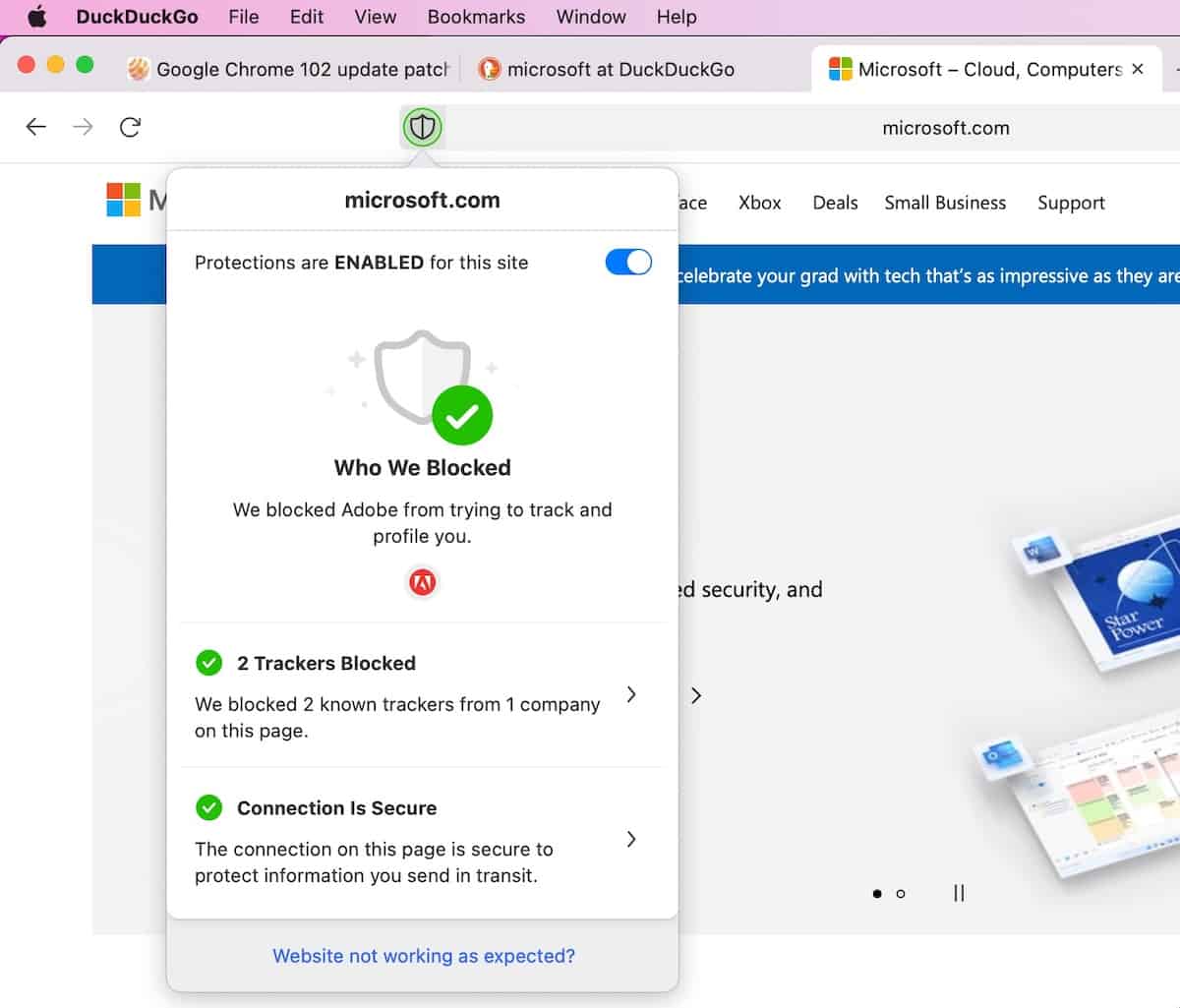 DuckDuckGo Privacy Browser isn’t totally private, a security researcher has revealed. The privacy-focused search engine’s app, for iOS and Android, is not blocking trackers from Microsoft.

The news came to light when security researcher, Zach Edwards, who was conducting a security audit of the browser, found that the app blocked trackers from Google and Facebook. He observed that the app didn’t block Microsoft trackers. Screenshots and messages posted by Edwards on Twitter reveal that the app let the trackers run on Bing and LinkedIn’s domains. This in turn puts the user’s privacy at risk, since the Redmond company can collect information such as the IP address, user agent, and other relevant data.

The app includes, among other things, a tracker blocker and a cookie blocker to protect the privacy of users. The description of DuckDuckGo Privacy Browser on the App Store and Google Play Store reads as follows,

“Escape Website Tracking – Tracker Radar automatically blocks hidden third-party trackers we can find lurking on websites you visit in DuckDuckGo, which stops the companies behind those trackers from collecting and selling your data.”

When an app has a description like that, you would expect it to apply to all websites, wouldn’t you? That’s why the fact that it doesn’t block Microsoft’s trackers is a problem, it should have been upfront about the issue.

Why does DuckDuckGo Privacy Browser allow trackers from Microsoft?

Bing is one of the many sources from where DuckDuckGo pulls the results from. In case you aren’t aware of it, the privacy-focused search engine has an agreement with Microsoft, to display contextual ads in its search results. These ads were generally believed to be non-tracking, as the service does not profile its users.

Gabriel Weinberg, the founder and CEO of DuckDuckGo, responded to Edwards’ findings, confirming that the browser allows Microsoft trackers.

He explained that the search engine ensured the anonymity of users when search results are loaded, and that this includes advertisements that are displayed. But, it appears that the internet company’s agreement with Microsoft prevents DuckDuckGo from blocking its trackers.

Is DuckDuckGo.com safe to use?

Yes, it is. While the browser has been found guilty of allowing said trackers, Weinberg has confirmed the search engine remains untainted. So, there’s a bit of good news amidst this chaos. I would still advise using an ad blocker, like uBlock Origin or AdGuard, to protect yourself from trackers. It is unclear if the macOS browser is affected, but given the nature of the issue, it is likely affected as well.

In a statement sent to Bleeping Computer, Weinberg said that his company is working with Microsoft on removing the restriction to block the trackers. He also defended DuckDuckGo’s browser, stating that it blocks third-party tracking scripts before they load on sites, instead of following other browsers that just offer 3rd-party cookie protection and fingerprint protection. The company will also update its app store descriptions to provide more information.

The timing of the discovery is particularly bad for DuckDuckGo, as it had criticized Google’s privacy practices just a couple of weeks ago. It had proudly announced that its Chrome extension blocked Google’s new tracking methods, such as Topics and FLEDGE.

Practice what you preach, DuckDuckGo.