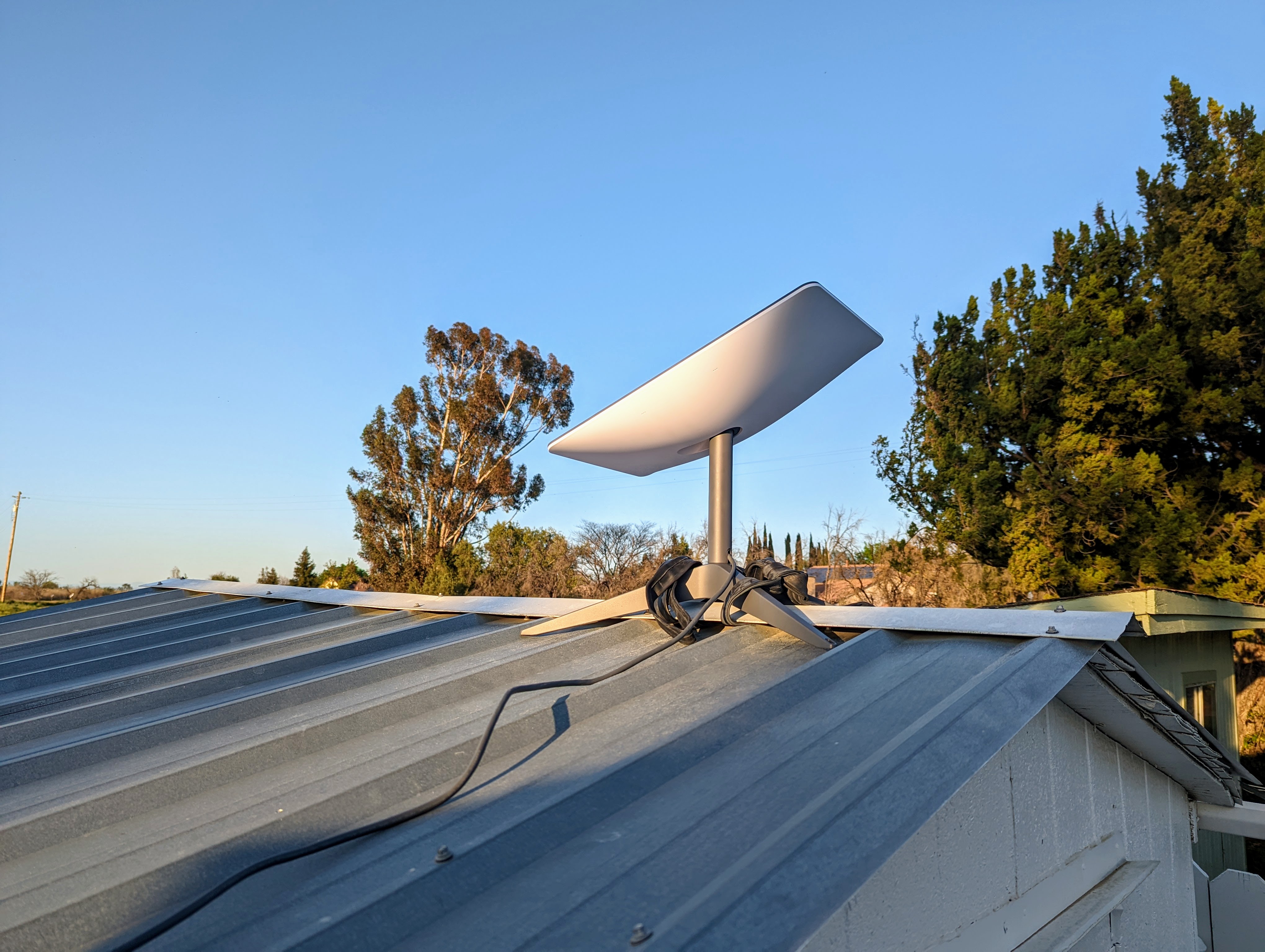 ORLAND, Calif. — Looking north into the night sky during a visit to my hometown last year, I was momentarily stunned by a line of lights moving steadily from west to east, noticeably brighter than the stars.

Were the aliens finally arriving in the almond orchards? Nope, but Elon Musk’s broadband internet service was.

It was a train of SpaceX Starlink satellites in low-Earth-orbit, beaming internet back to the surface of the planet. These satellites, developed at a SpaceX facility in Redmond, Wash., have become an increasingly common sight around the world as the company has deployed thousands of them to fill out its internet constellation.

On a whim, I signed up for the Starlink waiting list that night. Knowing that the wait would be long, I promptly forgot about it until several months later, when our GeekWire accountant asked about an unexplained charge on my corporate card. I had overlooked the Starlink email letting me know my order was ready.

Whoops! I guess I’d better test this thing out.

That is what I’ve been doing this week in my hometown in Northern California. For the record, this is the real Northern California, an agricultural community 100 miles north of Sacramento, not the Bay Area, which is not Northern California. The world does not begin in Los Angeles and end in Los Gatos, despite what people in Silicon Valley might like to believe. Look at a map, people.

Don’t get me started. The point is that it’s exactly the type of place where new forms of satellite internet could bridge the digital divide with the promise of more affordable, accessible and reliable high-speed broadband.

My real-world experience with Starlink suggests that its reliability has improved considerably since some tech reviewers were frustrated last year by the spotty nature of the early Starlink beta.

I was also able to use Starlink in multiple locations, confirming that the (officially unsupported) roaming feature does work in some cases.

The takeaway: Starlink is becoming an increasingly viable alternative to incumbent providers in rural areas — if you don’t mind waiting on the list until 2023, and if you can stomach the cost of the Starlink dish and wireless router, which just went up by $100 to $599, along with an $11 increase in the service fee, to $110/month.

Here’s what I’ve learned and experienced with Starlink in Orland this week.

The setup: The Starlink kit that I received in the mail was the second-generation rectangular dish, released last fall as a successor to the first-generation circular “Dishy McFlatface,” the weirdly cute name that Starlink has given the dish.

With a flat white surface, it’s about 19 inches long by 12 inches wide, and 4 inches deep at the thickest point of the convex back. It weighs about 8 pounds, according to the scale at the house.

It clicks into a four-legged metal stand, about 2 feet by 1 foot, and connects to a wireless internet router via a 75-foot detachable cable. The router plugs into the wall. And that’s the extent of it.

I found it simple and easy to set up a temporary installation (on top of my parents’ backyard shed) using the Starlink app on my Android phone.

You’ll want to put it in a place with maximum exposure to the sky and limited obstructions. The Starlink app has a feature to help determine where to place the dish. A roof is probably your best bet for permanent installations, and you’ll need to find a way to get the cord into the house to connect with the wireless router.

The dish, a phased-array antenna, moves automatically to lock onto the satellites.

Speed and reliability: I consistently saw peak download speeds of more than 100 Megabits per second (Mbps), and upload speeds as fast as 8 Mbps, more than enough for email, web browsing and video calls during the week.

Over several days of usage, there were times when the speed dropped significantly or the connection dropped altogether. But these moments were sporadic, and they happened most frequently after I moved the dish or set it back up after taking it to a new location (see below). It seems to take a little time to find its bearings after any major change.

During a 45-minute video call on Thursday, for example, my colleagues reported that my video pixelated at times on their end, and the podcast recording service that we use indicated that my connection strength was reduced at times. But the connection didn’t drop completely.

This increased reliability reflects the steady expansion of the Starlink service.

“Since launching our public beta service in October 2020, the Starlink team has tripled the number of satellites in orbit, quadrupled the number of ground stations and made continuous improvements to our network,” Starlink said in a message to users announcing the price increases, which it attributed to inflation.

Of course, as locals will tell you, the ultimate test in the Sacramento Valley is the brutal north wind. The weather gods provided the perfect conditions for this test on Monday. I was impressed at the reliability of the service even in 20 MPH winds, no doubt aided in part by the aerodynamic design of the dish.

Roaming: Officially, at least, each Starlink device is tied to its registered address, with no guarantee of service elsewhere. However, the ability to move locations has officially been unlocked by the company as part of a humanitarian deployment in Ukraine, and it seems to be unofficially available in other places.

To be clear, this does not mean usage in-motion, on a moving vehicle. But moving the device from one fixed location to another does seem to be increasingly feasible.

For example, I was able to set the Starlink up and use it at my sister’s house in Chico, about 20 miles east of the designated address for my kit, with speeds and reliability comparable to what I had been seeing in Orland.

Last night, at a friends’ house in a rural area a few miles west of Orland, I set the Starlink on the ground in the driveway, and ran the cord through the front door to the router.

After taking about 15 minutes to find its bearings, it was good to go, just in time for few online games of Call of Duty: Warzone, totally lag free, in contrast with the normal internet experience out there. I felt bad taking the Starlink dish with me when I left.

I even took the Starlink out to Black Butte Lake, 15 miles west of town, where I plugged it into the bathroom near the boat launch at Buckhorn Recreation Area and ran the cord to the dish on the roof of my mom’s minivan nearby.

Out there, the service was much more sporadic, cutting in and out. However, I temporarily saw speeds of more than 90 Mbps. Based on my subsequent realization about the time it takes for the dish to find its bearings, I think it might have become more reliable if I had given it more time (and been less worried about what the US Army Corps of Engineers personnel who run Black Butte would say if they had noticed what I was doing).

If you do move the Starlink dish, you’ll want to use the “stow” feature in the app, which tucks the dish into a secure position for transport.

You’ll also want to be careful when you carry and box it up. Yesterday I noticed a tiny chip in the surface of my Starlink dish, no doubt caused by a careless bump during one of my on-location experiments. It doesn’t seem to have impacted the performance or reliability of the service.

Competitive comparison: Ultimately, the question of whether Starlink is right for any given person or household will depend significantly on price. For a baseline comparison to a major urban area, I pay about $80 a month for gigabit (1000 Mbps) fiber internet service from Lumen (formerly CenturyLink) in Seattle’s Ballard neighborhood.

My parents live in the Orland city limits, and pay $73 a month for Xfinity cable internet service with speeds up to 200 Mbps. Comparable broadband outside of town can run as much as $150 a month, including service from competing satellite providers, with generally lower speeds and varying levels of reliability, plus data limits in some cases.

Even at the new monthly rate of $110, Starlink offers a competitive service price. However, the up-front cost of nearly $600 for the Starlink kit is several times higher than the installation fees for most other services, and requires a do-it-yourself setup unless you can find (and pay) an independent technician to help.

On the plus side, Starlink doesn’t lock you into a long-term contract. In the message this week announcing the price increases, the company said existing users can cancel and return their hardware within the first year of service for a partial refund of $200. Full refunds are available for returns made within 30 days of receiving the Starlink kit.

Amazon is developing its own satellite internet service, Project Kuiper, but the initial satellites aren’t set to launch until later this year, and pricing for the service hasn’t been announced.

Bottom line: As it stands today, Starlink seems to be the best fit for people outside of town, in areas not served by existing providers such as AT&T or Xfinity. If your contract with your existing internet rural internet provider is up next year, and none of the above scares you off, it’s worth considering a spot on the Starlink waiting list.

By the time your turn comes, the Starlink service should be even better.

Just keep an eye on your email to make sure you really want a Dishy McFlatface of your own before getting a surprise on your doorstep and your credit card.