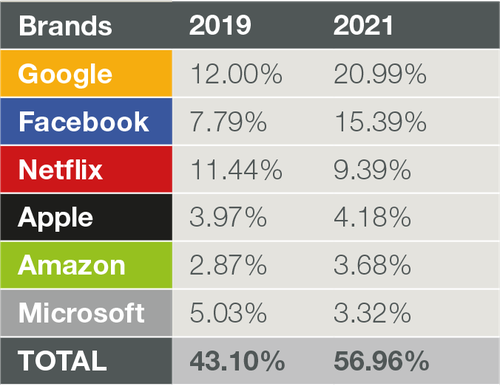 In one small chart, network-monitoring company Sandvine offers a clear view into operators’ changing stance toward Big Tech companies like Amazon and Facebook. The chart shows the percentage of traffic that the six biggest Internet companies generated across global networks.

According to Sandvine, global network traffic from the biggest Internet companies passed the halfway point during the pandemic.
(Source: Sandvine)


Importantly, Sandvine Chief Strategy Officer Samir Marwaha reported in a blog post that, for the first time ever, the six biggest Internet companies in the world accounted for more traffic in 2021 than all other Internet companies combined.


Marwaha described it as a “watershed moment” for service providers. After all, they’re now managing networks that are transmitting far more traffic than ever before  but from a shrinking pool of digital companies.


No wonder some companies in the telecom space are sounding the alarm. As Marwaha pointed out, 13 of Europe’s biggest telecom companies inked an open letter last month calling for regulations that would require big Internet companies to help fund the networks they’re using.


“Large and increasing part of network traffic is generated and monetized by big tech platforms, but it requires continuous, intensive network investment and planning by the telecommunications sector,” wrote the CEOs of companies including Deutsche Telekom, Telefónica and Vodafone Group. “This model  which enables EU citizens to enjoy the fruits of the digital transformation  can only be sustainable if such big tech platforms also contribute fairly to network costs.”


That argument is now echoing across the US as well. A growing number of voices are calling for “Big Tech” to funnel cash into the Universal Service Fund. The FCC instituted the USF in 1997 to help fund the construction of broadband networks in rural and unserved areas of the country, and to help low-income Americans afford telecom services. But the primary sources of funding for the USF are network operators themselves (which often collect that cash via USF fees levied against their customers).


Such increases were clearly the result of COVID-19 lockdown orders that forced working and schooling from home. But Internet providers generally argue that the spikes recorded during 2020 have leveled off into permanently higher levels of traffic. For example, network-monitoring company OpenVault recently reported that average monthly home Internet data consumption in the US rose to an astounding 434.9 GB in the third quarter of 2021, up 13% over the same period in 2020.


And, as Sandvine’s Marwaha explained, the stakes for network operators are only increasing. “The shift to more mission-critical enterprise and industry services will trigger a need for flawless connectivity and optimal performance for manufacturing robotics, remote healthcare, autonomous driving, public safety and other critical services,” he argued.