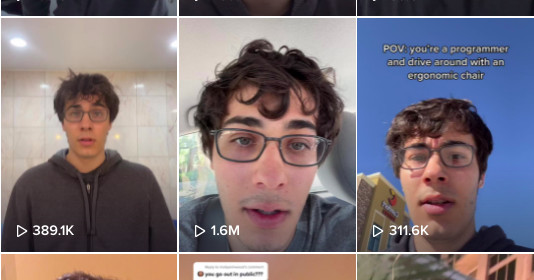 I don’t remember the first time I saw a video of Ben Awad, 24-year-old bespectacled software engineer, on TikTok. All I remember is pulling up the comments and almost choking on my coffee. “I’m leaking all over the floors Ben,” is but one example of the lewd comments left by hundreds of users, whose responses to Ben’s videos range from the goofily longing (“I would literally morph into a keyboard for you ben”) to the absolutely feral (“Ben it’s been 48 hours since my wax. Im allowed friction now ben;” “Ben please just a quick guzzle of your brogurt.”)

What shocked me about these comments was not their content, exactly — wanting to, say, get run over with a truck by a celebrity crush is a longtime pillar of the stan internet — but rather the object of their affection. Awad is certainly cute, in the way the sort of nerdy kid in your math lecture is cute, but he doesn’t preen and pout in front of the camera the way so many others do online, people who clearly know that the crux of their content is “Look at me, I am hot.”

He’s been making popular coding tutorials on YouTube since he was 19 and only seriously started making TikToks last year as part of a stunt to see if he could go viral by hacking into the algorithm (it worked, kinda!). Since then, he’s been explaining programming memes and stitching girls’ videos while making dry, niche coding jokes that act as punchlines.

TikTok did not invent the concept of the thirst trap, but it has democratized it enough that even the most average-looking people, many of them men, are becoming recipients of mass, pulsating, and often quite gross desire. There are many names for these sorts of videos — “Boyfriend POVs,” “ThirstTok,” “Acting POVs,” wherein people do whatever facial expression or hand moment is trendy at the time (currently it’s “smiling while talking”) to a popular audio. It’s a time-honored tradition pioneered before TikTok was TikTok, back when it was Musical.ly, where teens shared videos of dizzying transitions and staccato motions. There, the winners of the algorithm were mostly clean-cut preteen boys and girls who conformed to mid-2010s beauty standards. On TikTok in 2021, it’s much more varied.

Sure, there are the expected genres of hunks baldly catering to the female gaze: There’s one absolutely jacked and tatted-up man who chops wood on camera; there’s a 21-year-old with a mullet who lip-syncs to ’80s hits, much to the delight of his largely Gen X female fans; there are many who cook really, really good-looking food while also being hot. The most famous examples are the ones that end up in cringe compilations and mocking duets — Devin Caherly, who pretends as if, say, he’s your husband seeing you for the first time on your wedding day and falls to tears, has been a longtime target, as have the e-boys whose attempts at coolness so often land as creepy.

March of 2021 was when the thirst comments started coming in on Awad’s page. “I was very much used to mean people on the internet, and it doesn’t bother me,” he says. “But I am not used to these types of comments whatsoever.” They began relatively chaste: “hi im literally in love with u,” “r u free Feb 14?”. Within just a day, though, they leveled up: “im down bad omg,” “hello i’m a CS major who could use your tip”, “my ring finger looking rlly empty rn,” “he literally could do whatever he wants with me.” Now, of course, they are beyond parody (“I’m just a hole ben;” “clawing at the walls and frothing profusely”), and have mostly turned into a competition to see who can write the most shocking observation. He has received so many DMs that he has stopped reading them completely, and says that if he’s in New York City or any situation with a lot of college-aged students, there’s a 50 percent chance he’ll get recognized.

Awad has his theories as to the reason for all this, er, fervor. “I think it’s a couple of things: One is that my content is the opposite of feral, I’m very stoic. I’m not desperate for this type of attention, so it’s a yin and yang.” The dissonance between a video shared to elicit a specific reaction versus the actual reaction it gets is a tentpole of TikTok comedy: “You can think you want to lead people a certain way, but a lot of times, the [commenters] will be like, ‘I noticed that small detail in the corner of your video, and that’s what we’re talking about,’” he explains.

I have a friend, who we’ll call Katie, who is extremely active on alternative-thirst trap TikTok and is also a big fan of Awad’s. She’s conflicted, though, on how she should feel about it. “I hate that my stupid little hormones and stupid little heart do a stupid little flip when I see a hot guy on TikTok,” she says. “I open up the comments to these girls or guys going absolutely feral for this person and all of a sudden it feels silly to throw my comment into the pile. Like, what do I think will happen, they’ll notice me?”

There is also the question of consent, and whether it is ethical to publicly thirst after someone who may or may not be asking for it. “If we saw these kinds of comments from men on a girl’s video, the reaction would be far more negative,” says Katie. “But because now men are receiving just a fraction of the thirst comments we receive for just existing online, does that make it okay? I don’t know.”

Awad hasn’t had anyone cross the line, per se, but he does feel weird about certain types of comments. “The ones that go a little bit too far is when they get possessive or protective, like, ‘Are you talking to another girl?’”

The rules of thirst trap TikTok are different from that of Instagram or Twitter, and they certainly apply differently to people across the gender spectrum. As the popular TikToker Brittany Tomlinson put it to me last year, “There’s this hyperfixation on being a cute little baby. Like, why? I don’t get it. It’s like, ma’am, you have taxes to pay.” These conventions are much more fraught for women, who are encouraged to look as young as possible until it becomes creepy.

Meanwhile, men are touted as heroic heartthrobs for being what some would argue is the privilege of being average-looking and putting little effort into their videos. “There’s a part of me that’s almost angry that it’s so easy for these men to get this kind of attention by literally just posting a video of them sitting at a desk and smiling at the camera,” adds Katie. “If they know they’re hot, I don’t want to fuel their ego further!”

Awad’s commenters, for instance, love to debate whether he’s in on the joke, whether he knows exactly what he’s doing. “I am not unaware of it,” he tells me, adding that he prefers to be coy when responding to the two most popular questions his followers ask: his height and relationship status (to the fans: I tried, but he declined to answer either, my sincerest apologies). Being a TikTok hunk, he says, has made dating both easier and more complicated: While he has a much bigger pool to draw from, it takes a specific kind of person to be okay with the content he makes.

He has yet to experience, however, the kind of world-shattering attention that has haunted accidental hunks of the past: In 2014, when a 16-year-old boy became “Alex from Target” after someone snuck a photo of him while he was working as a cashier, he and his family were subject to defamatory lies, rumors, and death threats, and he’s no longer publicly online. Nor has Awad been offered any modeling roles, unlike Jeremy “Prison Bae” Meeks, whose handsome mugshot went viral the same year.

What Awad and others with similar fanbases on TikTok — @bradleywebber20, @steezynoodles, @thecodyfromtotaldrama, @archiedonohoe — are experiencing are the effects of going viral in a relatively niche corner of the internet; perhaps not as viral as similarly nerdy-cute news anchor Steve Kornacki during the 2020 election, but maybe more attainable than, say, the Planet Money TikTok guy, who sort of looks like Awad but doesn’t acknowledge his league of thirsty fans.

It’s a common subject on TikTok to discuss whether someone is “designed for the female gaze,” or to use common parlance, “girl hot,” which is to say not necessarily the portrait of ultra-aggressive masculinity that many men view as the male beauty standard. TikTok hunks belong in Lisa Simpson’s Non-Threatening Boys magazine, but far more attainable than someone like, say, a Timothée Chalamet or a Harry Styles, and therefore more rewarding to thirst after.

An example: Awad, who currently has more than 650,000 followers, expects he’ll reach a million sometime in January or February. As a gift to his fans, once he hits the mark, he promised to make a video in a maid outfit. Timothée Chalamet could never.

This column was first published in The Goods newsletter. Sign up here so you don’t miss the next one, plus get newsletter exclusives.

F & B Business
We use cookies on our website to give you the most relevant experience by remembering your preferences and repeat visits. By clicking “Accept All”, you consent to the use of ALL the cookies. However, you may visit "Cookie Settings" to provide a controlled consent.
Cookie SettingsAccept All
Manage consent