With help from Rebecca Kern

Editor’s Note: Morning Tech is a free version of POLITICO Pro Technology’s morning newsletter, which is delivered to our subscribers each morning at 6 a.m. The POLITICO Pro platform combines the news you need with tools you can use to take action on the day’s biggest stories. Act on the news with POLITICO Pro.

— MT exclusive: Senate Democrats are questioning Meta CEO Mark Zuckerbeg over allegations that his company’s handling of election misinformation helped lead to the Jan. 6 attack on the Capitol.

— Banding together: A coalition of small- to medium-sized tech companies is asking for a meeting with Commerce Secretary Gina Raimondo to clarify whether she supports new European antitrust rules.

HAPPY WEDNESDAY AND WELCOME TO MORNING TECH! I’m your guest host, Emily Birnbaum. If you hear of any intriguing lobbying activity over the holidays, don’t forget to tell me!

Technical standards like 5G and Wi-Fi have the power to transform industries, fuel the economy, and create high-quality jobs. But that only happens if owners of patents essential to standards honor their commitments to license all innovators to use those patents on fair and reasonable terms. A new draft Administration statement restores the balance vital to standards adoption and job creation. Support the Administration to promote American manufacturing and limit product bans on standard-essential patents.

GSA’S UPGRADE PLANS — Carnahan is shepherding one of President Joe Biden’s most expansive government modernization efforts: fixing up its creaky, fragmented computer systems. She envisions a future in which people can access programs like food stamps and rental assistance as easily as they can order a pair of shoes. “We know that good policy gets sunk regularly if tech doesn’t work,” Carnahan said. Her slogan: “Make the damn websites work.”

MT chatted with Carnahan, a former Missouri secretary of state, about how she plans to implement Biden’s government modernization order, her views on the revolving door between tech companies and the public sector, and whether the major tech companies are too powerful.

— On the Build Back Better Act: Carnahan said she will continue advocating the inclusion of billions of dollars in funding for government IT in any future social spending deal between Sen. Joe Manchin (D-W.Va.) and the White House. The version of Build Back Better that Manchin killed last weekend included $250 million for the GSA’s Technology Modernization Fund and $200 million for the Federal Citizen Services Fund, two programs aimed at helping agencies fund new tech projects. Carnahan said she’ll emphasize to policymakers that people “expect services to be delivered digitally” — especially as the Covid pandemic rages on.

— On GSA’s priorities following the EO: Carnahan said GSA was “very involved” in putting together Biden’s executive order, which directed 17 agencies to modernize the way they deliver services such as health care and Social Security checks. The order specifically directs the GSA to expand USA.gov to become a “digital front door,” where people can access a breadth of federal services rather than going from website to website. “We’re going to be rolling these things out as quickly as we can,” she said, without specifying a timeline.

— On technologists’ role in government: Tech critics have complained that streams of employees at the biggest tech companies have been flooding into public service. But Carnahan, who has moved between the private and public sectors several times herself, said the government needs to learn how to better attract and retain technology experts.

She said government officials too often allow tech companies to tackle difficult technological projects on their behalf, which often leads to “failed projects” that are over-budget and run late. “If you have people who are working for you who know the marketplace and know how to hold folks accountable to deliver what you’ve paid for, you’re going to get better results,” Carnahan said.

— On antitrust and government IT: Carnahan said GSA doesn’t spend “a lot of time” thinking about the antitrust concerns swirling around two of the government’s biggest and most important partners, Google and Amazon. But she said she thinks a lot about “switching costs” — the ability to easily move from one company’s products to another’s.

“There are lots of ways you can get locked into things — sometimes [that’s] by contract and sometimes that’s by technology,” she said.

META PRESSED ON SPREAD OF MISINFORMATION BEFORE JAN. 6 — More than a dozen Democrats – led by Minnesota Sen. Amy Klobuchar – wrote to Zuckerberg on Tuesday to raise concerns over the company’s effort to squelch election-related misinformation leading up to the deadly attack on the U.S. Capitol on Jan. 6.

Facebook whistleblower Frances Haugen disclosed to Congress in October that the company had shut down its Civic Integrity Team, where she was a product manager and worked to prevent the spread of election interference and disinformation. The company also terminated misinformation and disinformation safeguards put in place before the 2020 election. Haugen said these actions contributed to the insurrection.

In the letter, shared exclusively with Rebecca, the lawmakers also criticized Meta for declining to implement a recommendation from its Oversight Board to conduct an internal study of the platform’s role in the insurrection.

— Connection to Jan. 6: The dissolution of the Civic Integrity Team and other safeguards “allowed misinformation, disinformation, and violent rhetoric to return to the platform immediately following Election Day and in the lead-up to the January 6th insurrection,” wrote Klobuchar and other Democratic senators, including Sens. Dick Durbin of Illinois and Mark Warner of Virginia.

— Meta’s response: Nick Clegg, Meta’s vice president of global affairs and communications, has previously called it “ludicrous” to claim that false election rhetoric on the platform contributed to the Jan. 6 insurrection. In comments to POLITICO, Meta spokesperson Andy Stone repeated the company’s contention that it didn’t disband the Civic Integrity Team but rather distributed its work to other areas of the company.

“It is wrong to claim that these steps were the reason for January 6th — the measures we did need remained in place well into February, and some, like not recommending new, civic or political groups, remain in place to this day,” Stone said. Meta has more than 40,000 employees working on safety and security, and expects to spend more than $5 billion on safety this year, he added.

FIRST IN MT: SMALL COMPANIES VS. RAIMONDO: So far, the bulk of the anger towards Raimondo over her skepticism about EU tech regulations has come from civil society groups. But the business community is now mobilizing — particularly the smaller rivals of Google, Meta, Amazon and Apple.

— What the companies want: The eight companies, including Yelp, Genius, Felt, Patreon, Beeper and REX, wrote that they support the Digital Markets Act and the Digital Services Act, the two EU rules Raimondo slammed during a U.S. Chamber of Commerce event. “The EU proposals on market fairness and contestability have the support of numerous US companies which, for too long, have had to seek recourse before European institutions due to the failure of US enforcers and policy makers to address market concentration,” the companies wrote in a letter to Raimondo.

“You are in a position of great power, and your words carry weight both domestically and internationally,” they added. “We hope that, moving forward, you work to advance the interests of all US companies and of US consumers when interacting with our transatlantic partners in your capacity as US Secretary of Commerce.” They are asking for a meeting during the week of Jan.10.

— Confusion is growing about where the Biden administration stands on antitrust as his administration continues to press against the EU’s rules, most of which mirror antitrust proposals in the United States. Critics have argued that opposing the EU rules flies in the face of Biden’s competition executive order, as well as the views of FTC Chair Lina Khan and DOJ antitrust chief Jonathan Kanter.

TECH QUOTE DU JOUR: Biden said his administration is working with Google to ensure that users can search “Covid tests near me” with greater accuracy.

CFPB COMMENTS FLOOD IN: Tuesday was the deadline to file comments with the Consumer Financial Protection Bureau about its inquiry into the tech giants’ role in online payments, and the battle lines are becoming clearer.

Advocacy groups’ filings referred to online payments as an untamed “Wild West,” calling on the CFPB to rein in the tech giants’ entry into the space before it’s too late. Credit unions celebrated the inquiry; the Credit Union National Association lamented the heavy regulations that the financial industry faces while, it said, tech companies get off almost scot-free. And the Electronic Transactions Association, which represents the major tech companies among other members, defended payments systems and warned that the CFPB should be careful with users’ sensitive financial data as it moves forward with the probe. 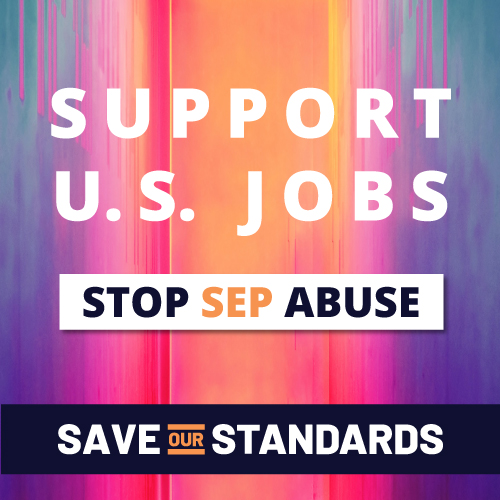 Putting a stop to suicide websites: Lawmakers are urging tech companies to limit the visibility and reduce the risks of a website that instructs users how to commit suicide, The New York Times reports.

New chapter for Xandr: AT&T will sell its digital ad tech platform Xandr to Microsoft, according to The Wall Street Journal.

What’s next for CES: The annual technology show held by the Consumer Technology Association is facing a cascade of cancellations as the Omicron variant of the coronavirus spreads, CNET reports.

A new draft policy statement on standard-essential patents (SEPs) committed for licensing on fair, reasonable, and non-discriminatory terms was released jointly by the U.S. Patent and Trademark Office, the National Institute of Standards and Technology, and the Department of Justice. The draft statement provides guidance on appropriate remedies in cases involving the use of these patents, and presents an approach to SEPs that strives to balance the interests of patent holders with the broad range of U.S. industries that use standards to protect the future of innovation.