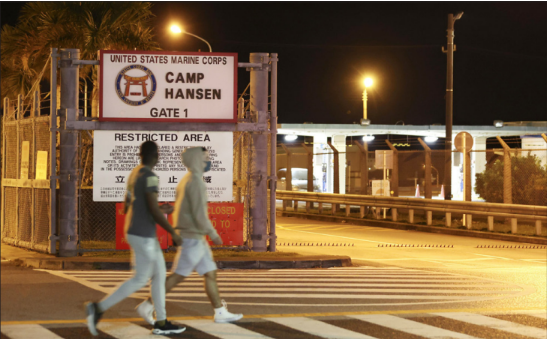 TOKYO — Prime Minister Fumio Kishida is set to place three Japanese prefectures under a quasi-state of emergency on Friday after surges in COVID-19 cases that local governors say are attributable to the spread of the Omicron strain at U.S. military bases.

The quasi-emergency declarations for Okinawa, Yamaguchi and Hiroshima are expected to be effective from Sunday to Jan. 31, allowing local governments to bolster anti-coronavirus measures and request dining establishments to shorten their business hours as health experts warn of a sixth wave in Japan of the COVID-19 pandemic.

The central government will first consult with experts and explain to parliament the necessity of taking the tougher measures requested by the three prefectures. After the process, Kishida is expected to make a formal decision later in the day.

If declared, it will be the first quasi-state of emergency under Kishida, who became prime minister in October when COVID-19 curbs had been entirely ended across the country.

Japan had seen a clear downtrend in newly confirmed coronavirus cases as vaccinations progressed. But the daily count topped 4,000 on Thursday for the first time since Sept. 18, with community spread of Omicron found in areas including Tokyo and Osaka.

The governors of Okinawa, Yamaguchi and Hiroshima believe sharp increases in COVID-19 cases in their prefectures are connected to the spread of Omicron at U.S. military bases.

Okinawa Gov. Denny Tamaki said there is “no doubt” that the bases are one of the major factors, while Yamaguchi Gov. Tsugumasa Muraoka cited results of genomic analyses of virus samples taken from U.S. base workers and residents.

Okinawa is home to the bulk of U.S. military forces in Japan and a cluster of infections has been confirmed at the U.S. Marine Corps’ Camp Hansen in the southern island prefecture. Yamaguchi in western Japan hosts the U.S. Marine Corps Air Station Iwakuni, hit by rising COVID-19 cases that apparently have also affected neighboring Hiroshima.

Kishida has stressed the need for the U.S. to take stricter anti-virus measures at U.S. military bases in Japan but remains cautious about making the same assessment as the governors.

“It’s difficult at this point to identify the cause and routes of spreading infections” in the prefectures, he told reporters on Thursday.

The stakes are high for Kishida, who saw his predecessor Yoshihide Suga step down after public dissatisfaction grew over what was perceived as the government’s poor handling of the pandemic.

The rapid pace of increase in infections has made health experts worry that hospitals will be overwhelmed if the trend continues.

Kishida has vowed to take all necessary steps to pre-empt a surge in coronavirus cases, banning the entry of non-resident foreign nationals in Japan and accelerating the rollout of vaccine booster shots.

While a full-blown state of emergency is declared over a whole prefecture, a quasi-emergency can be more limited in terms of coverage and restrictions.

Local governors can ask, and then order, business operators such as restaurateurs to close early and to stop serving alcohol. Defying such orders without legitimate reasons may result in a fine of up to 200,000 yen ($1,700).

The whole of Okinawa, which reported a record 981 COVID-19 cases on Thursday, will come under the quasi-emergency declaration. In Yamaguchi and Hiroshima, however, only certain cities and towns will be subject to the declaration.

The daily COVID-19 count in Tokyo has also been rising sharply in recent days, and Gov. Yuriko Koike said the battle against the coronavirus has entered “a new phase.”