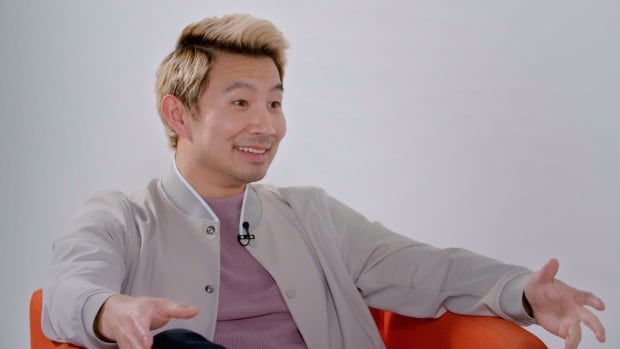 Click the play button above to listen to Tom Power’s full conversation with Simu Liu.

Simu Liu is set to host the 2022 Juno Awards from Budweiser Stage in Toronto on Sunday, May 15, which will be broadcast live on CBC at 8 p.m. ET.

The Shang-Chi and the Legend of the Ten Rings star follows in the footsteps of past hosts like Drake, Sarah McLachlan and Alanis Morissette for the biggest night in Canadian music.

There are several awards to give out, including single of the year. The nominated songs are Brett Kissel’s Make a Life, Not a Living, Charlotte Cardin’s Meaningless, Jessia’s I’m not Pretty, Justin Bieber and Daniel Caesar’s Peaches feat. Giveon, and The Weeknd’s Take My Breath.

Arcade Fire, Avril Lavigne, Mustafa and this year’s Canadian Music Hall of Fame inductee Deborah Cox are among the artists scheduled to perform.

The 2022 Juno Awards host is in the midst of a life-changing year. Already known to Canadian audiences as Jung on the CBC sitcom Kim’s Convenience, Liu became a household name worldwide when he starred in the Marvel’s Shang-Chi, which debuted last September.

The movie broke the Labour Day box-office record — a particularly impressive feat during a pandemic — and went on to gross over $400 million worldwide.

With a sequel already announced, Liu said he’s excited to “do it better.”

“When I think back to my experience shooting the first one, I think I just spent so much of it, like, in a constant state of terror of myself, of the movie not doing well,” said Liu in an interview with Tom Power on CBC’s Q.

“It was just a very anxiety-ridden process that was one of the most fulfilling experiences of my life. But the chance to kind of go back and revisit and to take on that character one more time is very exciting for me because I feel like I’ve settled in a little bit. I’m not trying to prove myself. It’s not like I have the added pressure of, like, introducing myself to the world.”

As incredible as Liu’s fight scenes in the film were, he also had some very memorable moments with Awkwafina in a karaoke room.

“I always fancied myself [a singer],” Liu said with a laugh.

He performs Hot Soup on the film soundtrack, a low-key pop ballad about loss. The song hit home for Liu, who lost his grandparents during re-shoots of Shang-Chi. His parents waited for him to return home to break the news.

Liu spent his early childhood with his grandparents in China. His parents moved to Canada to set down roots before bringing him over.

“[My grandparents] were that sense of safety and security for me,” said Liu, adding that their passing was “a huge shock.”

“I just felt that piece of my childhood go with them. The song, more than anything, is a way to remember that.”

The Shang-Chi soundtrack isn’t Liu’s first foray into music. When he was around 12 or 13 years old, he convinced three of his friends to form a boy band called LX4 (they all had last names that started with the letter L). Liu was hoping to impress his crush at the time, who was into NSYNC.

The boys recorded a song called For You, written by a friend who played the piano, which made it onto the school’s annual student-made album.

Liu admits that he was the most hardcore band member. He recalls an old email in which he passionately tries to convince the others to hire their music teacher as their manager “to take it big.”

“I feel like it was, like, my pressure that I was putting onto the group that really … tore us apart in the end,” said Liu.

Liu did take show business seriously and ended up on one of the world’s biggest stages last November: Saturday Night Live in New York City.

Over the famously hectic week, Liu talked about being Canadian with Lorne Michaels (“He went to the same high school as Drake”), met Pete Davidson on Saturday (“I was like, ‘Where you been?’ He’s like, ‘I’ve been in Palm Springs'”) and attempted an Emperor Palpatine impression over Zoom (“Once more, the Sith will rule the galaxy —” “OK, no, that’s enough”).

Liu also shot a viral skit with cast member Bowen Yang, in which they try to out-do each other for being “The First Asian to…”. The scene pokes fun at all the headlines Yang and Liu have been in as they trailblaze their way through the entertainment industry in North America, where Asian actors are historically underrepresented onscreen.

“I’ve been part of these … big, kind of, flagship, diverse projects since, you know, Kim’s Convenience in 2016. It is an honour. Absolutely,” said Liu.

“I’ve been asked, something like four million times by now, just what the weight of that is. And of course … you are showing people — and not only not only people who look like me, but people who look like you, [Tom] — that we belong and that we exist and that, you know, we have stories that might not be exactly the same as yours, but are part of the fabric that make up our world and our society.”

Liu said that being on Saturday Night Live made him realize how much he loves being on stage and entertaining people. He said he’s looking forward to the Juno Awards and hinted at a possible celebrity cameo.

“I’m definitely going to take what I learned and try to apply it to the Junos and try to make it as fun of an experience as I can for everyone watching,” he said.

Liu takes the stage at the Juno Awards at 8 p.m. ET on Sunday, May 15. Find out all the ways to watch and listen at this link.

This interview was produced by Vanessa Nigro. The article was written by Jane van Koeverden.