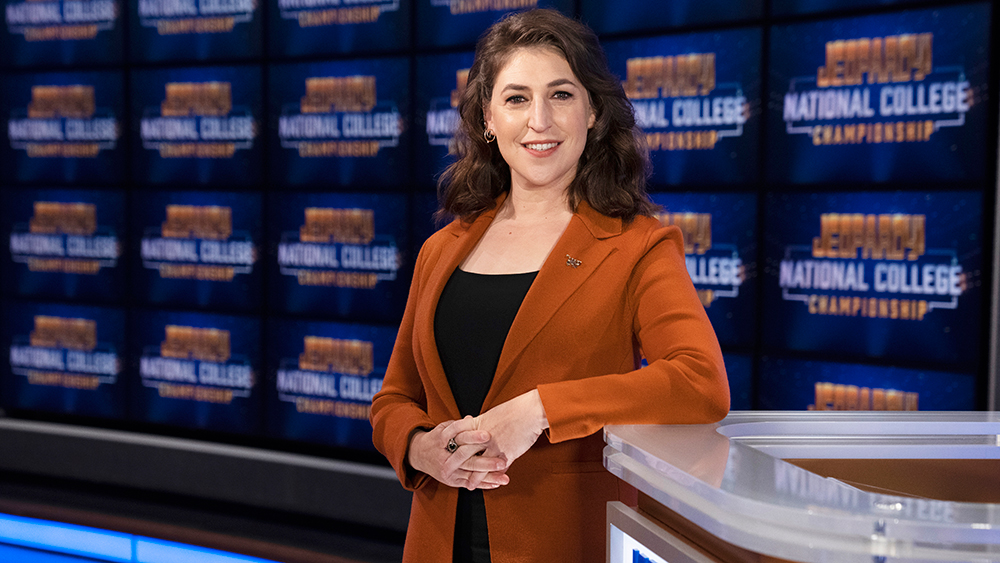 Who will be the next host of “Jeopardy”?

For regular viewers of the long-running quiz show, buzzing in to guess Mayim Bialik or Ken Jennings — who have been alternating as emcee following Alex Trebek’s death — would seem like the correct response.

But in reality, it’s still unclear who will lead “Jeopardy” beyond this year.

After the turn to find Trebek’s successor became messy, Bialik and Jennings were hired as interim hosts throughout the remainder of Season 39, which is currently airing. After that, there’s no word yet on whether a new hosting contender might be considered, or if a choice will be made between Jennings and Bialik. Another option: Sony Pictures Television, the show’s producer, could decide to stick with the status quo and allow the duo continue splitting duties. Sony Pictures Television declined to comment.

In the meantime, Bialik says she’s doing her best to appease the very loyal “Jeopardy” fandom. “I really try to be a neutral presence as much as possible,” she says.

With several games — including the recent Professors Tournament — under her belt, Bialik has begun to find her bearings as a face of “Jeopardy.” But the former “Big Bang Theory” star jokes that learning the tricks of the trade hasn’t come without hiccups.

“I have two red buttons, but they removed one,” Bialik said with a laugh. Unlike the contestants, who use clickers as a means to lock in answers, her signaling device is intended to alert “Jeopardy” producers if she’s confused about a clue or stumbles over words. “I accidentally hit the wrong one, so they took it away. They left my other emergency button in place. So I have a defunct emergency button.”

Starting on Feb. 8, Bialik will host the two-week “Jeopardy! National College Championship,” which features students from 36 schools across the country and offers a first-place prize of $250,000. In advance of the competition, she spoke to Variety about learning to speak “Jeopardese,” balancing moderator responsibilities with Jennings, and the hosting advice she’s opted to ignore.

What has it been like to balance hosting duties with Ken Jennings?

I’m very grateful because I work on [the sitcom] “Call Me Kat” three weeks out of the month. On the week that I don’t, I get to do “Jeopardy.” When “Call Me Kat’s” season ends in March, I get to be more full time on “Jeopardy.” Ken is so beloved, so incredible. He’s a whole other level in the “Jeopardy” universe. When I first met him, I was so excited. Also, he’s tall. I never thought he was as tall as he is.

How would you describe your hosting style compared to Ken’s?

Every host, as we learn from the guest-hosting situation, does bring a bit of their own personality. I stopped reading comments because some people were like, “She acts like she knows everything” and other people were like “It’s clear she knows nothing.” I’m like, well, it’s one or the other or somewhere in between. In terms of that, I try not to pay attention because people have such strong opinions about “Jeopardy.” I’m female, and as much as men and women can and should do the same things, women are perceived differently. I really try to be a neutral presence as much as possible so that it is not an issue. I get to be myself. I make a lot of stupid jokes. Ken and I both want to highlight our contestants, make them feel comfortable, make them feel good. The way he says things, I’m assuming he probably knows all those things. For me, I get to read them like, “Wow, this is amazing.”

As host, what has been the steepest learning curve?

Speaking Jeopardese, as we call it, is an acquired skill. Not saying the same thing every time something is right, having each commercial break sound a little bit different, those are all challenges. I think the steepest learning curve is also [having] someone in your ear. You are processing a lot of information in real time. When things go wrong, it’s hard because wrong can mean they have to reset the whole board. Wrong can be very time consuming. There’s a lot of pressure. It is a high pressure job that I do in heels.

What has been the most helpful advice?

Coco [Corina Nusu] and John [Barra], who are contestant liaisons, helped me a tremendous amount. They help me frame conversations with the contestants and help maintain morale. I’m very hard on myself, and if I mess something up or if we have to redo something, I feel badly for the flow. But what Coco tells the contestants is “If you make a mistake, shake it off.” So that’s what I keep reminding myself.

Have you gotten any less-than-helpful input?

Yeah. “Be yourself” is hard advice for anyone these days. It’s really, like, be yourself. But don’t do too much of this. Don’t do much of that. Don’t stand like that. Make sure you stand up straight. Don’t be too sexy. Don’t be not sexy. In general, it’s the kind of thing I’ve needed a lot of practice, and the only way to get practice is to actually do the shows. So I hope that I’m getting more natural, more smooth, less stupid jokes — but I can’t guarantee that.

What aspect of the “Jeopardy! National College Championship” is most exciting to you?

I think having young folks — kids, as I call them, because my kids are about their age — brings a different energy to “Jeopardy.” That’s definitely fun for us. “Jeopardy” is always fun, but there’s something to 36 college students bopping around on their phones and being their adorable, generational selves. The categories are a little peppier, a little spicier. But it’s also a really beautiful representation of this country — kids from all backgrounds and different shapes, sizes, colors, sexual orientations from colleges that are Ivy Leagues, public colleges, historically black colleges.

People have pointed out that for a facts-heavy quiz show, the information on “Jeopardy” is presented in a way that’s difficult to retain. Do you feel like you’re learning anything new?

Well, I still don’t really know where Lake Titicaca is. There are definitely some things that that stick with me, and after they air, I’ll say to my kids, this happened. But mostly, I can’t really talk about it with anybody. I definitely retain stuff. A lot of the information is things I didn’t know in the first place, like French artists of the 14th century. It’s not a thing that I ever thought I would know about.

What would surprise audiences about the way clues are brainstormed or written?

Everything written in the “Jeopardy” font, even on pieces of paper for brainstorming. When they present a new thing, it’s always in that font.

Why has “Jeopardy” endured for so long?

It is a very simple show that is celebrating the best of our intellectual capacity as humans, and that is timeless. Mastering things and holding information are skills that we, as animals, need. “Jeopardy” tapped into that and found a way to encapsulate the highest level of our intellectual capacity in a way that is entertaining and will likely never go out of style. I mean, I’m out of a job no matter what.