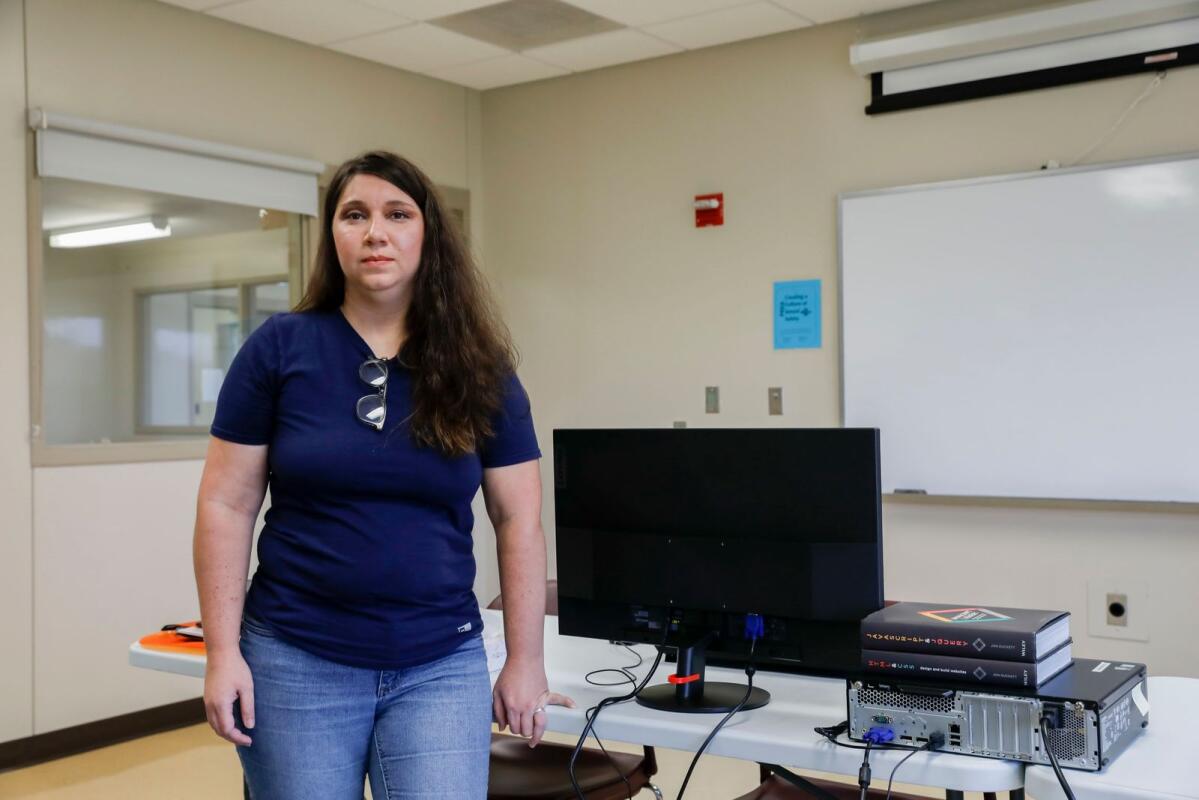 Anna Sothman, an inmate photographed Wednesday at the Iowa Correctional Facility for Women in Mitchellville, has completed two courses in coding and also acts as a teaching assistant for the program. (Rebecca F. Miller/The Gazette)

Anna Sothman, who has completed two courses in coding, is photographed Wednesday at the Iowa Correctional Facility for Women in Mitchellville. (Rebecca F. Miller/The Gazette)

Anna Sothman shows one of her wireframe designs for a mock website Wednesday at the Iowa Correctional Facility for Women in Mitchellville. (Rebecca F. Miller/The Gazette)

MITCHELLVILLE — Anna Sothman encourages her friends to stick with learning computer coding even when it’s hard — “JavaScript is still kicking my butt,” she tells them — and even if they can’t immediately see how they’ll use it.

For incarcerated women learning the skill, knowing computer programming can lead to an in-demand job and break the cycle of returning to prison.

“So many women I see come back over and over and over again. I’s because when they got out there, things are hard,” said Sothman, 33, who has served about five years at the Iowa Correctional Institution for Women at Mitchellville.

“They fell back on what they knew and they end up back here as a result. If this is a way for them to have something to fall back on that isn’t drugs or men related, then I want as many girls to get this opportunity to not come back.”

Last year, the Iowa Department of Corrections and NewBoCo, in Cedar Rapids, started a coding program for women at the prison. The pilot project, funded by a $175,000 grant from the Google Impact Challenge, is modeled after NewBoCo’s Delta V program, a 20-week boot camp where individuals with no technical background become Full Stack JavaScript developers.

Aaron Horn, NewBoCo executive director, said the organization wanted to work with the Correction Department at Mitchellville in part because it’s easier to get permission for on-site instruction at the medium/minimum security women’s prison than it is at some of the men’s facilities. But then the COVID-19 pandemic hit, and classes taught so far have been virtual.

Bit there’s also a shortage of women in computer programming. Women make up just 20 percent of computer science professionals, according to Code.org, a group dedicated to expanding access to computer science among women and other underrepresented groups.

There’s been a push for STEM — science, technology, engineering and math — curriculum in K-12 schools, and classes and camps to teach girls to code have popped up across Iowa and the nation.

Launching the prison project hasn’t been easy. The biggest challenge has been providing students at Mitchellville with enough computer access to do the coding exercises without giving them full internet access, which isn’t allowed for security reasons. With only virtual instruction, it’s hard to teach the upper-level Delta V classes, Horn said.

“The other idea, that is actually starting to take shape, is once they are released, they could come and finish up at Delta V,” Horn said. “We have one student getting ready to enroll in Delta V. She wants to go through the full program.”

The Corrections Department coding program isn’t accredited as an apprenticeship with the U.S. Department of Labor, but graduates do get a completion certificate they can take into their job hunt.

“These jobs are in such high demand that more and more employers are dropping their four-year degree requirement,” Horn said. Criminal records “aren’t the deal breakers they used to be. They (employers) are much more willing to give people a second chance.”

Sothman had never heard of Delta V, but she saw the application mentioned web design and she decided to try it. The first class was an intensive, “fire hydrant” of a day learning coding basics, she said.

“I went back to my room and called my dad and said ‘I love this,’” she said. Her father, also a programmer, said he knew she would because coding combines logic and creativity.

Sothman sees huge potential for female programmers to develop web interfaces for women-owned businesses. She has a notebook full of wireframe drawings of mock websites and loves experimenting with different colors she can create with her code.

“Even when I’m paroled and once I’m home, I still want to continue down this avenue,” said Sothman, who does not know when she will be released. “You can work from just about anywhere. It’s a great creative outlet for me to take.”