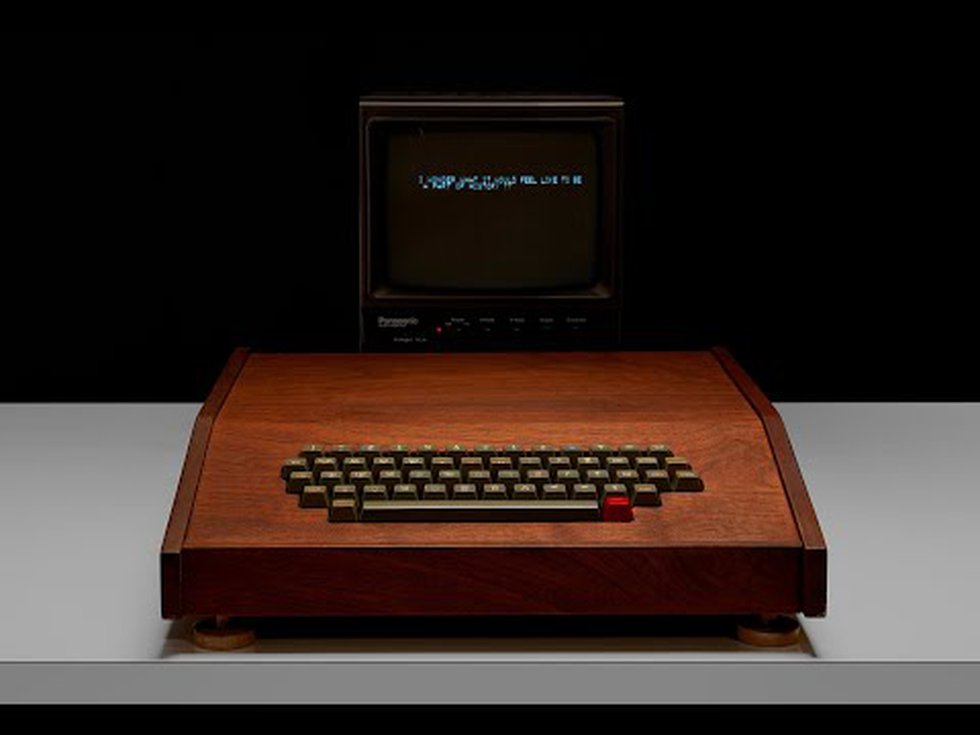 MONROVIA, Calif., Oct. 18, 2021 /PRNewswire/ — The year 2021 marks the 45th birthday for Apple. The world’s largest technology company is currently valued in the trillion-dollar range, and it all began with two Steve’s, one garage, and Apple Computer 1, more commonly referred to as Apple-1. The company was created in 1976 when electronic engineer Steve Wozniak (b. 1950) teamed up with marketing guru and industrial designer Steve Jobs (1955-2011). John Moran Auctioneers is thrilled to give tech lovers the opportunity to own The Chaffey College Apple-1 estimated at $400,000-600,000. This fascinating piece of technological history is in mint condition, featuring many period-correct and original parts (motherboard, monitor, keyboard, 2 cassette tapes, 3 wires, and a period xerox-copy of the original owner’s manual) and it is in working order!

Moran’s flew in the foremost expert the field to conduct an extensive authentication, restoration, inspection, and generate a full condition report for The Chaffey College Apple-1 so that buyers can bid with confidence on November 9, 2021, during the Post-war & Contemporary Art + Design Sale. Join us one week before the sale during preview or contact us directly for a private viewing. Bidding is now available online via Moran’s new mobile app, Moran Mobile, available on both iOS and Android operating systems. Live bidding on a desktop is available through our website; bidding is also supported by telephone or absentee.

The first version of the company’s personal computer built by Steve Wozniak was essentially a motherboard and a manual with instructions on which components needed to be purchased in order to assemble and use the machine. Wozniak contemplated making instructions available on how to build the computer he designed from start to finish for free to anyone who had the patience to create one on their own. Steve Jobs convinced him to instead combine the motherboard and its connections into a magazine box and sell them as a kit. 200 Apple-1 computers were hand-built by Wozniak, Jobs, and a skeleton crew in the garage that belonged to Jobs’ parents. 175 of them were sold for $666.66, a figure that catered to Wozniak’s love of repeating numbers. 50 of the 175 computers were sold to Paul Terrell, owner of Byte Shop in Mountain View, California.

When Jobs delivered the 50 Magazine boxes each containing an Apple-1 kit, Paul Terrell was not happy. He anticipated 50 all-in-one units that could simply be plugged in by the consumer, an unheard-of concept at the time.  Jobs defended his delivery by pointing out that each box included all necessary elements to compose the machine and further convinced Terrell that Byte Shop could make a profit by selling keyboards, monitors, and power supplies within their store as an opportunity to upsell the product.

The wooden case that houses this computer is made from Koa wood and is in very good condition. In the 1970s Koa wood (native to Hawaii) was abundant on the west coast, but due to cattle grazing and extensive logging, the Koa tree is rare and more expensive. There are only six known examples of the Koa wooden case in existence, and this unit is one of them.

The Chaffey College Apple-1 on offer has only had two owners. It was originally purchased by an electronics professor who then sold it to his student:

“I purchased this used from the original owner in 1977.  He was a teacher at Chaffey College, and I was taking his programming course.  He was excited to buy the Apple-II and sold me this for about $650.  Of course, nobody knew it would become a collector’s item…” 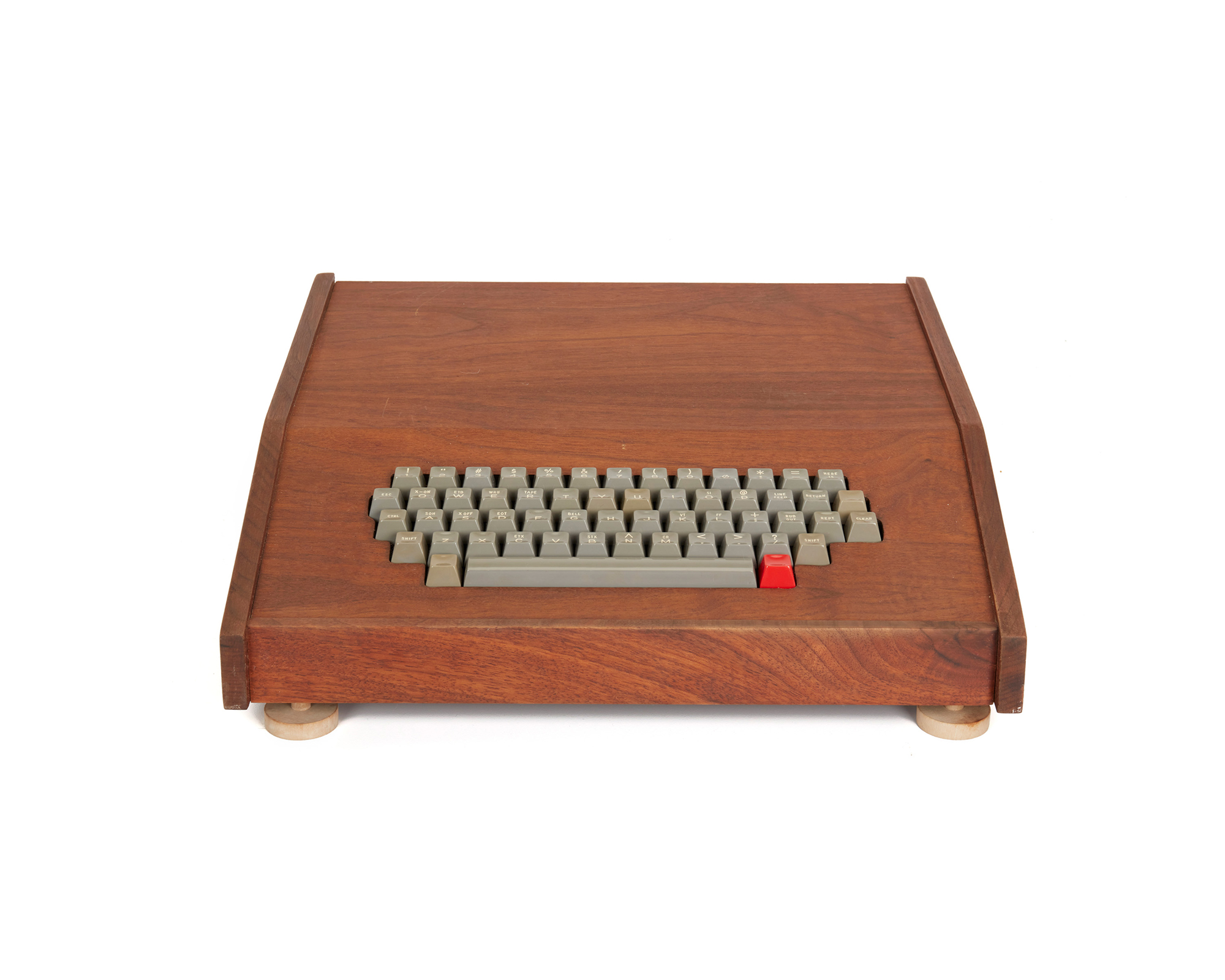 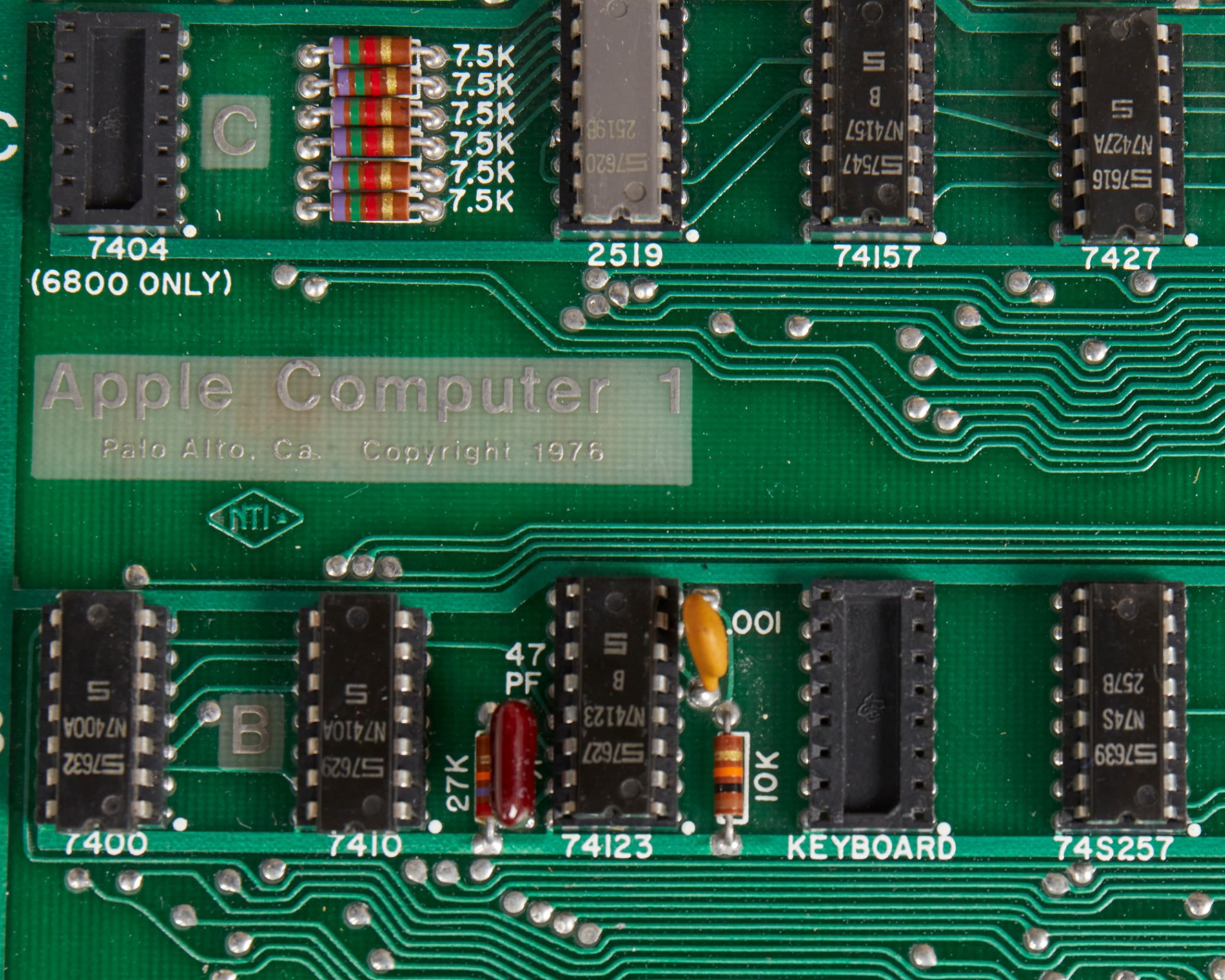