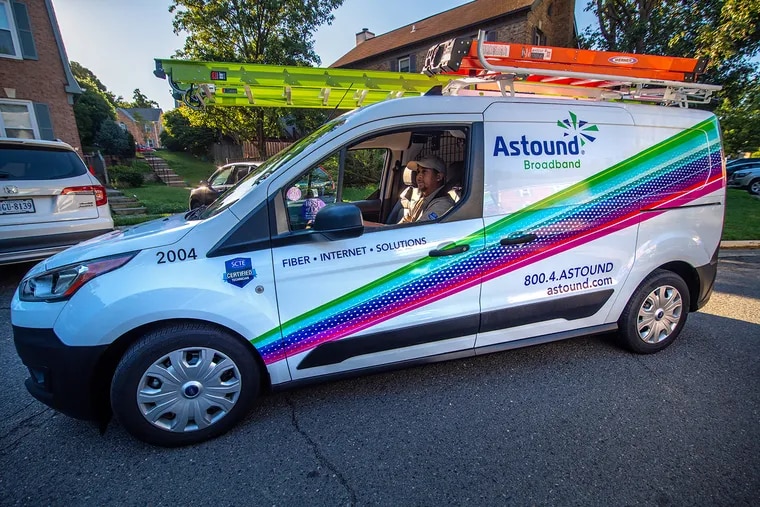 If you’re an RCN cable customer, you’ll soon see a new name on your monthly bill.

The Princeton-based TV and internet provider, which serves customers in parts of the Philadelphia and Lehigh Valley regions, is rebranding itself as Astound Broadband. The new name will put RCN and its sister regional services under one national brand after several acquisitions in recent years. RCN’s parent company has already been using the Astound name.

The company started updating its cable vans, uniforms, signs, and other materials with the new name earlier this month. To limit customer confusion, Astound will temporarily retain RCN and other sub-brands for about a year, said Sanford Ames Jr., general manager of RCN’s Pennsylvania division. For example, customers will see “Astound Broadband powered by RCN” on company materials.

“It ties in to how proud we are of the service that we deliver to our customers,” Ames said of the new brand. “We thought that the Astound name was a reflection of our aspiration of how we want our customers to consider us.”

» READ MORE: Is your cable bill going up? Here’s how to save on TV and internet.

After the deal was announced in November 2020, the cable company acquired regional cable providers Harris Broadband in Central Texas and WideOpenWest, which serves customers in Illinois, Indiana, and Maryland. And it bought EnTouch, a Houston-based cable operator, in September 2020, before the Stonepeak deal was unveiled.

Harris and WideOpenWest will be rebranded later this year, company officials said. In addition to RCN (which stood for Residential Communications Network), sister companies Grande, Wave, EnTouch and Digital West have started to transition to the Astound brand.

Together, the providers make Astound the sixth-largest U.S. internet, TV and phone operator by customers. The company declined to share current revenue and customer figures. As of August, the company said it served more than one million customers across eight of the top 10 largest metropolitan areas including Chicago, Northern California, Washington, Massachusetts, and New York City. Astound has about 3,500 employees, a company spokesperson said. There are about 500 in Pennsylvania, Ames said.

By comparison, Philadelphia-based Comcast reported 34 million customers as of September.

Landing on “Astound” was a process two years in the making, Ames said. Company officials considered about 1,000 possible names and used customer focus groups in coming to their decision, he said.

Companies often rebrand as a marketing strategy following acquisitions, said Sheri Lambert, a Temple University marketing professor. In addition to putting new entities under one umbrella brand, it enables firms to “share with the marketplace their new goals, their products or their offerings,” she said.

“It can also give them a voice to share their values as a company,” Lambert said. “And at the end of the day, that’s going to be important because they need to be able to stand apart from the big boys like Comcast and so forth.”