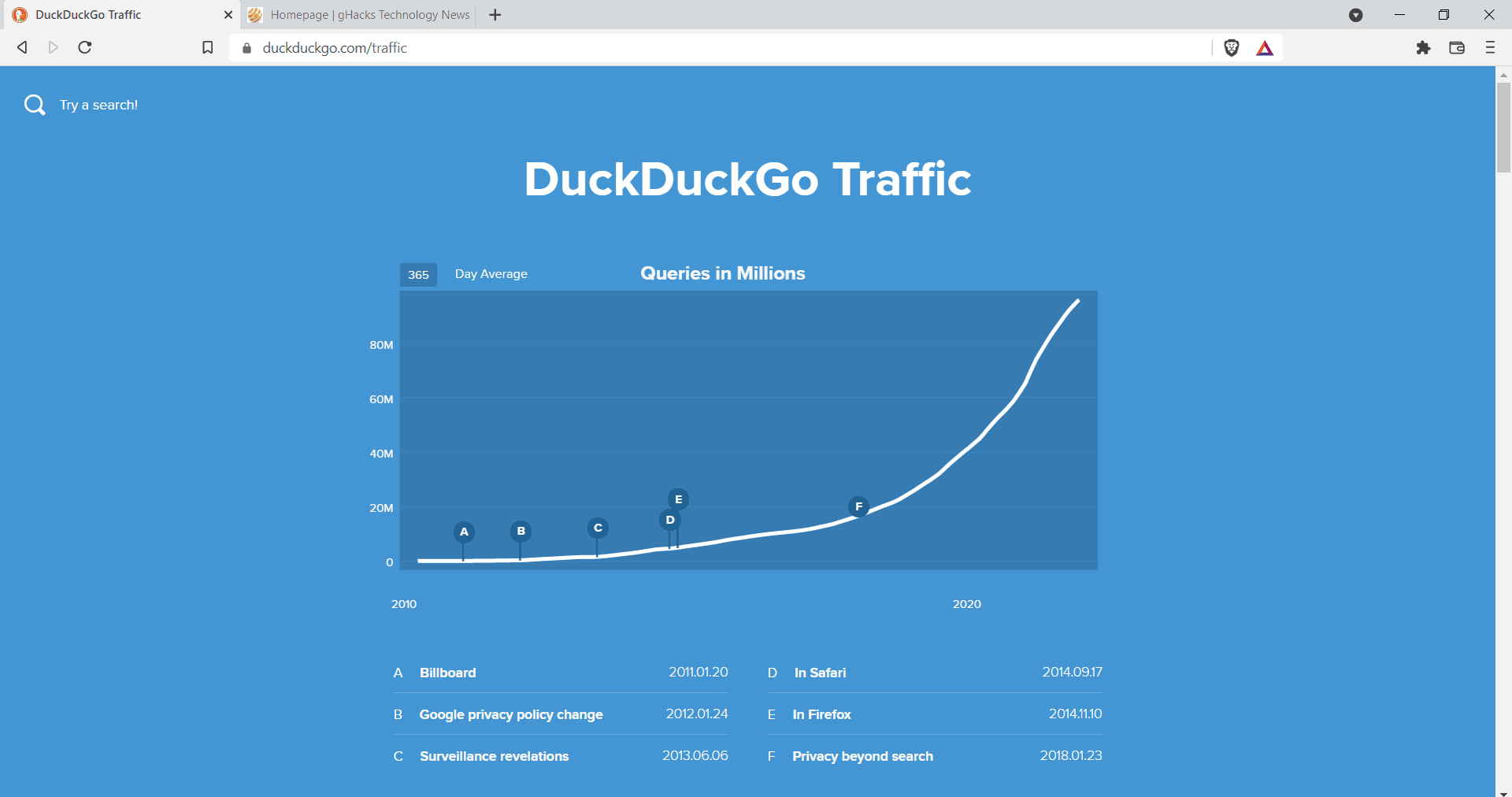 @John C.
imagine believing DuckDuckGo ‘aspect of privacy’ when in 2006, Gabriel Weinberg, has a history of privacy abuse, starting with his founding of Names DB, a surveillance capitalist service designed to coerce naive users to submit sensitive information about their friends.

Or they have been caught breaking their own supposed privacy terms multiple times, like when their android app would send to their servers and store all the URLs input by users.

First privacy on the internet is pretty much as real as Santa Claus, and the description fits perfectly fine because still today in 2021 we see on the streets weird dudes that could be bad people wearing ‘Santa’ clothes because it is all marketing and for money, same as privacy, marketing and monkey, not a real thing.

You go to DuckDuckGo and the first thing uBlock blocks a couple of “improving.duckduckgo” images, now make a search and you will see like 10 more, Brave doesn’t block because they are 1p, but they are whitelisted as “1p analytics” the thing is blocking 1p is pretty much useless because you are already giving your IP and other information to any domain you visit.
But what information do you think those “analytics” want to grab from you?

They use Microsoft Bing, so they are sharing your information with Microsoft and Microsoft is storing it longer than they do, do you think only because it doesn’t include your full IP you are now invisible to Microsoft knowing who you are? I mean, there are millions of ways to figure out who someone is, by the way you type, the way your sentences are made, your searches, etc etc.

is this still a thing “Similarly, we may add an affiliate code to some eCommerce sites (e.g. Amazon & eBay) that results in small commissions being paid back to DuckDuckGo when you make purchases at those sites.”?

I mean, you literally have someone injecting affiliate links but somehow you have to trust them your information is not being leaked or traceable back to you?

I mean, do you really trust them? Do you really trust any company that uses Bing? Because duckduckgo is not even useful for much, since they censor content on top of Bing, so they are not helping the internet in that aspect either.
But all of them share information with Microsoft, so you are giving your information to two companies… why not use Bing directly then? you would save yourself and just give it to one.

Only because they say they “don’t collect any information” which has been shown it is a lie many times, it might be a myth just like every ‘aspect of privacy’ on the internet, because once you are connected to the network someone is getting your info.
I mean it sounds the same scheme Microsoft says with their privacy policies and google and amazon and apple and everyone else, like a copy and paste document they don’t respect.

They have weird partnerships with weird companies, like yahoo, do you trust Yahoo? or what about the fact they use(d) Microsoft email services? (like… they don’t seem really worried about the privacy of their company)

They were accused of fingerprinting users using the Canvas DOMRect API on their search engine.

Why aren’t so-called private search engines DuckDuckGo or Startpage offered in Epic? Why are you unable to trust them?
They wrote us often — until we asked them to tell us how they worked. Since then, they’ve refused to tell us what data they send to their partners Google/Bing to retrieve search ads. It’s misleading to say you don’t save any data if you’re still sending it to other partners who are. Clicking on their ads sends you and your data directly to Google or Bing which is not disclosed plainly to users by either search engine. It’s strange to call yourself a private search engine when your business model depends on sending your users’ personal data to Bing or Google. We’re thus unable to believe they offer any meaningful privacy benefit versus using Bing, Google or Yahoo directly.

Do you still really think a company like DuckDuckGo has any aspect of privacy? is it reality or just more internet fantasy marketing scheme being thrown at users?
Like an illusionist, distracting you with one hand to make a trick, because it is not ‘magic’ it is not real. Just like google and apple and Microsoft and other evil powerful technology companies that made internet their own little kingdom and all they need to do is the same thing anyone in power will say, what you want to hear, while they don’t care about it, and DuckDuckGo like any other companies have the same privacy documents saying what you want to hear.

Search Engine DuckDuckGo had another record year in 2021