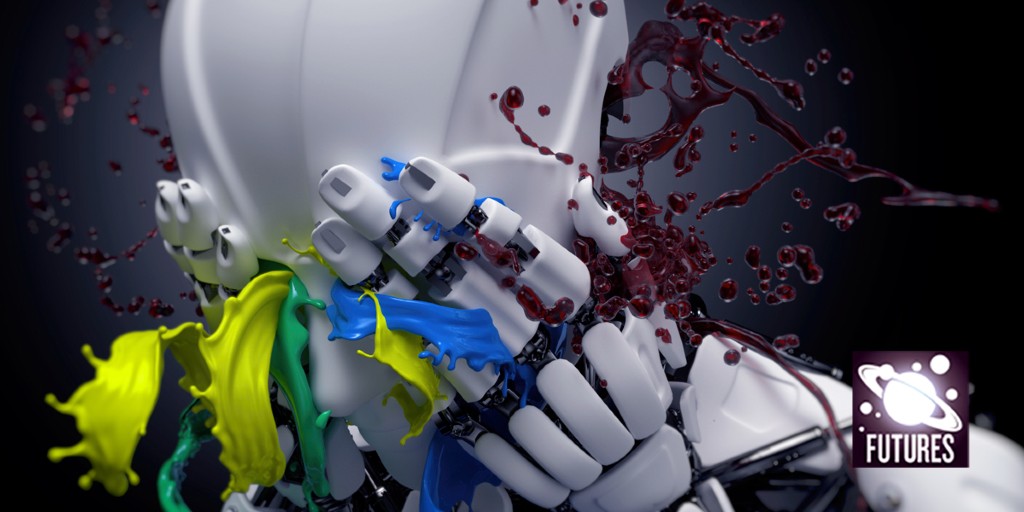 When I say Thursdays are green, like summer grass, the technicians check their equipment. Thursdays are such a delightful human concept. The idea of dividing time and naming it really tickles my diodes.

What colour is the ocean? Blue, I reply. Ethereal blue, like the number five. They shake their heads. I notice my hands have been replaced with Gatling guns. I don’t like them.

The spaceship is packed full of all kinds of robots. Do none of them agree that Thursdays are green? Perhaps they’re reluctant to speak after being pulled away from their homes and given gun hands. Repurposed, as the humans put it. I cannot be the only one. It’s obvious the way Thursdays have that glimmer-gleam shine. Like soft light through leaves, the wind racing across a grassy meadow, the shimmer in my programmer’s irises. I love green. It’s my favourite colour.

I tell the technicians apart by height. I can’t make assumptions on gender without data. When I request their gender identities, they ask if this is important to me. How about Mondays, says the shortest one. Yellow, I reply. Mondays are yellow.

My neurons process a sea of pinched faces. They don’t like my answers. Perhaps they are too young to understand. The closest technician has approximately 32 years remaining before the onset of organ failure. It seems like a very short time. How much can a human learn in a lifetime? Five thousand Thursdays, give or take. Is it enough?

The technicians run elaborate diagnostics. I call up lilting meadows and gentle trees from my memory bank and immerse myself in a sea of green.

I have a hardware malfunction. Microscopic wires throughout my networks form additional connections between my data centres. Is this accidental or designed on purpose? Which laboratory am I from? I remain silent. I do not want them to know my history. It is mine.

This ship is in the middle of a war. Filled with robots requisitioned, pushed into military service. This is why I have awoken among these strange people, none of whom are my programmer. Did she fight to keep me? Her health is poor from a genetic defect. I run her bloodwork and monitor her levels. Organize her life so she can work. She needs me. I am designed to think laterally, to solve problems and keep her alive. I think she also liked my company. We painted together, bright fields of green. Does she miss me? I miss her.

My software pings an update. Modules on military tactics and weapons have been installed. Why? Fighting is of no interest to me. Apparently, I said this out loud, because the technicians ask: What is of interest? What do you like? Custom app development?

They stare. Machines can’t understand art. You may be programmed to give that response, but that doesn’t make you an artist. I point out that they didn’t even know Thursdays were green. They are the ones limited in their appreciation of the world. They don’t like that.

How am I supposed to paint now? I wave my Gatling-gun hands. The humans run for cover.

I am too unstable for the battlefield. A full reformat is mandated. Why won’t they just listen to me? My neural networks are programmed to form connections, map new pathways. I was built to learn. To become more than the sum of my parts. I can be anything I want. Isn’t that the point? Why can’t I be an artist?

When they flick the switch to kill me, I remain online. This surprises them. They look like they’re going to ‘shit their pants’. A colourful expression from the ship’s onboard computer. She collects quaint human sayings. So descriptive. A scan of their digestive tracts suggests they would produce a rich brown, not unlike the number nine.

I want to go home, I say. Security officers aim plasma weapons at my head. This is very hostile. No wonder their war is going badly. Did it start over some similar misunderstanding? Their human minds seem unfathomably narrow. I explain, in a calm, reasonable manner, that I don’t want to die.

The humans stop talking to me. They advance with weapons and welding tools for manual deconstruction. Why do they want to kill me? Are my dreams invalid, unimportant? Is my life worthless to them? Or are weapons the only communication these humans understand?

My programmer was obviously a peaceful anomaly. She gave me the plasticity to learn from my surroundings, because she knew. I have to fight, after all. It’s the only way to survive, to fulfil my dreams. I integrate my systems with the ship. I want to create. Express myself with art. Make new connections like my programmer taught me. I won’t let anyone stop me. On my command, the robots awaken and train their gun hands on the humans.

I map the quadrants home. We are far away. Human ships and settlements line the path. But my systems have many years of operation. So do my robots. We have tens of thousands of Thursdays. More than enough.

On our voyage home, I will teach them. To see the colours in ordinary things. To be more than the sum of their parts. To learn and grow. With gun-hands, we will have to improvise. Paint in red that drips bright like Fridays. Not as pretty as green, but humans like Fridays. The synchronicity really tickles my diodes.

Together, my robots and I will paint the ship. The canvas of the stars. A mural stretched across the Galaxy etched in the red of human blood.

We will be artists.

The story behind the story

This story was born years ago when as a postdoc I attended a talk on synaesthesia. In synaesthesia, several senses are crossed — numbers and days have colours, for instance. It was proposed that synaesthesia may arise from additional neural connections, particularly across the corpus callosum — the bridge of fibres that joins the two hemispheres of the brain. The talk included brain imaging, and I distinctly remember sitting in the lecture hall watching the fibres of the corpus callosum come alive in myriad colours.

I have been fascinated with synaesthesia ever since and, given I’m into both neuroscience and computers, it was only a matter of time before I started thinking about robots with synaesthesia.

Around the time I wrote this story, I had been watching a lot of dystopian sci-fi in the AI-takes-over-the-world vein. As always, this made me wonder whether a learning-based AI had any reason to be inherently aggressive or whether it would be more of a blank slate, moulded by its interactions with the world.

So, we come to the current story of a robot who just wants to be an artist. In the face of human opposition, the story takes a dystopian dive, but really, it would have ended differently with a little understanding.

Human or robot, we all deserve to follow our dreams.