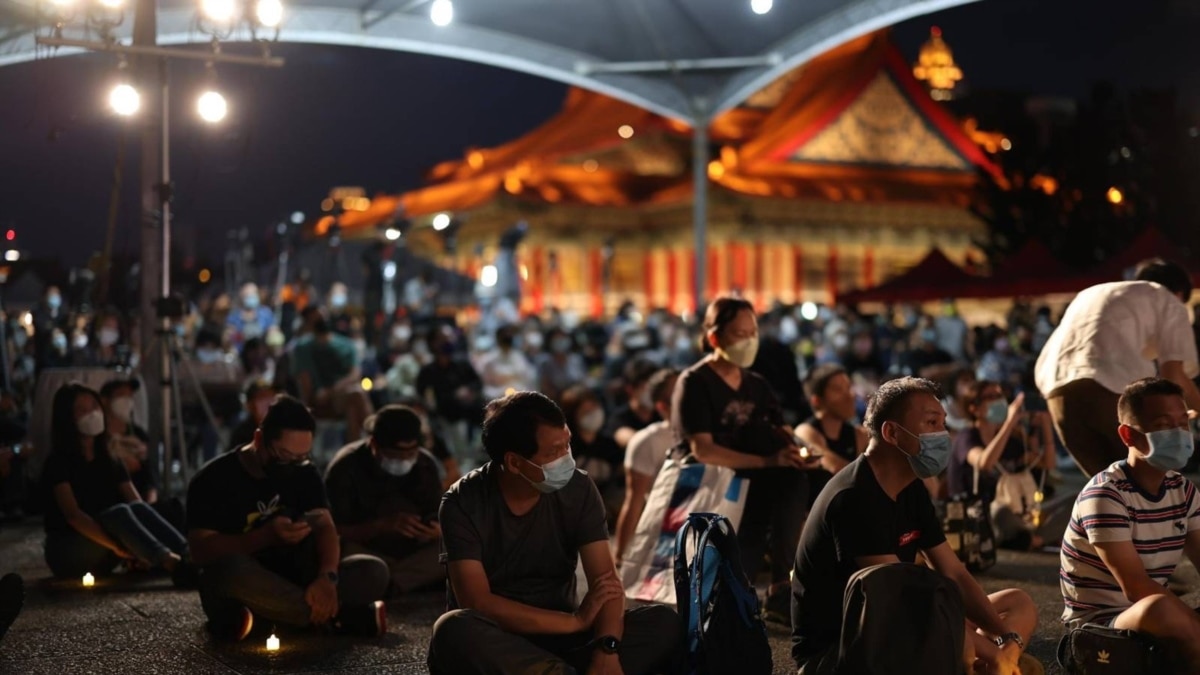 Taiwan marked the 33rd anniversary of the Tiananmen Square Massacre in China with a candlelight vigil Saturday evening, where a three-meter-tall replica of the “Pillar of Shame” statue was unveiled to commemorate those in Beijing who died while fighting for China’s democracy in 1989.

Hundreds of people attended the memorial held in Taipei’s Chiang Kai-shek Memorial Hall – the only such event in the Chinese-speaking world after authorities in Hong Kong banned the city’s once-annual vigil in its Victoria Park for three consecutive years and ordered the original statue’s demolition in December 2021.

The ban is seen as part of the Hong Kong government’s move to snuff out political dissent and a sign that Hong Kong is losing its freedoms with Beijing tightening its grip over the semi-autonomous city.

The vigil in Taipei, themed “The World Supports Freedom,” not only showcases Taiwan as a free and democratic country, but also highlights a sense of urgency and relevancy for Taiwanese to speak up against China’s expanding suppression, says Tseng Chien-yuan, chairman of New School for Democracy, one of 23 civic groups in Taipei that organized Saturday’s vigil.

“Taipei is the city where China’s military jets keep hovering around – the very same regime that brutally cracked down on protesters on June 4th, 1989, and mass protests in Hong Kong. If those of us in Taipei won’t exercise our rights in a sovereign state and democratic society to speak up against the massacre, how can we Taiwanese expect to keep our freedoms and democratic lives? Or how can we expect support from other countries should China one day invade Taiwan?” Tseng told VOA at the sideline of the vigil.

He said that Beijing’s Tiananmen protests had inspired Taiwan’s student movements in 1990, which paved the way for the island’s transition toward full democracy.

And today, China should look to Taiwan as a role model to give up its authoritarian one-party rule and usher in democratization, he added.

Saturday’s vigil attracted many like-minded people, who call for efforts to keep the memory of the deadly crackdown alive and urge Beijing to redress its own wrongdoing in crushing the pro-democracy movement three decades ago.

Among them is Leslie Liao, a 28-year-old student from China, who is studying sociology in Taipei.

Liao said many of her peers in China are unaware of the historical event, which killed hundreds of students, if not thousands, in Beijing.

She added that she was overwhelmed to see a memorial in Taipei.

“This is a piece of history, that belongs to a place [in China] where public commemoration is not allowed. That fact that such a memorial can only be held in another place [in Taipei] is just so absurd that it is beyond me,” Liao told VOA from the Taipei memorial after she placed flowers and paid tribute to victims of the massacre.

She said that she hopes to see wrongs associated with the massacre be righted one day.

For years, the Communist Party has tried to repress memories of the brutal massacre, what is thought to be one of the bloodiest political crackdowns in modern history. Beijing has buried news about the protests across China and even gone to lengths to put those trying to commemorate the event behind bars, said Chinese historian and participant in the 1989 Tiananmen Square protests, Wu Renhua.

A Wuhan, China-based political dissident, who survived the massacre in 1989, told VOA on the condition of anonymity for fear of personal safety that he is happy to see Taipei pick up the torch, carrying on the legacy of the June 4 movement.

“I hope the candlelight from Victoria Park [in Hong Kong] can keep shining in Taipei’s Liberty Square until the authoritarian regime collapse[s]. We’ve seen such signs. Freedoms and democracy will happen to the Chinese people,” he said.

Fang Zheng, a student protester whose legs were both amputated after being run over by a tank during the crackdown, agreed.

“Now that the torch in Hong Kong is out, it becomes all the more important for Taipei to help keep the memory alive. Taiwan’s democracy sets a very good example for China,” Fang, who now lives in the U.S., told VOA over the phone.

Kacey Wong, an artist from Hong Kong, who is now in self-imposed exile in Taiwan, said it’s important that people in Taiwan care and identify with the ideals that student protesters in 1989 fought for – a form of what he calls civic nationalism.

It is as much Taiwan’s duty as the world’s to urge China to pursue democracy, said B. K. Hsieh, a 36-year-old citizen of Taipei, who attended the vigil.

“I think China will turn a blind eye to us. But the event can raise the awareness internationally, forming a force to pressure China. Democracy is important and a universal value, which no modern countries should resist against the times,” Hsieh told VOA in the area of the vigil.

In additional to the memorial in Taipei, more than 50 former leaders of the student movement, including Wang Dan have put on an exhibition in New York, documenting the 1989 protests.

They also plan to rebuild the June 4 Museum in the U.S. after the one in Hong Kong was closed last year.