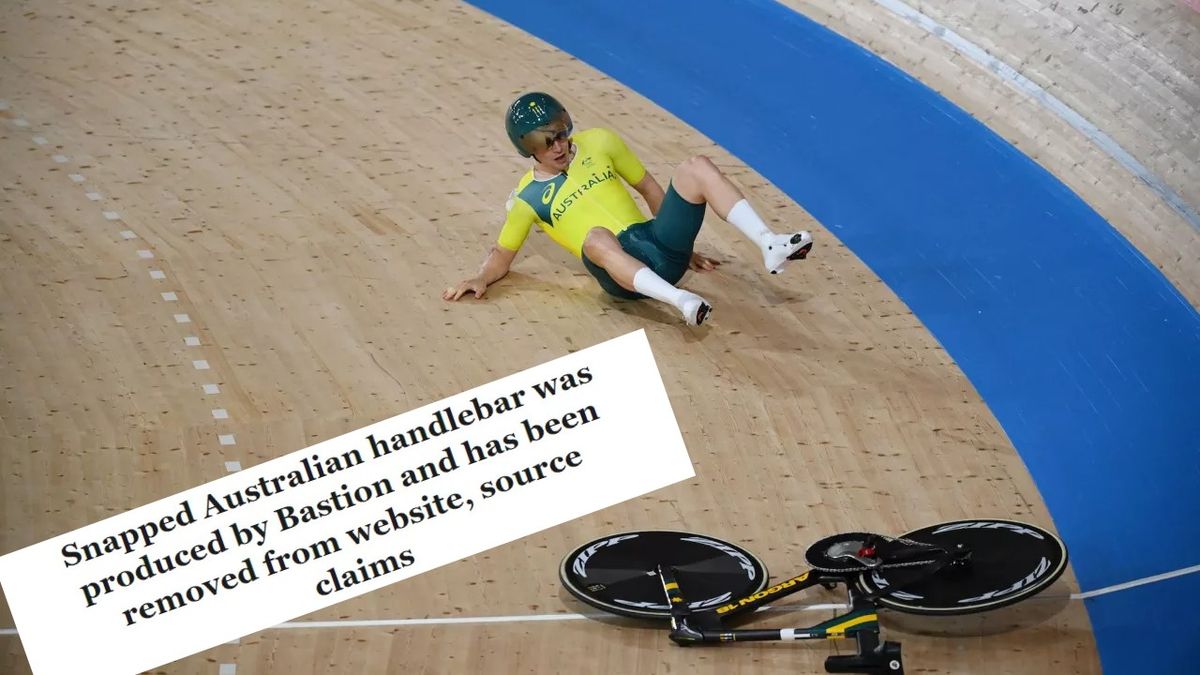 We’ve collated the eight best-performing tech news stories to remind you of some of the ‘highlights’ of the year. However, bear in mind that this list is based entirely on website traffic – where the truth is, calamity reigns. In other words, it’s highly likely that the best-performing stories will have the worst things happening in them.

That’s the disclaimers over. So which stories were you reading in 2021? Absolutely in particular order, here we go…

Snapped handlebar was produced by Bastion and has been removed from website, source claims

Bastion is an Australian brand, specialising in Additive Manufacturing (3D printing), and it proudly produces components for the Australian Olympic track riders.

CW’s source confirmed the part was made by Bastion, and we noticed that its base bar page was soon 404’ing – a check  of the page cache showed us that the base bar that had been on the page looked extremely similar to the snapped component.

Bastion later confirmed that the part was a result of its manufacturing, and said it was “working with the Australian Olympic Team to understand the cause behind the failure.”

Whilst we cannot make any comment on Bastion’s products in particular, this story – and others this year – have raised some questions over the regulation of brands using 3D printing.

Why does Cav’s chain keep coming off after sprints?

There have been many memorable racing achievements this year, and Mark Cavendish’s equalling of Eddy Merckx’s record of 34 Tour de France victories has got to be one.

But, as he rolled across the finish line on Stage 13, we couldn’t help but notice the Manxman’s chain hanging limply from the front derailleur.

It would be easy to write off as just pure and simple good luck that the drop didn’t happen a second sooner and derail his chances of equalling the record.

But having seen the very same thing happen at the end of stage two in the Presidential Cycling Tour of Turkey, it seemed far too much of a coincidence to be chance.

We spoke to Dov Tate of Parcours wheels, an Oxford engineering graduate who’s conducted a groundbreaking study into the way wheels behave in real-world conditions. He put it down to likely being the result of the speed of the freehub and the wheel combined with the extremely sudden stop in pedalling.

So, although it might look as though Cav had a lucky escape, it looks like it’s just his celebration that’s causing the chain to drop. So long as he only sits up when there’s no more pedalling to be done, it shouldn’t cause a problem.

The unfortunate incident of the failing tubeless sealant

If there’s one conversation that’ll get cyclists engaged in passionate debate, it’s tubeless vs clincher – and hookless vs hooked – wheel and tyre technology. But I never expected what was basically a 1,000 word rant about a ride blighted by punctures to interest quite so many readers.

My issue wasn’t – and still isn’t – with tubeless tech at all, it works excellently on gravel bikes, mountain bikes, car tyres – any tyre run at a pressure lower than 50psi. Above that, and the sealant can – occasionally – struggle to seal a hole. Since the road bike market is pushing tubeless so much, I think it’s time that was addressed. I do know that at least one brand has admitted this is an issue, and is  taking steps to address it – so maybe we’ll see more road specific tyre sealants in 2022.

Is Ford about to reinvent the derailleur?

When a big player like Ford decides to get involved in e-bike development you can expect to see the pace of innovation shift up a gear.

The automotive giant registered a US patent for a front derailleur that wasn’t actuated by a cable or a Di2-style servo. Ford’s design uses two mouldable wires made from Nitinol, a titanium nickel alloy that changes shape when an electric current is applied to it.

When the wires change shape they move a chain guide from one chainring to the other.

With descriptions of a “control panel” and “the cadence of a casual rider” and “automatic sprocket shifting” the Ford derailleur appears to be aimed at the e-bike market, representing a very credible stab by a company with a huge amount of R&D muscle not to mention money at producing an efficient, lightweight and low-cost automatic gear system.

The patent was uncovered by wheelbased.com in October – it will be fascinating to find out how far Ford is planning to go with it. Shimano, SRAM and Campagnolo watch out…

Specialized due to issue recall on Tarmac SL7 bikes

The Specialized Tarmac was launched in 2020 as a lightweight aero bike, merging with the outgoing Venge and thus incorporating greater integration. However, in October 2021, it emerged that the brand was due to issue a voluntary recall over safety concerns.

Sure enough, on October 12, Specialized recalled all Tarmac SL7 bikes “on the road”. The concern was over the compression ring inside the integrated headset. Specialized said: “Harsh impacts may put extraordinary stress on headset components and may initiate a crack in the fork’s steerer tube.” Specialized produced a new compression ring and expander plug.

We had a lot of questions about this recall, such as why it – and the accompanying stop ride notice – was only issued when replacement parts were in stores. Specialized told us that there was “no further comment on the voluntary recall”.

Recalls are nothing new. However, with integrated systems and an ever increasing drive for lighter weight frames, could we be seeing more recalls in 2022?

Is Sonny Colbrelli’s Merida Reacto the most normal bike ever to have won Paris-Roubaix?

Paris-Roubaix is the race that’s the hardest of all on equipment. In the past pro teams used to raid the service course for old handbuilt wheels with tied and soldered spokes and Ambrosio Nemesis rims. Various wacky bespoke suspension systems were trialled – anything to take the sting out of the jagged pave.

But en route to his 2021 win Sonny Colbrelli rode a Merida Reacto Team aero bike with a Shimano Dura-Ace Di2 electronic groupset, Vision Metron 60 SL wheels, disc brakes and Continental tubeless tyres – the exact same setup he would use on smooth tarmac – and also a spec that’s hardly any different from the one any of us could buy from any Merida dealer.

He was riding the new hookless-compatible Continental Grand Prix 5000 S TR tubeless tyres and not tubulars.

Possibly the only deviation from the standard spec was with the bars: instead of the Vision Metron 5D ACR integrated cockpit that comes as standard, Colbrelli was using a standard round-section bar with a separate stem – but that was his only concession.

Certainly it’s not the first time Paris Roubaix has been won on a standard bike. Mat Hayman also won on an aero bike – the Scott Foil – in 2016, but we think Colbrelli’s bike was even more standard because Hayman was using pro-only Continental Competition tubs.

Is this a watershed moment? Have we finally reached a point where bikes are so strong, reliable and comfortable that they can be ridden on any terrain without modification?

Back in June, we reported on the closure of Shimano’s Malaysia component factory due to the government’s national lockdown. The factory had been operating at 60 per cent capacity since May 29, but as of June 10 and until June 28, the factory had been forced to completely close.

Given the shortage of stock from the ongoing supply chain issues preceding, this was hardly welcome news to those needing parts.

As this factory only produces Shimano’s lower tier components, this wouldn’t have affected the rollout of new Dura-Ace and Ultegra. But even though the groupsets were released in late August, it is notable that pro teams weren’t able to ride the components before the end of the season.

Now, it’s not like there’s been a complete dearth of Shimano components, but those looking for specific items, such as a crankset in a particular arm length and tooth count, will have surely noticed options becoming more limited and potentially long waits for the products to come back into the stock.

It’s a bit much to hope that these lingering issues will solve themselves over the festive period – the time when international supply chains are at their most strained, but hopefully as we move into the spring, parts will start to become easier to come by again.

In June 2021, the UCI banned the use of metabolic sensors in racing. This presented a problem for Supersapiens, the glucose tracking sensor which had sponsored a number of pro teams, including Ineos and Canyon-SRAM.

Speaking with UCI innovations manager Mick Rogers, he gave us a number of justifications. Firstly, there were concerns that these sensors could make racing formulaic – like Formula One, where machinery and tyre compounds are hugely influential. He also stated concerns over possible inequality, if some riders can’t afford the tech, and the worry that data could be maintained by teams when a rider moves on.

In turns, Supersapiens CEO Phil Southerland called this decision a step backwards in rider welfare. He said teams had reported instances where riders had crashed in races, and it was later discovered that they were hypoglycaemic, with women being more at risk due to fluctuations in metabolism due to hormonal changes through the month.

The ban remained in place, and Southerland – at the time – was contacting teams to offer sponsorship to allow them to be used in training. Will the UCI make a U-turn in 2022?