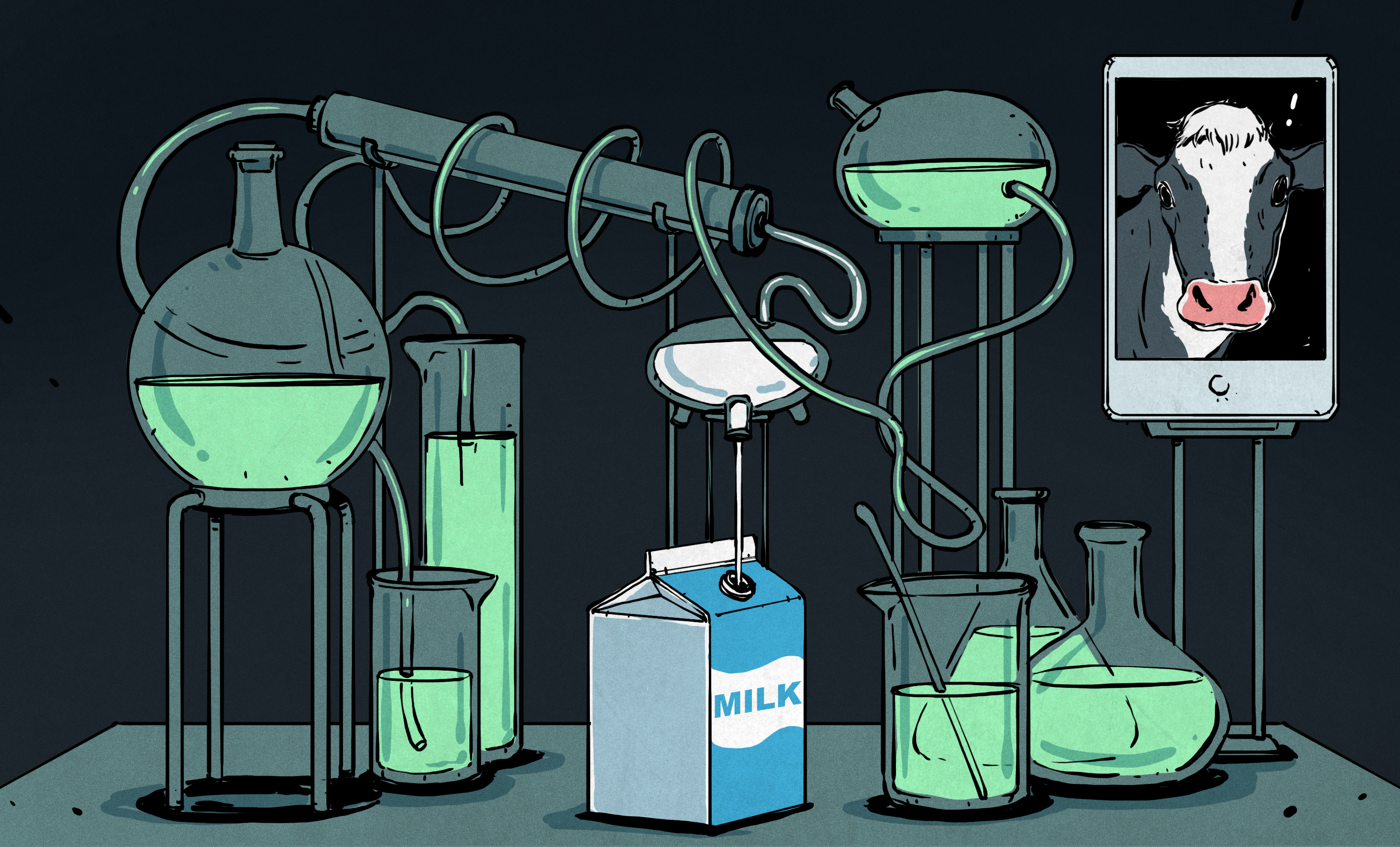 What would we do without milk in modern day society? Although lactation originally evolved as a way to provide a newborn mammal with nutrients and the other essentials during the first weeks of their life, milk has for thousands of years now been a staple food in human cultures. Whether from cows, camels, sheep or other mammals, each year humans consume many liters of this mythical substance, with our galaxy’s name – the Milky Way –  coming courtesy of Greek mythology and a spilled milk incident.

A major issue with mammalian milk, however, is that it is only produced by females for a certain time after giving birth, which requires for example a dairy cow to constantly go through pregnancies, which is both cumbersome and not very animal-friendly. Simultaneously, the newborn offspring cannot drink this milk, but must be provided with an alternative. For these reasons synthetic milk is becoming an increasingly more popular animal- and environmentally-friendly alternative.

For years now, companies such as US-based Perfect Day are producing milk that’s for all intents and purposes identical to cow milk, with the added advantage of being free of lactose and other problematic additions. The best part of this all? It’s all done with existing fermentation techniques.

The production of proteins in a cheap and efficient manner has been one of the triumphs of the 20th century, with success stories like insulin, the hepatitis B vaccine and chymosin all being produced using industrial fermentation that employs recombinant DNA with bacteria, yeast and fungi. These single-celled organisms are grown in bioreactors where they absorb nutrients from their environment, and use these to create the proteins which are encoded in the newly inserted DNA. Once enough of these proteins are created, the contents of the bioreactor are sent off to be lysed. This breaks down the cells, freeing the intracellular proteins for further processing.

Originally, replacement insulin for diabetes patients was extracted from animals. Since the 1980s, modified E. Coli bacteria are now producing virtually all of the world’s insulin supply. Similarly, chymosin is a key part of rennet, the collection of enzymes that is essential in the production of cheese and related products. Originally this substance was usually extracted from the stomachs of butchered calves, but thanks to recombinant DNA, bacteria can also produce this enzyme. These days, over 95% of cheese produced in the US uses rennet from bacterial sources.

The recombinant hepatitis B vaccine from modified yeast replaced blood-derived vaccines, and over the past years the Impossible Foods company has made waves with its use of modified yeast that produces leghemoglobin. This is similar to hemoglobin as found in animals, and adds to this company’s meat-like products like its Impossible Burger.

When it comes to industrial fermentation, we distinguish a number of types:

The fermentation process as we know it from brewing beer, creating wine, bread, yogurt and other types of fermented food is the second type (extracellular). Sugars are used by the microorganisms and converted to the alcohols, acids and other target chemicals that change the properties of the input materials into the desired product. In the case of insulin, vaccines, and other types of protein production we use the third type, with intracellular production of the desired protein.

In order to apply the same approach to synthetic milk, we have to identify the protein(s) so that an encoding DNA sequence can be inserted into a microorganism .

Milk Proteins Without The Animal

Milk is defined as an emulsion of butterfat globules within water-based fluid, containing carbohydrates, proteins, vitamins and minerals. The proteins found in milk are both the whey proteins (like β-lactoglobulin) and the caseins (like K-casein) that form micelles: aggregates of thousands of these proteins. The Perfect Day company focuses on β-lactoglobulin, as it’s the main whey protein in mammalian milk. Whey is a byproduct of cheese production, and has many commercial uses.

Whey proteins aren’t the only option here, of course. As recently reported by The Guardian, a number of start-up companies are seeking to produce the full milk product, including the whey proteins, casein proteins and the other elements that provide milk with its characteristic properties and taste. Of the 20+ proteins in cow’s milk, most are casein proteins, with the casein micelles playing a key role in the thermal stability that enable its use in hot drinks.

Australian start-up Eden Brew is looking to use recombinant yeast to produce six of the most common milk proteins, with plans for an ice-cream in 2023, followed by plain milk by 2024. This is indicative of the biggest challenge in this new industry: namely scaling. For each protein added you need to maintain the recombinant strain of the microorganism, set up its own production line of bioreactors and processing equipment and provide these bioreactors with nutrients.

Even though the general process is similar to that of insulin, the sheer scale is a a few orders of magnitude larger, since not only do about 80% of the world population consume milk, they also do so on a scale that’s far beyond the relatively small amounts of insulin produced in these bioreactors annually. Scaling up the production facilities and setting up a supply chain will take time, but the benefits of doing so would be astounding. One only has to picture the number of animals needed to produce insulin today if we had not created recombinant insulin to get an idea of the sheer scope here.

A good perspective on the environmental footprint required by cow’s milk, as well as a number of plant-based alternatives is provided by Our World in Data in the form of the following chart:

What this chart tells us is that although cow’s milk scores pretty poorly on environmental metrics, plant-based alternatives come with their own sets of trade-offs. Here synthetic milk offers a tantalizing new option: since it is produced in bioreactors by microorganisms, the land use is minimal, with the other parameters limited by the source of electricity and nutrients for greenhouse gases, as well as the overall filtration and water recycling ability of the facility that houses the production lines.

Another important aspect here is that of monocultures. For dairy cattle, large stretches of pasture are required, while for plant-based alternatives large croplands are used to grow just soy, rice, almonds, etc. A bioreactor facility would avoid the pesticides, fertilizer runoff, and greenhouse gases of natural milk production.

Whey To The Future

One thing that synthesized milk definitely has going for it is that it doesn’t necessarily do anything new. Using techniques pioneered as far back as the 1970s in the medical field, we have now reached a point where we can modify microorganisms to produce proteins easily and consistently. Even if buying a liter of synthesized milk off the shelf at the local grocery store is still a few years off, whey proteins are already being produced this way, displacing at least part of the demand from cow’s milk.

Although the milk consumption per capita has remained relatively constant since the 1960s, the world population has increased by a few billion (3 billion in 1961, 8 billion in 2022), which means a corresponding increase in demand for milk. Even if synthesized milk won’t outright replace cow’s milk and dairy farms along with it over the coming years, maybe it can make a useful dent in the increased demand.

It seem reasonable to conjecture that as the supply chains for bioreactors and related equipment for such large-scale industrial fermentation ramp up, synthesized milk producers might just begin to not only supply the ice-cream and baked goods markets, but also push into the regular milk market. A lot here depends on how fast and how cheaply this can be made to scale.

At the very least there definitely is no lack of start-ups, with in November of 2022 US-based New Culture announcing its mozarella cheese made using synthesized caseins. Much like the Impossible Burger with its leghemoglobin protein from yeast, this makes it a vegan option since no animal was involved at any stage of the production, which is an aspect that for example cell culture meat struggles with.

Whether this will be enough is hard to say at this point, but with approved products on the market available today and more in the pipeline, some optimism would seem warranted. Even if some will definitely want to argue whether synthesized milk is even ‘real’ milk.

Travel Blog
We use cookies on our website to give you the most relevant experience by remembering your preferences and repeat visits. By clicking “Accept All”, you consent to the use of ALL the cookies. However, you may visit "Cookie Settings" to provide a controlled consent.
Cookie SettingsAccept All
Manage consent