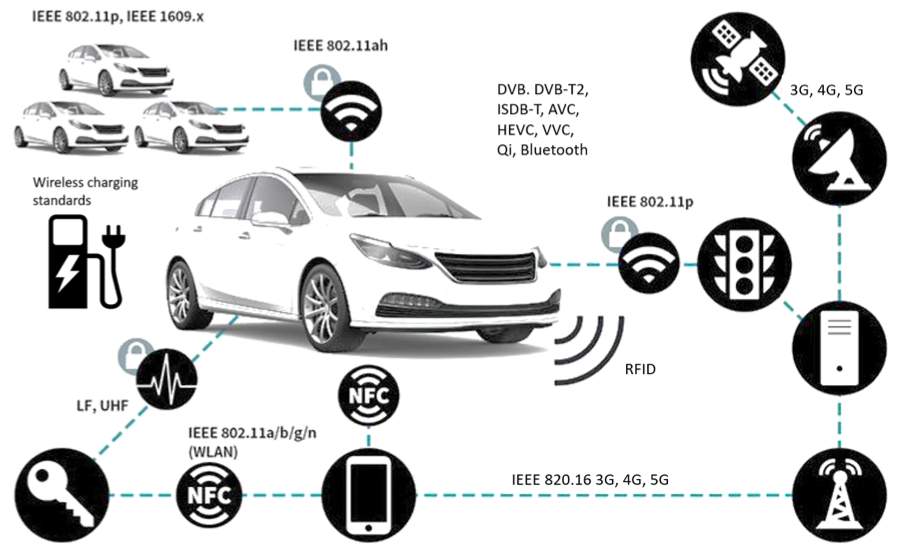 The increasing integration of information and communication technologies in vehicles is creating new challenges for licensing patents in general, and for negotiating royalty payments for standard-essential patents in particular.

Most market experts predict dramatic changes in the auto industry because of shifting consumer preferences, new business models and emerging markets. The sector also looks set to be heavily affected by new sustainability and environmental policy changes, as well as by upcoming regulations on security issues. These forces are predicted to give rise to disruptive technology trends, such as driverless vehicles, electrification and interconnectivity.

Forecast studies posit that the smart car of the near future will be constantly exchanging information with its environment. Car-to-X or car-to-car communication systems will enable communication between cars, roadsides and infrastructure, while mechanical elements will soon be embedded into computing systems within the internet infrastructure. The auto industry is one of the first sectors to rely on Internet of Things (IoT) technologies, which connect devices, machines, buildings and other items with electronics, software or sensors. Interconnectivity across multiple vehicle parts and units relies on the specification of technology standards such as 4G or 5G, Wi-Fi, video compression (HEVC/VVC), Digital Video Broadcasting (DVB) and Near Field Communication (NFC) or the wireless charging Qi standard to name a few (figure 1).

However, many of these standards implemented in cars are subject to an increasing number of standard-essential patents (SEPs). The integration of highly patented standardized technologies creates economic risks for vehicle manufacturers as royalty rates that can be considered FRAND are yet debated in many cases also yielding SEP litigation. While first organizations have started to set up licensing programs for e.g. 2G, 3G and 4G SEPs (e.g. AVANCI), many companies in the automotive supply chain still have no access to SEPs. Moreover, many of the automotive industry companies that adopt standards subject to SEPs have little experience with negotiating a SEP license and limited information about the SEP ownership situation. Understanding the overall SEP landscape is, however, critical for the smooth adoption of connectivity standards, maintaining profitability, and protecting the capacity to sell new products, components, systems, or whole vehicles with enough access to third-party patent rights.

Figure 2 shows the number of declared for 3G, 4G and 5G that mention a vehicular application with a sharp increase since 2018 especially driven by 5G declared patents that seem to increasingly consider the application of 5G in vehicles.

Figure 2: Number of declared patents that mention a vehicular application as to declared standards (IPlytics, 2021)

Standard setting in the auto industry is mostly associated with either setting de facto standards within the manufacturers’ production lines or ratifying safety standards set by legislation. However, in the information and communication technology sector, standard setting goes beyond the specification of compatibility standards and can be described as the joint development of sophisticated technologies. Companies meet in standard-setting working groups and present their innovative technology proposals for selection and incorporation in highly complex standardised systems. Not only do development and use of standards differ between the auto and communication industries; so too do the patent licensing mechanisms. Patents in the automotive industry are usually licensed on vertical levels. A Tier 1 manufacturer would not usually request licensing fees from an original equipment manufacturer (OEM) but would rather incorporate these costs into its component prices. This allows suppliers to ensure that their components are free of third-party rights. When it comes to license negotiations, royalties are mostly based on a single part improved by an invention – licensing costs have thus had only a marginal influence on vehicle prices so far. The licensing of patents in the communication industry, by contrast, focuses on the end device and thus targets OEMs. Consequently, royalties are much higher by comparison, especially for manufacturers which do not own a patent portfolio to cross-license.

This prospect is already sparking interest among SEP owners with regard to asserting their SEPs against auto manufacturers, as companies from the telecommunications industry watch to see what happens next. While the European Court of Justice (ECJ) and the U.S. Department of Justice (DOJ) have set clear rules for SEP licensing and the use of injunctive relief, there are no concrete guidelines on how to calculate fair, reasonable and non-discriminatory (FRAND) licensing terms for SEPs. The interpretation of existing case law differs radically between jurisdictions ? meaning that while injunctive relief is out of the question in some countries, it is entirely possible in others, such as Germany, where infringing manufacturers are often obliged to provide appropriate security payments even before the initiation of court proceedings. This has created legal uncertainty and unpredictable costs for many car manufacturers.

Future technologies will allow machines or cars to exchange information, directly integrating the physical world into computer-based systems. Interconnectivity of these different systems and communication across multiple devices rely on the common specification of standards. Thus, standardisation also needs to keep up with the technological pace. Therefore, new working groups are being formed to deal with the standardisation of the latest technological achievements for connected vehicles. One of the most active group is the 5G Automotive Association (5GAA) a global, cross-industry organisation of companies from both automotive and telecommunications industries. The goal of the 5GAA is to develop end-to-end solutions for future mobility and transportation services to avoid incompatibility. In other words, the group specifies the implementation of connectivity standards (e.g. 4G/5G) making sure that the full potential of the standardized technologies is utilized for the automotive application. Indeed, when looking at the number of contributions submitted and approved at the different 5GAA working groups at 3GPP (figure 3) the main contributors include handset, chip or network manufacturer such as LG, Huawei, Samsung or Qualcomm, network carrier such as Orange, Vodaphone or AT&T same as automotive companies such as Volkswagen, General Motors, Robert Bosch or Continental.

Similar to the mobile phone industry ? where we observed a transition from feature phones to smartphones, and where new business models, platforms and market participants changed the way that profits were distributed among companies ? we will most likely soon observe shifts and profit redistributions within the auto industry. The current trajectory points towards ever-greater connectivity, from currently used internet-based infotainment systems to more advanced driver assistance systems to fully driverless technologies. Connectivity in cars has the potential to fundamentally change the automotive value chain.

To cope with these challenges, vehicle manufacturers need to face the complex licensing world of the telecommunications industry and ensure that they not only have the right IP strategy in place but also a seat at the table when technology standards are developed. This includes a more comprehensive monitoring of patent filings, SEP declarations, as well as patent pooling but also standards developing activities beyond the known environment of competitors and suppliers in the auto industry. Standards which are developed and set today may well become the fundamental technology platform for emerging technologies and applications in the future.

The licensing of SEPs looks set to become a major issue for the whole auto industry. Senior managers and directors of car manufacturers and car suppliers should bear in mind some key considerations:

An IPWatchdog listed webinar (October 12, 2021, 10:00 am EDT) will discuss these challenges and The Role of Standard Essential Patents for the Auto Industry in more detail.

is the CEO and founder of IPlytics. He earned his doctoral degree with the highest distinction from the Berlin Institute of Technology, with a dissertation on patenting and coordination in standardisation. He then went on to work as a post-doctoral researcher and consultant for the Law and Economics of Patents Group at CERNA, MINES ParisTech.

In his work as an economist and consultant, Dr Pohlmann was confronted with the challenge that standards databases such as those of the European Telecommunications Standards Institute and the Institute of Electrical and Electronics Engineers have no real, meaningful connection with comprehensive global patent databases. He realised that if we are to keep pace with the next technology revolution, then as IP professionals, we need to rethink – even revolutionise – how we approach both patent and standards data, to provide business-ready knowledge for actionable decision making across our organisations.

The Role of Standard-Essential Patents for the Auto Industry