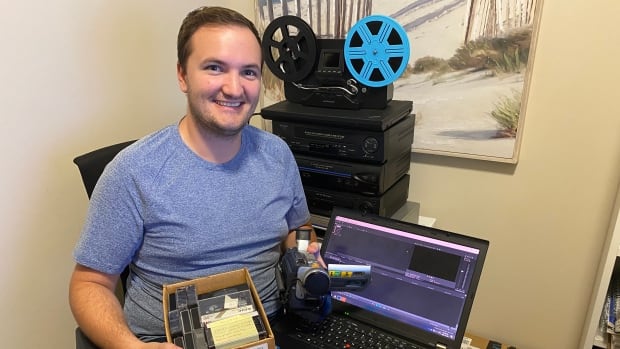 Marshmallow Christmas cards gone wrong and family vacations past — these are the memories that live on Joel Kennedy’s old VHS home videos, and now, thanks to his media conversion business, on his laptop.

“I’m from a family of five kids and we had 30 or so tapes that we had for a long time,” Kennedy said. “We watched them so often that we started to wear out the camera and the tapes.”

In other words, he’s in the business of saving people’s memories.

When his family decided to make the jump from tape to digital for their own collection, Kennedy found a hole in the market — there weren’t many businesses converting old tapes, but there certainly seemed to be a need.

“I thought, well, how hard can this be,” he told CBC News. “Then I thought this might actually be something that’s beneficial to other people as well.”

Part of the conversion process is actually playing the media, for example on a camcorder or a VCR player. To help people make the switch from analog to digital, he’s had to collect all kinds of gadgets and gear that can actually process the tapes.

The end product is a DVD or flash drive his customers can use to load their videos onto a computer.

She had always planned to get her old videos converted, but it wasn’t until she saw Kennedy’s ad on a neighbourhood Facebook group that she committed to making the switch.

She brought in tapes of her daughter’s wedding and a hockey game her husband played 30 years back. That pack also included memories of a special visit from her grandmother 31 years ago.

Cumming’s tapes lasted a long time, but according to Kennedy they’re well past their best-before date. He said tapes really only have a shelf-life of 10-12 years, but can last longer if you’re not using them regularly.

“Specifically VHS tapes, one of the biggest problems is mold,” he said. “If they get moldy, the picture gets fuzzy.”

VHS tapes can also get demagnetized, reducing the clarity and sound of the footage. He recommends storing them in sealed containers that limit exposure to dust and other particles.

And, of course, getting them digitized sooner than later.

“The sentiment I get from a lot of people is ‘Yeah we really want to get them done, we really should do that,'” Kennedy said. “But it’s really not the top priority, because you think if they’re just sitting on the shelf there’s no harm done.”