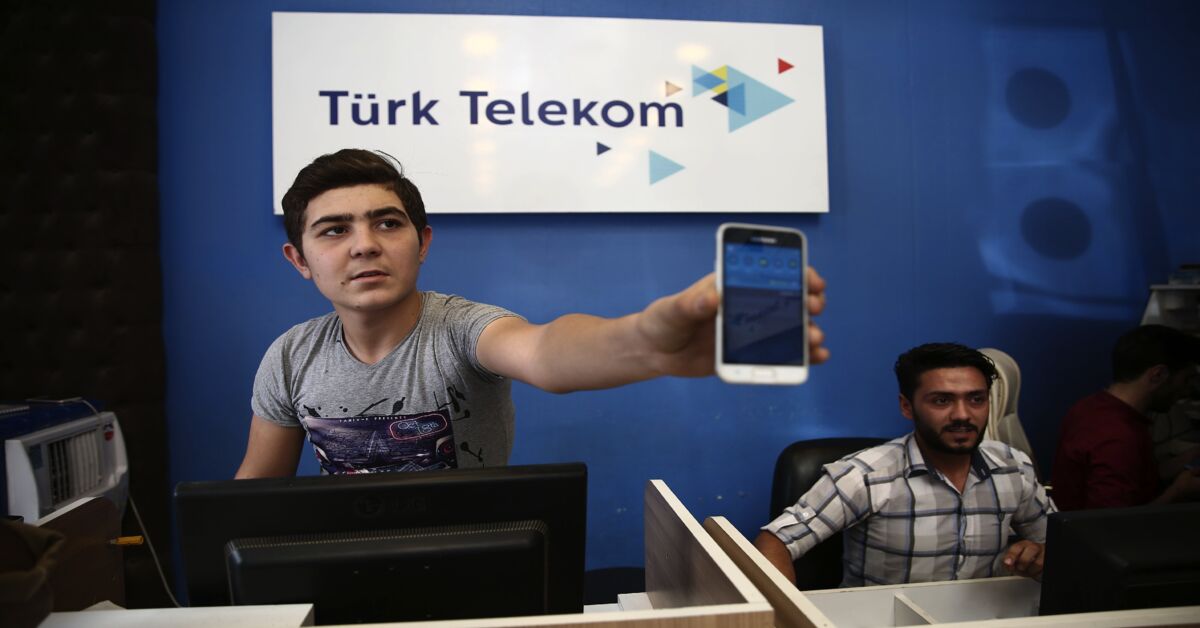 Turkey’s telecommunication giant Turk Telekom — sold off for $6.55 billion in 2005 in what was Ankara’s largest-ever privatization — appears back on its way to government control via a sovereign wealth fund in a potential deal that would set another re-nationalization milestone in the country’s telecom industry.

Turk Telekom’s privatization ended up in shambles when the buyer of the 55% controlling stake — OTAS, a subsidiary of Oger Telecom, owned by the Lebanese Hariri family and Saudi Telecom — defaulted on a multibillion-dollar loan issued by a consortium of Turkish and foreign banks. The saga, which left Turk Telekom eviscerated and riddled with debt, culminated in creditor banks taking over OTAS’ 55% stake in 2018.

The Turkey Wealth Fund, chaired by President Recep Tayyip Erdogan, sees telecommunications as a strategic sector and appears bent on acquiring the 55% stake in the now revamped Turk Telekom, sources from the banking sector told Al-Monitor, adding that bargaining over the price is going on between the fund and the banks. An eventual deal would reinstate the public sector as the biggest actor in the telecommunications industry after a similar acquisition by the fund last year. Of the remaining shares of Turk Telekom, 30% are already publicly owned and 15% are on free float.

The banks, which had taken over Turk Telekom grudgingly, set up a special purpose vehicle to restructure the company and then sell their shares. For the banks, Turk Telekom was a risky burden with potential repercussions for the entire Turkish banking system. The rise of online communications during the COVID-19 pandemic is said to have helped efforts to regenerate the company. The Wealth Fund reportedly moved to acquire the controlling stake against the prospect of foreign buyers.

The special purpose vehicle company, called Levent Yapilandirma Yonetimi (LYY), was set up by Akbank, Isbank and Garanti, all major Turkish banks. While trying to rehabilitate Turk Telekom, the banks have also been on the lookout for potential foreign buyers. The Wealth Fund’s move to acquire the controlling stake appears likely to succeed and preclude foreign ownership. Turk Telekom’s license expires in 2026.

When OTAS took over the controlling stake in 2005, the Turkish treasury owned the remaining 45% share in Turk Telekom. In 2008, a 15% stake from the treasury’s share was offered to the public. In 2017, the treasury transferred another 6.68% to the Wealth Fund.

The privatization deal rested on a license for Turk Telekom to use public networks, equipment and immovable properties for 21 years and three months. In other words, OTAS was supposed to hand all those resources and a debt-free Turk Telekom back to the government in 2026.

Following the tender, OTAS paid the down payment and the first of five installments of the remaining sum. In 2007, it announced it wanted to pay its entire outstanding debt in one go. The company secured a major loan from an international consortium, using Turk Telekom’s cash and immovable properties to meet obligations.

To maintain its competitive power, Turk Telekom had to make new investments as well. Additionally, it paid $500 million for a 40% stake in mobile phone company Avea in 2006. Nine years later, it acquired the remaining 20% stake of Avea from Isbank for $340 million.

As a result of borrowing to finance acquisitions and investments, Turk Telekom’s debt-to-equity ratio increased six times from 2007 to 2016. In May 2013, OTAS took another loan worth about $4.5 billion and 212,000 euros, using all its Turk Telekom shares as collateral. It was that loan on which it defaulted in September 2016.

The company, which used to be a profitable one in earlier years, was 724 million Turkish liras in the red in 2016 amid increasing borrowing costs due to the gradual slump of the lira.

The Electrical Engineers Chamber lamented Turk Telekom’s privatization as a “fiasco.” A publication by the chamber read, “The country’s economy has been deprived [of] the tax revenues generated from a giant entity such as Turk Telekom. But not only that. Our country has slid back in terms of communication and informatics technologies, which have become the mainstay of the global economy. Turk Telekom employees seen as redundant have been laid off, becoming an idle labor force in the public sector pool. And where did the savings secured through the layoffs go? To the Hariri family.”

Ultimately, Turk Telekom announced in August 2018 that the Treasury and Finance Ministry had approved the creation of a special purpose vehicle by creditor banks to take over OTAS’ 55% stake in the company.

The three banks — Akbank, Isbank and Garanti — mandated Morgan Stanley as a financial adviser in what they described as a process aimed at transferring Turk Telekom shares to a “competent” investor.

Meanwhile, Turk Telekom began to perk up. It posted net profits of 554 million liras in 2019 and 1.1 billion liras in 2020. According to market analysts, the company’s profits owed primarily to “a robust growth in the fixed internet business and a strong operational performance, backed by savings in personnel expenditures” as well as a decrease in effective tax rates in 2020.

In a statement in August, Turk Telekom CEO Umit Onal called the company’s performance an “amazing transformation” and drew an optimistic picture for 2021. “We now expect our operating revenues to grow 17% YoY, our EBITDA to be TL 15.8 billion and our capex to be TL 8.5 billion. I am truly excited about experiencing the post-pandemic world,” he said.

Thus, the Turkey Wealth Fund — often embroiled in controversies since its creation in 2016 — has moved to acquire the 55% stake in Turk Telekom after the company began to regain appeal and its managers were hoping to attract foreign investors. Last year, the fund gained control of Turkcell, the country’s largest mobile phone operator, after taking over the stake of the company’s main shareholder, Sweden’s Telia, for $530 million. Its eventual acquisition of Turk Telekom’s majority stake would make it the owner of Turkey’s two largest telecommunication companies. The fund holds all shares of satellite provider Turksat as well.