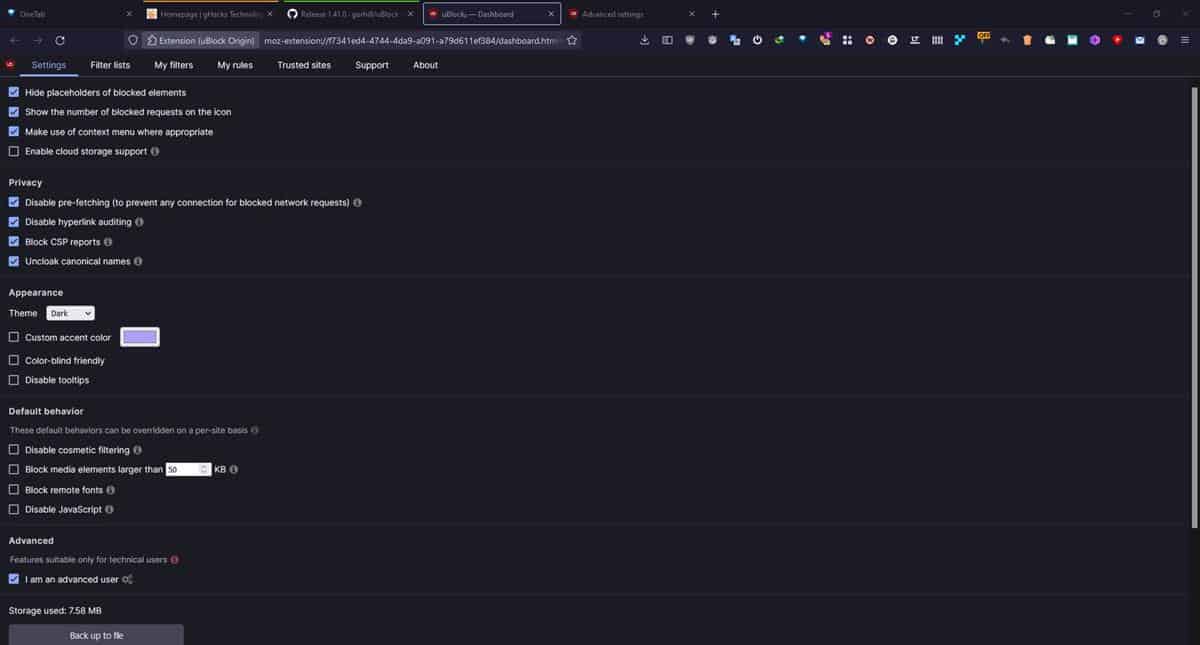 The open-source ad blocking extension, uBlock Origin, now has a dark theme for its interface. This had been one of the most requested features by users.

The dark mode was initially tested in the dev build of the extension, before it was brought over to the stable version.

Once you have updated to uBlock Origin 1.41.0, you can open the Dashboard, switch to the Settings pane, to find a new section called Appearance. It has a drop-down menu that lets you switch to the Dark theme, Light theme, or set it to change the theme automatically based on your browser’s settings.

The extension also supports custom accent colors that you may choose from the color palette.

Back in December 2021, I wrote that uBlock Origin introduced a workaround, that blocked YouTube ads from bypassing the add-on’s filters, just after the browser had been launched by the user. The issue was that Chromium based browsers sent network requests to servers to resume the activity of the tabs from the previous session. The extension’s latest version introduces a  setting that fixes the problem. It prevents all network activity when the browser is launched, and waits for the add-on’s filter lists to be loaded, to block the ads, after which the tabs are loaded with proper filtration of the ads. The new option is enabled by default, and can be toggled from the Filter Lists tab. It is labeled “Suspend network activity until all filter lists are loaded”.

The new version of the extension will not use background images on web pages as the best candidate in the Element Picker mode. This will allow users to pick elements in the foreground of web pages, for example, a nag banner that prompts you to accept the site’s cookies before you can click on other elements on the page.

Websites which implemented FingerprintJS V3 were reportedly not allowing video playback after detecting the extension. A commit to the ad blocker’s code fixes this issue. The uBlock Origin 1.41.0 update also resolves a conflict with the WebRTC Protect extension. The minimum requirements for uBlock Origin has been raised, and you will need to have Firefox 68, or Chromium 66, or Opera 53, to use the latest version of the ad blocker. The version bump was made in order to remove support for the classic popup panel, the legacy UI was in fact deprecated when the extension was updated to 1.27.0.

uBlock Origin 1.41.0 has already been submitted on the Firefox AMO, Chrome Web Store, Microsoft Store, and Opera Add-ons. The latest version has not been approved yet, but will soon be available as an auto-update.

I don’t recommend this, but if you want to test the dark theme right now, you can do so by installing the dev build of the add-on from GitHub. These builds are not signed like the store versions, so use it at your own discretion. Firefox users can turn to the nightly build of the browser, and set the value of the following preference to False in the about:config page. xpinstall.signatures.required.

This will allow you to switch the Appearance of uBlock Origin to the Dark theme, as described earlier in this article.