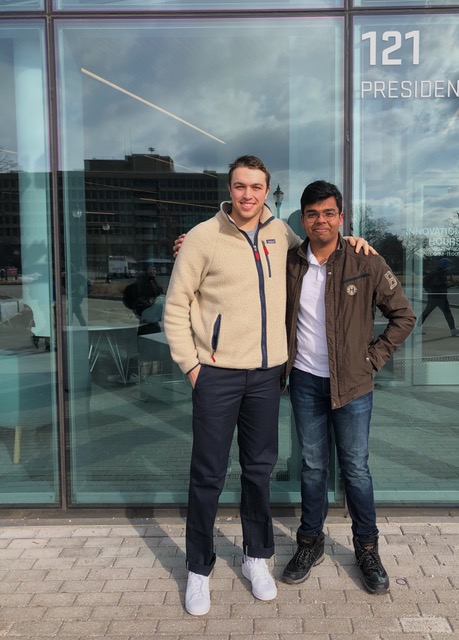 Techrupt Innovations, a technology partner that bridges the gap between entrepreneurial ideas and expert solutions, has been incorporated for just over 130 days. But the company’s newness hasn’t inhibited its ability to collaborate with fresh minds and build a name in the tech industry. The best part? It’s entirely student run.

The business venture was founded in October 2021 by two UMass Amherst sophomores: Ben Chrzanowski, a finance major in the Isenberg School of Management, and Vishesh Gupta, a computer engineering major in the School of Engineering. The third founder, Setuj Gupta, was brought on by Vishesh and is a student at Netaji Subhas University of Technology in India.

Together, the three students work with a team of professional software developers to help turn the seed of a business idea into a real, functioning business by creating apps, software or websites. In short, Techrupt Innovations (TRI) provides technical support to early-stage startups.

“We were like, ‘What if we can help every single other person who has an idea for an app, an idea for a software, an idea that will change the world?’” Chrzanowski says. “‘What if we could help them start a company, too? And we could be a part of that company, help them build and come up with ideas.’ That’s what sparked this, the idea that we could empower other people to accomplish their dreams.”

Chrzanowski and Vishesh were first brought together through the university’s Entrepreneurship Club, which they both joined this past fall.

“Out of all the people that came to the meeting, I saw an immense amount of energy coming out of Ben,” Vishesh says. “I could see the passion in his eyes and I was like, ‘I have to go talk to him.’ That was how it all started.”

As the pair began brainstorming startup ideas, they realized that everything they had in mind was too similar to what others were trying to do. This prompted them to reevaluate their business angle so that they could stand out in a saturated market. Now, instead of propelling their own mission, they set out to help others advance theirs.

Techrupt, whose namesake is a combination of the words “technology” and “disrupt,” does more than just cater to entrepreneurial apps, software, or website development needs. In addition to the company’s team of 11 engineers, many of whom have come from top universities, as well as from companies like Facebook and Microsoft, it also has a social media team that assists with the business side of things, including marketing strategy, so that those working with Techrupt Innovations receive well-rounded evaluations and solutions across the board.

In the past five months, some of their projects have included building a software solution for Closer Collaboration (an HR recruiting platform); acquiring 20 percent of LuvHut (a Boston-based dating app) and developing their application; and partnering with and becoming an equity partner in Game Class (an online company that teaches children through video games).

Much of Techrupt’s success can be credited to their top-notch technological products, Vishesh explains. With their apps, for example, they pride themselves on performance. This includes characteristics like quick speed, simple experiences and a variety of other features.

“We have the term, ‘Silicon Valley standards,’” Chrzanowski says. “We want everything to look and feel like it came out of Silicon Valley even though it’s coming from two college kids and their team of engineers and designers. Keeping those standards and not accepting anything below perfection is key.”

In the near future, Techrupt plans to work with two additional companies, which TRI will announce in the upcoming months. Chrzanowski notes that he, Vishesh and Setuj have to be selective with who they work with because it’s imperative that visions between TRI and the entrepreneur align. Plus, as full-time students, they couldn’t take everyone on even if they wanted to.

Outside of academics and TRI, Chrzanowski plays Division I baseball for UMass Amherst and Vishesh is a resident assistant in Kennedy Hall. If all goes well, they intend to work with at least five more entrepreneurs and tech startups by the end of 2022.

“It could take only one of those companies [that we partner with] to keep Techrupt running for the rest of time,” Chrzanowski says. “If you think about that, all we really need is for one of those companies to have outstanding success for Techrupt to be a full-time job for us when we’re out of college. Still, our number one goal is to make sure that [the companies we work with] succeed. If they succeed, that means that we did our job well.”

To learn more about Techrupt Innovations, visit their website at techruptinnovations.com.

Sophia Apteker is a junior at UMass Amherst majoring in journalism and integrated marketing communication while also pursuing a creative writing specialization. She is a content writer for her university’s chapter of Her Campus where she enjoys writing about lifestyle, entertainment, and wellness. When she’s not sifting through Spotify for her new favorite song, she’s probably laughing at her own jokes.