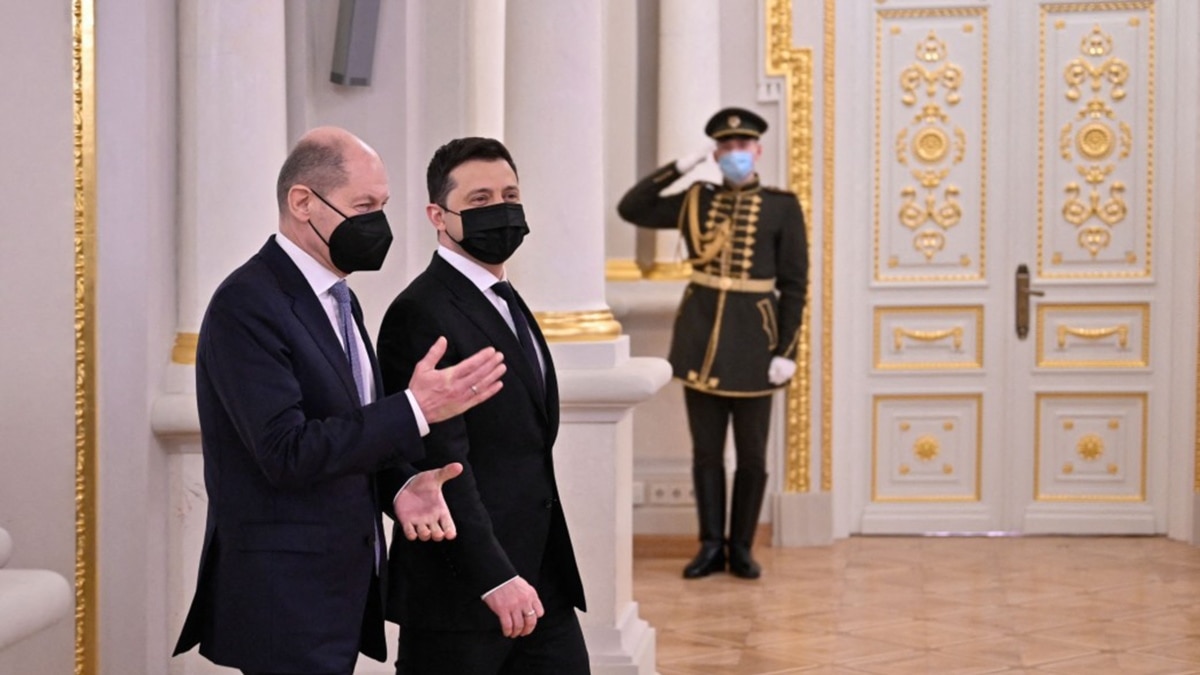 German Chancellor Olaf Scholz said Monday that Western countries “are ready for a serious dialogue with Russia on European security issues” but also are looking for Russian President Vladimir Putin to de-escalate his threat of an imminent invasion of Ukraine.

Scholz offered a new opening to the Kremlin after meeting with Ukrainian President Volodymyr Zelenskiy in Kyiv, even as the U.S. and its allies have warned that Putin could launch a massive attack on Ukraine within days with a missile and aerial bombardment followed by a swift ground invasion.

There was no immediate comment from Russia on Scholz’s remarks. Earlier, however, Russian Foreign Minister Sergey Lavrov suggested to Putin that he continue talks with the U.S. and NATO countries, even though the West has rejected Putin’s main demand to rule out possible Ukraine membership in the NATO military alliance.

A NATO official, in an email to VOA, characterized the tense standoff as “a dangerous moment for European security. A major conflict in Ukraine could see large numbers of displaced people fleeing the fighting. There is still time to avoid such unnecessary suffering. Everything must be done to avoid this kind of an impact on civilians.”

Zelenskiy said in a video address to the nation Monday that he had heard Russian military action could begin on Wednesday, and said he was proclaiming the day as one of national unity. He did not say how he got the information.

Meanwhile, with the threat of a Russian attack on Kyiv, U.S. Secretary of State Antony Blinken said the United States was temporarily relocating its embassy operations to the western Ukrainian city of Lviv, near the Polish border.

“We are basing our assessment on what we are seeing on the ground with our own eyes, which is a continued and unprovoked Russian buildup on the border of Ukraine, and no accompanying evidence of de-escalation,” he said.

Pentagon press secretary John Kirby said Monday, “Even over the last 24 to 48 (hours) … Mr. Putin has added military capability along that border with Ukraine and in Belarus. He continues to do the things that you would expect one to do if one was planning on a major military action.”

In Moscow, Lavrov, sitting far apart from Putin at an extraordinarily long conference table, told the Russian leader that although the U.S. and NATO have refused to halt weapons shipments to Ukraine or roll back their forces in Eastern Europe, they have offered to negotiate on missile deployment in Europe and military exercises in NATO countries closest to Russia.

Asked by Putin whether it made sense to continue to engage diplomatically with Western leaders, Lavrov replied that the talks “are far from being exhausted,” and he proposed continuing them.

Lavrov said the discussions “can’t go on indefinitely, but I would suggest to continue and expand them at this stage.”

In Kyiv, Scholz announced new credit of $170 million from Germany to Ukraine but reiterated that the West was ready to impose “very far-reaching and effective (economic) sanctions” against Russia if it invades Ukraine.

A reporter for VOA’s Russian Service says propaganda from Russia has been increasing in Ukraine’s eastern Donbass region, where pro-Russian separatists occupy territory. Sources say it has been relatively calm in the region, with no Ukrainian military causalities there for more than a month. However, they say the local population is increasingly nervous because of a rise in local propaganda that is echoed by media outlets in Russia, raising the prospect of an invasion.

Russia has surrounded Ukraine on three sides with an arsenal of armaments and 130,000 troops, from its ally Belarus to the north, from Russian territory to the east and in the south with a deployment of warships patrolling the Black Sea alongside the Crimean Peninsula it annexed from Ukraine in 2014.

The U.S. says its intelligence suggests that Russia could invade Ukraine at any moment and urged Americans living there to leave the country immediately. Some commercial airlines have stopped flying to Ukraine because of the fear of imminent warfare.

Scholz told reporters Sunday that Russia’s buildup of troops along the border with Ukraine is a “very, very serious threat,” and that his Monday visit to Kyiv and a Tuesday stop in Moscow for a meeting with Putin are about finding “a way to ensure peace in Europe.”

Ukraine on Sunday requested that Russia and the other members of the Organization for Security and Cooperation in Europe meet within two days to discuss the Russian troop movements.

Ukrainian Foreign Minister Dmytro Kuleba said on Twitter, “If Russia is serious when it talks about the indivisibility of security in the OSCE space, it must fulfill its commitment to military transparency in order to de-escalate tensions and enhance security for all.”

The U.S. mission to the OSCE expressed its support, saying in its own message, “The time for transparency is now.”

Russia has denied any plans to invade Ukraine, but the diplomatic talks have stalemated.

Biden assured Zelenskiy in a phone call Sunday of the U.S. commitment to “Ukraine’s sovereignty and territorial integrity.”

The White House said in a statement that Biden “made clear (to Zelenskiy) that the United States would respond swiftly and decisively, together with its allies and partners, to any further Russian aggression against Ukraine.”

It also said Biden and Zelenskiy “agreed on the importance of continuing to pursue diplomacy and deterrence” to the feared Moscow invasion.

Biden has ruled out sending U.S. troops to fight alongside Ukrainians in the event of a Russian invasion, while vowing to impose “swift and severe” economic sanctions.

National security adviser Jake Sullivan told CNN’s “State of the Union” show that the U.S. cannot predict whether Russia might invade this week or after the Beijing Olympics end next Sunday, but that there is “a distinct possibility there will be a major military action.”

While the U.S. has warned for several months of the threat of a Russian attack, Sullivan said “in the last few days,” Moscow has accelerated its military buildup.

In an hour-long call Saturday with Putin, Biden warned the Russian leader that invading Ukraine would cause “widespread human suffering.” Biden said the United States and its allies remained committed to diplomacy to end the crisis but were “equally prepared for other scenarios.”

The Western allies have called the idea of Russian veto power over NATO membership a non-starter, but said they are willing to negotiate other security issues, such as the positioning of missiles in NATO counties closest to Russia and NATO troop training exercises.

VOA’s Jeff Seldin, Steve Herman and Andrey Golovlev contributed to this report. Some information in this report came from The Associated Press and Reuters.