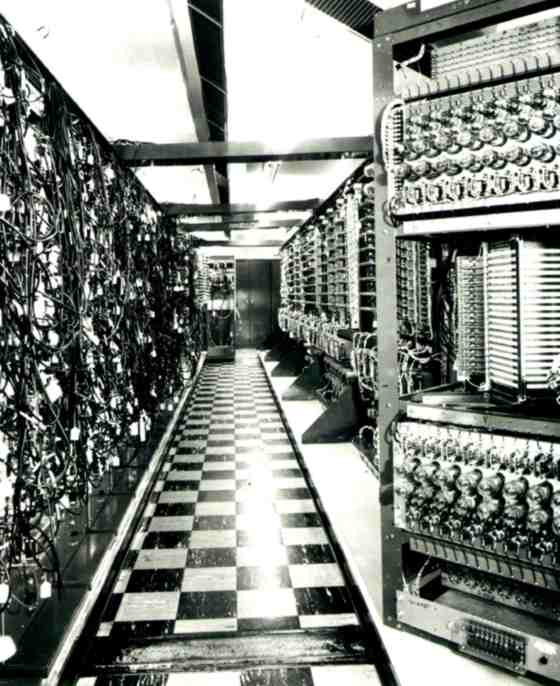 On May 27, 1957 MIT shut down its Whirlwind I computer, after almost a decade of service. The world’s first real-time digital computer, Whirlwind was the first to use magnetic-core memory, a breakthrough made by Jay Forrester.

Whirlwind was developed by the MIT Servomechanisms Laboratory for the US Navy, which required an aerodynamic stability analyzer to be used as a primitive flight simulator to train  bomber crews.

Jay Forrester was put in charge of the project and his team initially built a large analog computer for the task, but found that it was inaccurate and inflexible. While thinking about the problems of fast analog computation Forrester heard about the digital computers being built at Harvard. He talked to Presper Eckert and Johnny Von Neumann and was convinced that a fast digital computer was what was needed. Accordingly in early 1944 a digital computer project was started at the servo lab at MIT and speed was the absolute goal.

Whirlwind became operational in 1951 and was the fastest machine ever built. Its list of “firsts” are long and impressive but what really matters is the simple fact that the Whirlwind was the first computer capable of real time computations. It could add two 16-bit numbers in two microseconds and could multiply them in twenty microseconds. Of course, the Whirlwind was huge, but it only used 4000 valves, which was less than a quarter of the valves used in ENIAC – a much less powerful machine.

While the noticeable firsts were its bit parallel design and magnetic core memory, Whirlwind was also the first machine to use a CRT display for its output.

As well as requiring speed, Whirlwind needed to be reliable in an era where valves failed after about 500 hours. Forrester studied what made the valves fail and discovered that the cause was the silicon added to make the refining of the nickel easier. Silicon-free nickel cathodes increased the life of the average valve by a factor of a thousand. A second, remarkable, innovation increased the reliability of the machine still further. Whirlwind could alter the voltage on the grid of each valve to test for imminent failures. Only a servo engineer would have thought of this!

The Navy was about to to scrap Whirlwind when the Cold War broke out. It became very clear that the USSR could send a warhead over the pole and into the US before any one had time to notice it. A system based on Whirlwind was the only reasonable solution to the defence problem and Project Lincoln was set up to oversee SAGE – Semi-Automatic Ground Environment system – as a country-wide system built in deep caverns carved into mountains. SAGE was the source of a mythology of secret super computers in charge of the world’s arsenal of weapons.

For more of the history and the technology see Jay Forrester and Whirlwind and SAGE – Computer of the Cold War.