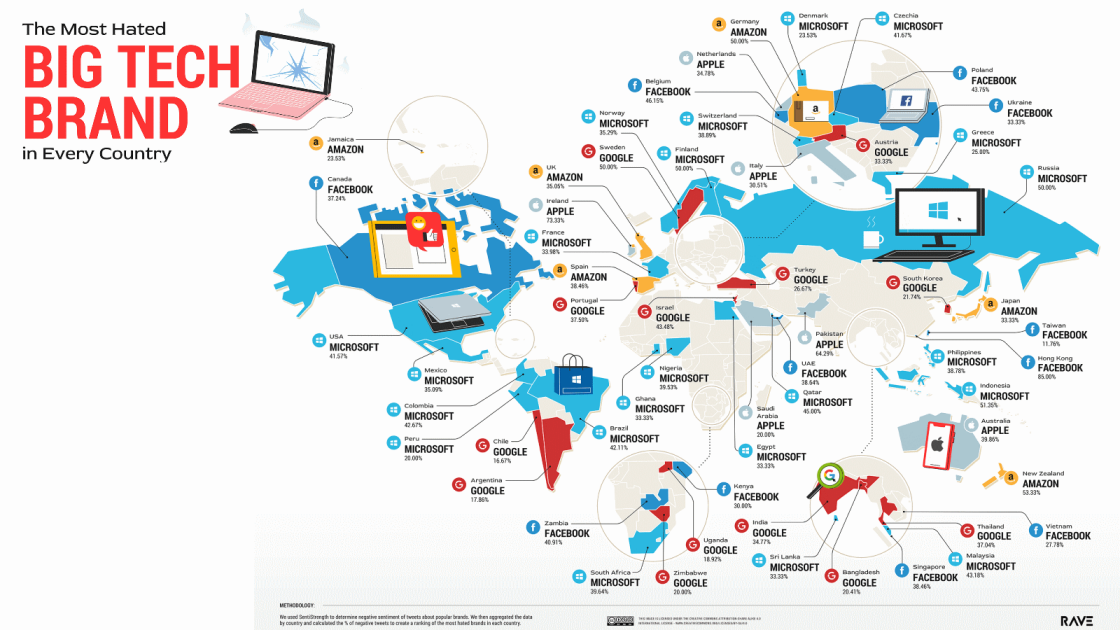 Wondering how you’d measure something like the most hated companies in your state, or the country, or even across the globe? Review site Rave figured it out. The results make for a colorful showcase of the brands we love to despise.

Rave created a list of every major US and UK company in the categories of fast food, gaming, and tech. It then used the SentiStrength language-sentiment-analysis tool to see how much smack-talk each brand has received on that ultimate tool for bitching and moaning: Twitter. Any of the over 1 million tweets analyzed that included a negative component went into the mix. (Any brand that had less than 10 negative tweets didn’t even make the list—it had to rate a -5 to -2 to be included.)

The most-hated-brands-by-country chart features a lot of hate for Sony—it’s got the most negative blab in Canada, for instance, at 49%. (Japan’s least fave: Netflix at 48.78%) But in the US, the top most-hated company based on social complaints is Uber, at 48.35%. We all know why. Keep in mind, these scores are bad, but they’re nothing compared with Toyota’s negative rep in Mexico, at 85.71%; in Zimbabwe, they found discovered 100% Pepsi hatred.

Look at the list of most hated tech brands again. It’s odd to see Microsoft in first place with 41.57%, but that’s only because Rave didn’t categorize Uber as a tech company. Microsoft is also not liked by a slew of other countries, 22 in total. The biggest MS hater is Indonesia, at 51.35%. Sony’s got the most hate-slingers in eight countries; Tesla had the most in seven.

Again, these rankings still mild compared with some countries that apparently boast a riled-up populace. Apple is the top target of people’s wrath in Ireland (73.33%) and Pakistan (64.29%), and it leads in four others as well. The highest hate count for Amazon is 50% in Germany, but it’s available in only 18 countries, or it might have done worse. The more global Facebook earned an 85% hatred score in Hong Kong, and Google garnered 43.48% in Israel.

Gaming takes a weird turn. The most hated game company in the United States (at 95.68%) and Canada (100%!) is Game Freak—the publisher behind the Pokémon series. Bad numbers indeed, probably prompted by tweets from those who could not collect them all. The gaming brand that garnered the most universal loathing is Ubisoft, in 23 countries. Capcom is second. But only Norway hates Nintendo (54.55%).

Last, look at the overall ranking for every brand rated negatively in the United States and weep for the parents who stepped on enough plastic bricks that they took their anger to Twitter and raged against Lego. It happened enough that the toymaker is in second place, at 46.43%—just behind Uber.

Recommended by Our Editors

Rounding out the top ten are Netflix, Red Bull, Nestlé, ESPN, and Toyota. The next most hated Big Tech brand is Apple at 34.91%, followed by Huawei, Google, Facebook, Amazon, and then Samsung; all are in the top 50.

Read the full report, which includes belly-aching about fast food, breakdowns by state, a user-changeable chart, and the complete methodology, at Rave’s website.

Get Our Best Stories!

Sign up for What’s New Now to get our top stories delivered to your inbox every morning.

This newsletter may contain advertising, deals, or affiliate links. Subscribing to a newsletter indicates your consent to our Terms of Use and Privacy Policy. You may unsubscribe from the newsletters at any time.