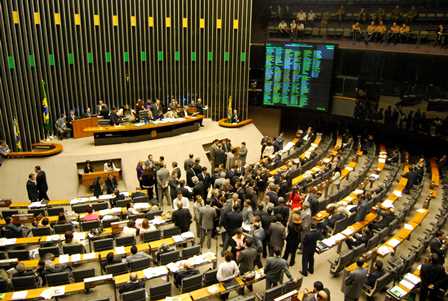 The opening of the Brazilian congress’ legislative session on Wednesday is seen by telecom operators as an opportunity for the approval of key bills concerning taxes, legal security and big tech regulation.

Experts tell BNamericas that the possibility of passing some of the proposals could be affected by the general elections in October.

On top of telecom operators’ legislative priorities is a far-reaching tax overhaul that could lighten the tax load of the sector.

“The sector defends a broad tax reform, one that leads to a reduction of taxes and duties levied on telecoms. Today we pay rates similar to those levied on superfluous goods, even though connectivity is essential in everyone’s lives”, said Marcos Ferrari, head of telco industry association Conexis, in a statement regarding the start of the legislative year.

The reality, however, is that bills that are either technically complex or politically controversial could be at risk of not being passed due to the upcoming elections.

A communications ministry source, who spoke on the condition of anonymity, told BNamericas that bills related to updating the pay-TV framework, whose discussions are more advanced internally through a task force created by the ministry; the application of resources from the telecoms universalization fund (Fust), following a change in the Fust regulation last year; and new forms of financing for telecom infrastructure projects, are the most likely to be passed by congress in 2022.

Bills that involve conflicting interests and requiring broad consensus, such as the tax reform, are likely to face difficulties this year in congress, the source said.

Yet, the heads of the senate and the lower house, Rodrigo Pacheco and Arthur Lira, have both said they believe a 2022 vote on the tax reform proposal is still possible.

The tax overhaul was also on President Jair Bolsonaro’s “wish-list” message to congress for the opening of the legislative session.

Márcio Kanamuru, head of telecom, tech and media at KPMG, agrees that a far-reaching tax reform can be a hard sell this year. The telecom industry is already at odds with the terms of two complementary proposals related to the reform that were submitted by the government to congress last year. Ferrari discussed this issue in detail with BNamericas in a previous interview.

When it comes to more telecom-specific interests and bills, Kanamuru sees the industry caucus in congress – a group of lawmakers focused on telecom affairs – as being more active, organized and engaged to defend the sector’s agenda.

“2022 will be a complicated year due to the elections, but at the same time there are lots of things advancing and many others that need to advance,” Kanamuru told BNamericas, mentioning 5G, financial instruments and industrial connectivity as examples.

“We are pushing ahead with a lot of infrastructure concessions and privatizations. And these demand major investments and also, in the context of 5G and the 4.0 industry, a lot of connectivity.”

In his message to congress, Bolsonaro also defended the privatization of postal service Correios, which is subordinated to the communications ministry.

As BNamericas reported previously, this is the only privatization related to the sector, of the five previously planned, that the current administration believes it can carry out in 2022, which is the last year of its four-year term.

Another tax-related bill deemed relevant for the sector and Conexis is the reopening of the special tax regularization program (Pert), which is seen as standing a good chance of passing this year.

Pert is a debt settlement program that allows individuals and companies, including those in judicial reorganization and under bankruptcy protection, to pay their tax debts in up to 144 installments.

The bill was passed by the senate last year with the vote still pending in the lower house, where it has been given “urgent” status.

In addition to tax-related proposals, a priority for telcos this year is the approval of bills aimed at curbing theft and smuggling of telecom cables and equipment.

According to Brazilian carriers, 6.7mn people had their telecom services interrupted in 2020 due to equipment damage. And around 2.3mn meters of cables were stolen in the first half of the same year, representing a year-on-year increase of 14.5%. The figures for 2021 have not yet been compiled by Conexis.

“The telecommunications sector defends a coordinated public security action involving the judiciary, the legislative and the executive [branches], both at federal, state and municipal [levels], and the approval of bills that toughen penalties on these crimes and help to combat these criminal actions,” Conexis said in a statement.

There are at least three bills being discussed in congress related to the issue, with the most advanced being 5846/2016, which is halfway through at the lower house’s constitution, justice and citizenship committee, and whose rapporteur is lawmaker Felipe Francischini. This is the bill that Conexis and the telcos are placing their bets on for this year.

Telecom operators argue that while the voice and data services that carriers offer are taxed and closely regulated, the same do not apply to internet-based messaging services, such as WhatsApp.

The operators also argue that these OTT services are not subject to the same strict quality regulations nor prescind legal contracts signed with users to operate – contrary to what is required by carriers in their relationship with customers.

“The equality of conditions between the services is essential for competition,” Conexis said.

At the municipal level, telcos expect to see the approval of laws expediting the licensing of cellular antennas and related infrastructure.

Speeding up the installation of antennas is essential to expand connectivity in cities, not least because 5G will require many more sites than 4G to cover the same area extension.

Under the terms of last year’s 5G auction, the technology must be up and running in all state capitals by July this year.

Operators defend mechanisms such as the “positive silence”, or tacit licensing, according to which the installation of antennas is automatically approved if the municipal authority does not respond to the licensing request in a period of up to 60 days.

Bill 8518/2017, which amends the 2015 antennas law to include tacit licensing, is an “opportunity in this sense” and is ready for a vote in the lower house, according to Conexis.