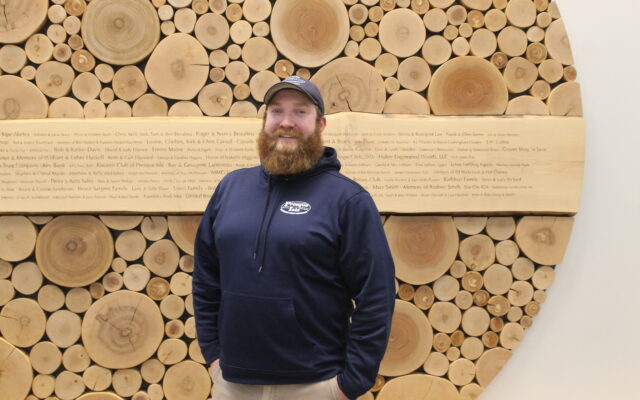 Josh Stahl has never been one to shy away from the great outdoors. What started out as a childhood interest quickly turned into Stahl’s passion. Now, at only 30 years old, Stahl is living out his dream job working in Presque Isle.

PRESQUE ISLE, Maine — Josh Stahl has never been one to shy away from the great outdoors. What started out as a childhood interest quickly turned into Stahl’s passion. Now, at only 30 years old, Stahl is living out his dream job working in Presque Isle.

Stahl grew up in Millinocket, and in his younger days enjoyed playing sports like hockey and football, and spent his free time out in the woods, hiking and biking. He also became very involved in archery, becoming proficient with a bow, and even winning some medals in competitions.

Stahl decided to take his love of the outdoors and try to incorporate it into his education. He attended University of Maine at Presque Isle in 2009 to study criminal justice with the hopes of becoming a game warden.

Over time, he met other students who were involved with the school’s recreation degree program. Changing career paths to recreation aligned with his preference to design programs for the outdoors, rather than policing it.

Post college, Stahl became a recreation guide in his hometown of Millinocket at 21 years old. He then became certified with basic emergency medical services skills, and did that work on and off for four years.

Right before he began working for Presque Isle, Stahl was looking to become a Customs And Border Patrol agent, but his eyesight prevented him from getting the job at the time. He later had surgery to correct his sight problem.

After that, Stahl heard from a friend that Presque Isle was looking for a new outdoor events coordinator. So, Stahl returned to the hometown of his alma mater, and the rest is history.

“It just seemed like a really good opportunity,” Stahl said.

Since his arrival in March 2020, Stahl has put in the hours to make the outdoors as accessible as possible. He has set up an adult archery program for the spring and fall, drawing on his experience with the sport. He has assisted with programs in mountain biking, kayaking and has even hosted playing games in the park.

“Kids nowadays are on the phones all the time,” Stahl said. “When I was young, we didn’t have all that. We got together with friends and played Scatter and Capture the Flag.” Stahl used those memories to help a new generation of kids enjoy the games from his childhood.

Stahl’s biggest goal is to expand access to outdoor programming in Presque Isle so that as many people as possible can enjoy the outdoors. While finding the target audience can be challenging, Stahl has tried breaking through to other digital platforms, such as Instagram and Tik Tok.

Stahl finds his inspiration in his good friend Andy Borth, a park ranger at Baxter State Park, who inspired him to become a river guide and helped jumpstart his career into the world of outdoor recreation. He said he also is inspired by Presque Isle’s Director of Recreation and Parks Gene Cronin, who has put his own passion into the recreation department, making Stahl want to do more.

Josh Stahl’s outdoor experience speaks for itself, and with his goal of expanding access to outdoor recreation, he is poised to continue to do great work for the city of Presque Isle.

“Keep your eyes open and come out and try something new,” Stahl said. “We are doing some awesome stuff, and it might be an experience that you may not have thought of.”