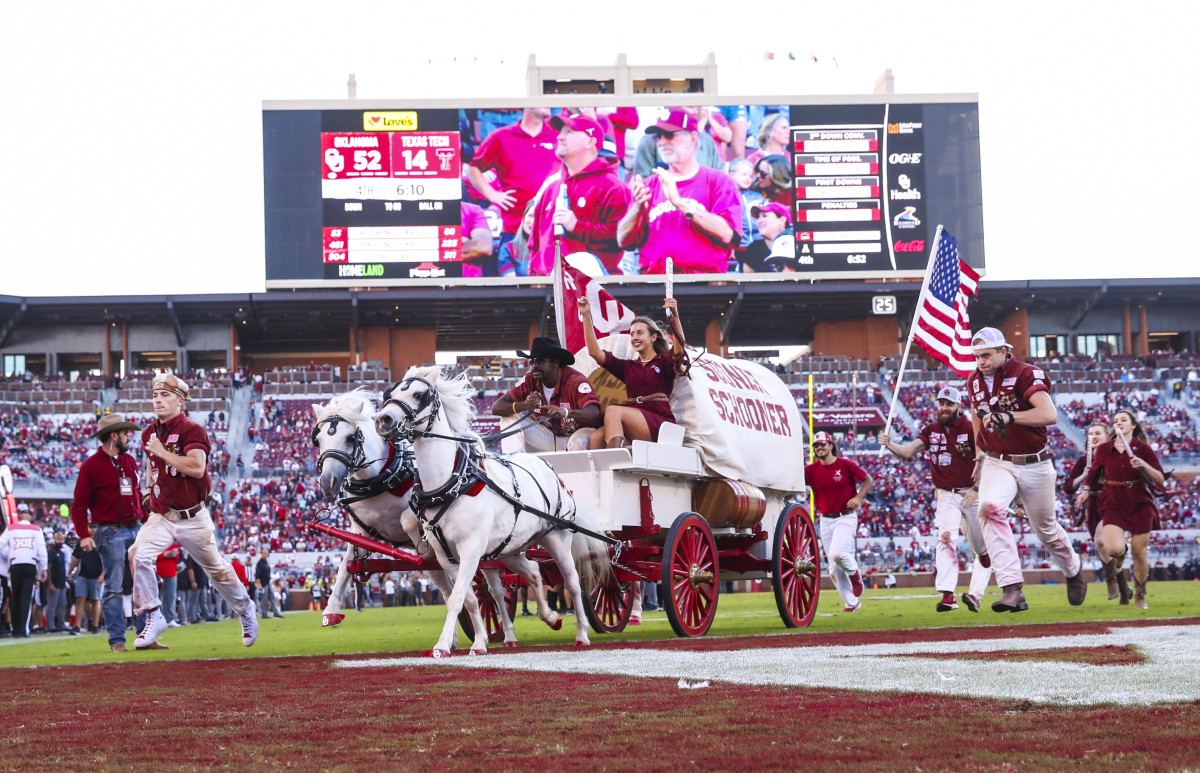 Oklahoma’s annual spring game will be more than a celebration of Baker Mayfield this season.

Brent Venables and his coaching staff will be hosting an impressive list of recruits this weekend, numbering over 30 players from the next three recruiting cycles.

Class of 2022 signees Jake Taylor, Jacob Sexton and R Mason Thomas will all be in Norman to take in the festivities as the trio of recruits are set to join the team this summer.

Current 2023 commits Jackson Arnold and Joshua Bates will also be on campus this weekend, and they’ll be fast at work helping the staff make an impression on a slew of other top players and the coaching staff turns their attention to the 2023 and 2024 recruiting classes.

Elite offensive tackle Cayden Green will be back in Norman as Bill Bedenbaugh continues to work to add the talented player to the fold in the 2023 class. Green recently named the Sooners into his final five schools alongside Miami, Michigan, Nebraska and Missouri.

Talented 2023 wide receiver Jaquaize Pettaway also confirmed with SI Sooners that he would be in town for the weekend.

Pettaway caught 50 passes for 794 yards and seven touchdowns last year for Langham Creek High School in Houston, TX, and has shown he can stretch the field to try and take the top off of defenses.

Running back Dylan Edwards will make the trek down to Norman from Derby, KS for the weekend. Edwards has rushed for 4,436 yards on 414 carries the past two seasons, scoring 63 touchdowns on the ground.

On the other side of the ball, the Sooners will also host in-state defensive lineman Bai Jobe, who’s recruitment has blown up over the past year.

Bedenbaugh will have a host of other 2023 offensive lineman in this weekend, as Payton Kirkland, Trevor Goosby and Logan Howland will all be on hand Saturday.

A pair of secondary targets for the 2023 class will attend the spring game in safety Jalon Kilgore and cornerbacks Tyre Young and Tayden Barnes, as well as linebacker Caleb Otlweski and defensive end Parker Andrews.

Jeff Lebby is hosting a trio of quarterbacks as well.

Michael Hawkins Jr., son of former OU corner Mike Hawkins, is rated a 4-star quarterback in the 2024 class and returns to see his father’s alma mater.

A pair of 2025 prospects are also in Norman this weekend in Orlando native Bjorn Jurgensen and Madison, MS, product Emile Picarella.

Safety Tito Williams is a 2024 target Brandon Hall will be hosting this weekend, and athletes Mario Craver and Jackson Ford are also on campus.

Cale Gundy will be able to continue to recruit 2024 wide receiver Kennedy Brantley as well, as Brantley is in Norman from Melissa, TX.

A pair of Oklahoma prospects from the 2024 class are on campus as well in Norman North offensive lineman Harrison Utley and Poteau standout Dax Collins.

Joe Jon Finley will look even further down the road, as he has a 2025 prospect attending the spring game in Allen, TX, tight end Davon Mitchell.

The 6-4 tight end already holds offers from North Texas and Incarnate Word, and hopes to continue to have the offers to roll in over the summer.

Beyond the spring weekend, Venables and his staff have multiple elite camps planned, as well as the return of Oklahoma’s June barbecue blowout this summer where the Sooners will again look to bring tons of elite athletes on campus.

Want to join the discussion? Click here to become a member of the AllSooners message board community today!

Sign up for your premium membership to AllSooners.com today, and get access to the entire Fan Nation premium network!