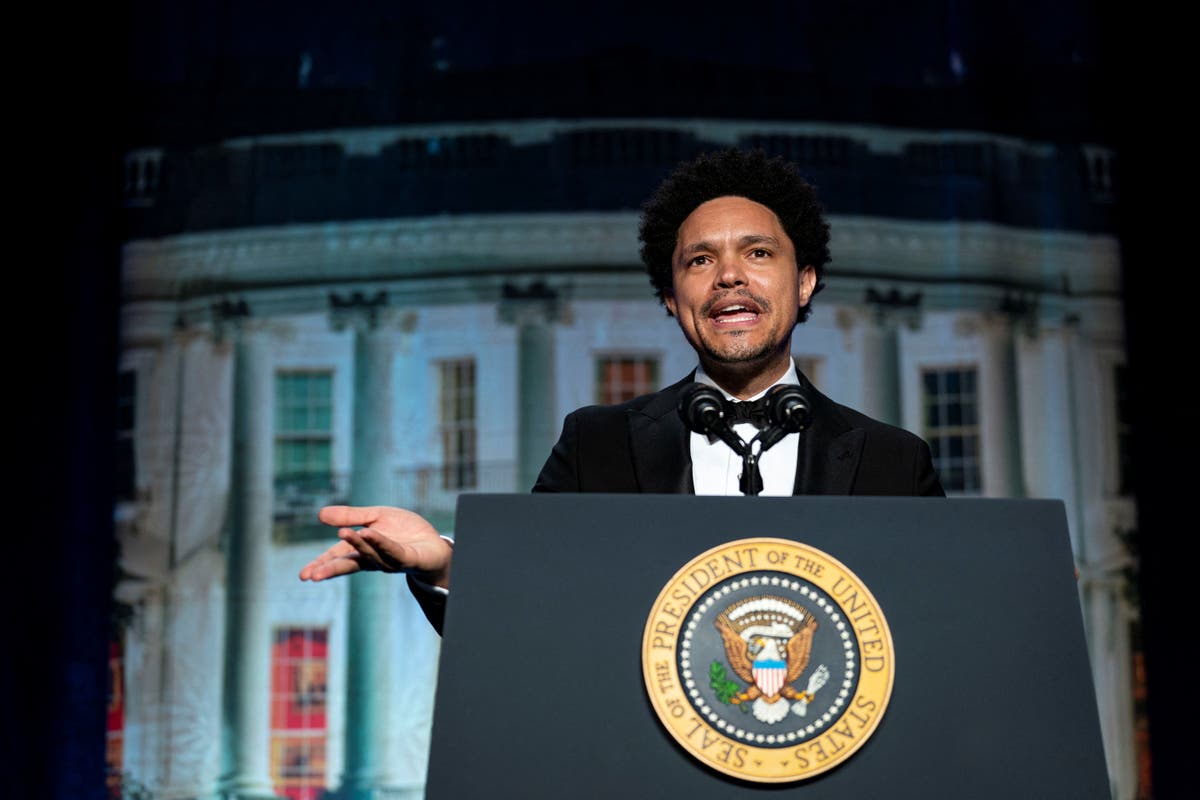 Comedian Trevor Noah mocked Washington for hosting what he called a “superspreader event” during the White House Correspondents’ Dinner on Saturday evening.

“It is my great honor to be speaking tonight at the nation’s most distinguished superspreader event,” he said to laughs.

The host of The Daily Show mocked Washington’s elite for hosting a mass indoor gathering just a few weeks after multiple members of the Biden administration and members of Congress contracted Covid-19 following the Gridiron Dinner, another formal Washington event.

“For real, what are we doing here? Did none of you learn anything from the Gridiron dinner? Nothing?” he said.

“You guys spent the last two years telling everyone the importance of wearing masks and avoiding large in-door gatherings, then the second someone offers you a free dinner, you all turn into Joe Rogan,” Mr Noah said, in reference to the podcast host who has frequently peddled false information about the efficacy of Covid-19 vaccines.

He noted how the White House’s chief medical adviser Dr Anthony Fauci dropped out of the dinner.

Mr Noah also pointed to President Joe Biden’s low approval ratings and his propensity for gaffes. He noted how Mr Biden said Russian President Vladimir Putin could not be remain in power, which upset the Russian president until he learned “none of the stuff Biden wants gets done.”

To that point, Mr Noah poked fun at Senator Kyrsten Sinema of Arizona, one of the Democrats who has stalled Mr Biden’s Build Back Better legislation because of her opposition to raising taxes.

“Who ever thought we’d see the day in American politics when a senator could be openly bisexual, but closeted Republican,” he said.

Mr Noah’s performance was also a return to comedy for the dinner. Humorist Michelle Wolf rattled many journalists with her speech in 2018, which included pointed remarks and criticisms for both Trump administration officials and the Washington press corps. In response, the next year in 2019, the White House Correspondents’ Association, which runs the dinner, hosted historian Ron Chernow.

But Mr Noah did not just ridicule Democrats; he also made fun of various other politicians, including Florida Governor Ron DeSantis and his attempts to outflank former president Donald Trump from the right, promoting skepticism in vaccines and his signing of the state’s “Don’t Say Gay” bill, which restricts how LGBTQ+ issues are discussed in classrooms.

“Ron won’t even tell people if he got the booster, or as they say in Florida, ‘Don’t ask, don’t tell,’” he said, in reference to the now-repealed ban on gay people serving openly in the military.

“I think people need to be held accountable if they’re using their dad’s name to get ahead in life and I can’t think of anyone better to ask about that than Peter Doocy,” he said. Mr Doocy is the son of Fox & Friends co-host Steve Doocy.

Mr Noah didn’t stop there, kicking CNN+ when it’s down and ribbing NBC News’ Chuck Todd for his lack of follow-up questions.

Toward the end, though, Mr Noah hit a more serious note, talking about the importance of a free press.

““I stood here tonight and I made fun of the President of the United State and I’m going to be fine,” he said, repeating what Mr Biden said about how he could make fun of a president without repercussion like in Russia. Mr Noah noted how journalists in Ukraine were risking their lives.

“In America, you have the right to seek the truth and speak the truth, even if it makes people in power uncomfortable,” he said.